Press Release: Cryotherapy Market to Surpass US$ 413.2 Million by 2027

Cryotherapy, also called cryoablation, is a non-invasive therapy used for alleviating pain, treating abnormal skin, and localized tumors. Cryotherapy can be administered locally or on the whole body. Surgeons use cryo probes through which liquid nitrogen or high pressure argon gas flows, freezing and destroying tumor cells. An MRI, ultrasound or CT scan is used to guide the cryo probe to reach the treatment site. Cryotherapy can also be applied topically for treating skin and eye lesions. In topical cryotherapy, liquid nitrogen is applied using a cotton swab or a spraying device. A whole body cryotherapy (WBC) is used to help improve an athlete’s performance, and for early recover from injuries and muscular pain. Lack of evidence proving higher safety and effectiveness of WBC, however, is limiting the wide scale adoption of this therapy and thus, limiting growth of cryotherapy market. 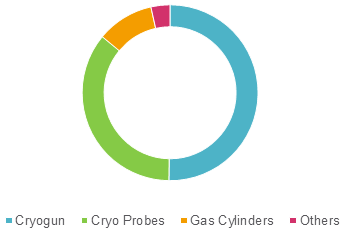 Increasing number of non-invasive and minimally-invasive procedures performed every year is expected to be the major driving force for the global cryotherapy market growth in the near future. The demand for non-invasive and minimally invasive procedures is increasing exponentially owing to increasing consumer preference on enhancing one’s physically features, and treating skin problems. For instance, American Society of Plastic Surgeons (ASPS) 2017 reports, there were 15.7 million minimally-invasive cosmetic procedures performed in the U.S. in 2017, which was a 2% increase compared to 2016.

Moreover, growing incidence of sports injuries, cancer, and cardiac conditions is also expected to propel the global cryotherapy market growth. For instance, according to the American Journal of Sports Medicine report of 2016, more than 3.5 million athletes aged 14 years and under, experience a sports related injury every year in the U.S. Around 77% of these injuries affect the lower leg, ankle, or foot. Cryotherapy is extensively used by athletes for relieving muscular pain and improving sleep quality.

Use of argon gas and cryo probes are approved for use by the U.S. Food and Drug Administration (FDA), however whole body cryotherapy products are not yet approved by the regulatory body. Lack of sufficient evidence regarding safety and effectiveness of WBC products compared to existing treatment therapies is likely to hamper the market growth. Moreover, in October 2015, the fatal incident of an individual succumbing to freezing cold in an unlicensed spa has raised concerns over the safety of whole-body cryotherapy. The National Institutes of health (NIH) is however supporting studies on use of cryo chambers as a method of whole body cryotherapy. Manufacturers such as the US Cryotherapy are also conducting studies to establish the safety and effectiveness of whole body cryotherapy, particularly cryo chambers.

On the basis of region, the global cryotherapy market is segmented into North America, Latin America, Europe, Asia Pacific, Middle East, and Africa. High healthcare expenditure in developed economies in North America and Europe is driving demand for cryotherapy in these regions. According to the National Health Expenditure Accounts (NHEA), U.S. healthcare spending increased by 3.9% in 2017, reaching $3.5 trillion, or $10,739 per person. The cryotherapy market in North America and Europe is fueled by increasing demand from increasing preference among consumers to recover from injury faster, and prevent aging.

Furthermore, market players are focused on developing innovative products in order to expand their consumer in emerging markets such as India, China, Brazil, and Argentina among others. Increasing prevalence of cancer and skin disorders is expected to dive demand for the cryotherapy in these countries. According to the report of Global Cancer Observatory published in May 2019 by the World Health Organization (WHO), in China 4.2 million new cases of cancer were diagnosed in both genders of all ages in 2018.

Cryotherapy is an alternative tumor treatment option, usually preferred in cases where removal of tumor using conventional surgery is not effective. Cryotherapy is also utilized in treating skin disorders, for anti-aging, muscle pain and recovery, and for muscle-related injuries. Cryotherapies are broadly classified as localized/surgical cryotherapy or cryosurgery and whole-body cryotherapy.

Cryosurgery is used for treatment of skin conditions, cancer, and pain management. Whole body cryotherapy (WBC) finds applications in health and fitness. Liquid nitrogen cooled sauna or cryotherapy chamber (exposed to fresh oxygenated cooled air) are some of the more non-conventional techniques employed in WBC. Cryotherapy chambers are usually preferred by cryotherapy centers or at home-facilities. Cryo-guns, cryo probes and gas cylinders are mainly used in hospitals and clinics for major cryotherapy procedures.

Increasing prevalence of cancer worldwide is expected to boost cryotherapy market growth. According to the National Cancer Institute, 2016, around 16.8 million new cases of cancer were diagnosed in the U.S., and 595,690 cancer-related deaths were estimated. Moreover, as per the same source, the number of people suffering from cancer is expected to reach 19 million by 2024. According to the Cancer Atlas, 2012, about 1.1 million new cancer cases and 600,000 cancer deaths are reported annually in Latin America and the Caribbean, where lung cancer is the leading cause of cancer-related deaths.

Physiotherapy, also known as physical therapy, is a treatment used to develop and restore proper functioning...