Earth Moving Equipment Market Report, By Product Type (Excavators, Loaders, Dozers, and Others), By Application (Construction and Mining), and by Geography - Global Forecast to 2026

Earth moving equipment is a heavy equipment designed for construction operations. Global earth moving equipment market is projected to exhibit CAGR of 7.7% in the forecast period (2018 – 2026). Increasing growth of the construction industry is one of the major driving factors, leading to high demand for earth moving equipment, globally. According to Chartered Institute of Building, by 2030, the construction industry is expected to account for 14.7% of the global GDP. Moreover, by 2030, the global construction market is projected to be valued at US$ 17.5 trillion up from US$ 8 trillion in 2015. Furthermore, increasing urban population is also a major factor, which has led to high demand for better infrastructure, thus aiding in growth of the construction industry. This, in turn is expected to positively affect growth of the earth moving equipment market. According to Population Reference Bureau, in 2017 the world population was 7,536 million, of which 54% of the population lived in urban areas, which is around 4,069 million. Moreover, according to the same source, in 2017, 78% of the developed countries population lives in urban area and 49% population of emerging countries lives in the urban area. In addition, the high cost of equipment is a major factor which hinders the market growth.

On the basis of product type, loaders segment held the dominant position in the market in 2017 and is expected to retain its dominance throughout the forecast period, owing to high productivity and low cost of maintenance. A loader is a heavy machine used in construction to move or load material in other machinery such as railroad cars, dump trucks etc. these machines are majorly used for backfilling ditches, digging basements or gun emplacements, lifting, and moving construction. Asia Pacific held the dominant position in earth moving equipment market in 2017. 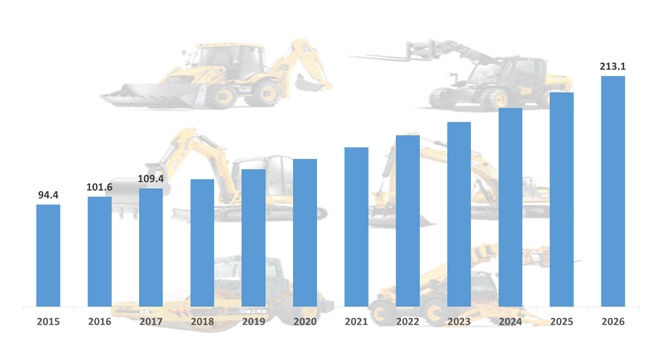 On the basis of geography, the earth moving equipment market is segmented into North America, Europe, Asia Pacific, Latin America, Middle East, and Africa. Asia Pacific earth moving equipment market held the dominant position in the global earth moving equipment market in 2017 and is projected to retain its dominance throughout the forecast period. This is owing to increasing government investment for the development of infrastructure by various countries in Asia Pacific. India, China, and Japan are the major growth engines in this region. High investments for infrastructure development by the Indian government have accelerated growth of earth moving equipment market in India. For instance, according to the India Brand Equity Foundation (IBEF), in the Union Budget 2018 – 2019, the government allocated US$ 92.22 billion for infrastructure. Moreover, increasing urban population in India has also increased demand for housing projects and this is expected to drive growth of the market over the forecast period. For instance, according to Population Reference Bureau, the total population of India was 1,352.6 million in 2017. Of this population, 33% lives in urban areas that is approximate 446 million. This is expected to aid in growth of the market in the region to a certain extent. Furthermore, rising number of construction projects in China is leading to increasing demand for earth moving equipment. For instance, after the announcement of ‘One Belt, One Road’ project by China government in 2013, the construction industry in the country is expected to witness a significant growth. The main aim of the project was to link three regions i.e. Asia, Africa, and Europe. In addition to this, increasing growth of the mining industry has also accelerated demand for earth moving equipment in this region. For instance: according to World Mining Congress, the mining production in Asia Pacific was 9.8 billion metric tons in 2016 and is expected to reach 11 billion metric tons by 2021. China and India are the major countries in mining producers in Asia Pacific. According to World Mining Congress, China held the first position in mining production and India held fifth position in mining production at global level in 2016.

Earth moving equipment is a heavy equipment designed for construction operations. The increasing construction industry become one of the major driving factor for the growth of the earth moving equipment market, globally. According to Chartered Institute of Building, in 2015 the construction industry generated the revenue of US$ 8 trillion and is expected to reach US$ 17.5 trillion by 2030. In addition to this, the increasing production of mining industry have also accelerated the demand for earth moving equipment, globally. For instance, according to World Mining Congress and Coherent Market Insights, the global mining production was 16.9 billion metric tons in 2016 and is expected to reach 19.3 billion metric ton by 2021.

Increasing mining industry in North America is one of the major driving factors for growth of the earth moving equipment market in this region. The U.S. held the second-largest position in the global mining production. According to World Mining Congress, the U.S. held a share of 11.5% of the global mining production in 2016. In addition to this, According to World Mining Congress, in 2016, the North America region produced 2.4 billion metric tons mineral raw material up from 2.3 billion metric ton in 2010. Hence, this increasing production of mining have raised demand for earth moving equipment in this region. Furthermore, increasing construction industry in North America region has also accelerated demand for earth moving equipment market in this region. For instance, according to Coherent Market Insights’ analysis, in 2016 the spending for new residential construction was US$ 464 billion and is expected to reach US$ 571 billion by 2021. Hence, this increasing construction spending in the U.S. is expected to aid in growth of the market over the forecast period.

Ceramic tiles are increasing being adopted by the residential sector. These tiles are usually made of sand, clay, or o...

The global phenol formaldehyde adhesives and laminates market size is expected to witness potential gains in the futur...

The global epoxy putty & construction chemicals market size is expected to witness potential gains in the future a...

The global non-silicates market size is expected to witness potential gains in the future, and register a significant ...

Cement is one of the most crucial materials in modern construction industry. It works as the binding material, which k...