Epoxy curing agents are used to obtain optimum performance characteristics of epoxy resins by crosslinking with them. The selection of curing agents is totally dependent upon the process and end user requirements. Handling characteristics such as viscosity, pot life, gel time, and physical & chemical properties along with environmental limitations play a crucial role in the manufacturing of epoxy curing agents. Epoxy curing agents are mainly classified as aliphatic amines, polyamides, aromatic amines, anhydride, catalytic, polysulfide, and mercaptans. Each of them have advantages and dis-advantages over the other and for specific requirements. The global epoxy curing market has witnessed substantial growth due to its extensive applications in construction, coatings, adhesives, and electronics among others. High growth in construction activities in both, residential and no-residential sectors is increasing demand for high performance epoxy-based resins. Increasing research and development activities to develop high performance curing agents is e expected to fuel growth of this market over the forecast period. However, stringent government regulations imposed on the use of volatile organic solvents, pose as a restraint for market growth. The impact of this restraint is expected to minimize due to technological advancement in epoxy curing manufacturing processes, helping the market cope with this challenge.

Among product type, low temperature cure segment holds the largest revenue and volume share in the global epoxy curing agents market and is expected to lead the market by witnessing a CAGR of 5.4% over the forecast period. Increasing demand for low temperature cure epoxy curing agents in paints and coatings application is projected to positively impact the growth of this segment in the near future.

Among application, construction segment accounted for the highest share both, in terms of revenue and volume, in 2016. Increasing construction activities due to the increasing demand for residential and non-residential infrastructure across the world is projected to maintain dominance of this segment over the forecast period.

Asia Pacific accounted for highest revenue share and was valued at US$ 579.39 million in the global epoxy curing agents market in 2016. The region is expected to sustain its dominance throughout the forecast period due to increasing government and private investment on infrastructure development. For instance, in 2015, the Indian Ministry of Road Transport, Highways and Shipping announced a target of US$ 376.53 billion investment in infrastructure sector by 2018. Asia Pacific is projected to be the fastest growing region in the global epoxy curing agents market and is projected to witnessing a CAGR of 6.2% over the forecast period. 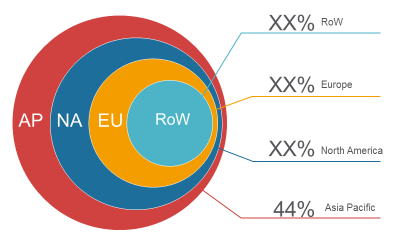 Asia Pacific held highest revenue share of 44% in the global epoxy curing agents market, in 2016 and the region is projected to maintain its dominance throughout the forecast period. North America accounted for second largest market in 2016.

Epoxy curing agents have wide range of applications in industrial coatings, civil engineering & construction, automotive and metal-to-metal adhesives, composites, and electronic potting, among others. Various types of curing agents such as aliphatic, cycloaliphatic, amido-amine, and polyamide have different molecular structure, basicity, and belong to different functional groups. These properties allow epoxy curing agents to control the curing reactions and control the properties of cured thermosets. Companies are launching low-emission and waterborne curing agent products to meet the increasing demand for environmental friendly formulations. Companies such as Huntsman and Dow Chemicals are focusing on developing environmentally responsible formulations of epoxy curing agent products.

The increasing demand for high performance epoxy-based resin formulations for various applications such as paints & coatings, composites, and electronic applications is fueling growth of the epoxy curing agents market. Asia Pacific is expected to hold a dominant position in the epoxy curing agents market, owing to industrialization in the chemicals, aerospace, automobiles, and oil & gas sectors in the region. , Polyamide segment holds a dominant position in the market due to its major applications in paints & coatings industry. Advancements in technology for the production and use of epoxy curing agents have led to the substantial market growth in North America. For instance, Huntsman developed a new amine technology to increase productivity for larger offshore rotor blades and to improve infusion process for liquid epoxy.

Botanical extracts are extracted from plant and are rich in amino acids, vitamins, and minerals. These add refreshing,...

Special effect masterbatches are concentrated mixtures obtained by mixing of colors and additives in a polymer carrier...

Metallocene linear low density polyethylene (Metallocene LLDP) is a thermoplastic material, which is manufactured by u...

Recycled plastics is produced from scrap or waste plastic and is further utilized in manufacturing various products su...

Polymeric materials derived from biomass such as agriculture feedstock (corn, potatoes, etc.) and other organic waste ...