The market is projected to reach US$ 33.9 billion by the end of 2027, at a CAGR of 4.9% over the forecast period, attributing to increasing demand for meat and packaged food.

Frozen meat offers various advantages such as longer shelf life, food safety, and others, and is expected to drive growth of the frozen meat market over the forecast period. Moreover, frozen meat products help reduce food waste, are easy to cook. The freezing action inhibits growth of potentially harmful bacteria, which are a cause of food poisoning. Due to rapid freezing, the texture, taste, and freshness of food items is maintained. If there is little water present, it transforms itself into ice crystals, thus locking freshness and nutritional value. These factors are expected to increase the demand for frozen meat over the forecast period.

Distribution channels of frozen meat include supermarkets, hypermarkets, online, convenience stores, and others. Other distribution channels include specialty stores and departmental stores. Supermarkets segment is expected to grow at a faster pace during the forecast period. Increasing urbanization in emerging economies of Asia Pacific and Latin America has led to increased consumption of packaged food products. For instance, according to the India Brand Equity Foundation (IBEF), the number of supermarkets in India grew from 500 stores in 2006 to 8,500 stores by 2016.

High tariffs imposed on imported meat products is projected to hamper the market growth. For instance, in 2017, the Japan Ministry of Finance announced raised tariffs on beef imports from the U.S. The raised tariffs were announced to protect the domestic meat producers who were facing significant losses due to low-priced meat imports. However, technological advancements in the frozen meat industry are expected to increase demand for frozen meat in the near future. 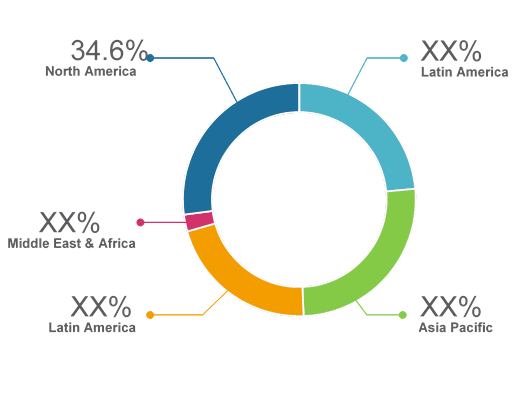 North America is the fastest growing region and accounted for the largest market share of around 34.6% in 2018, owing to increasing demand for protein rich food and advancement of technology in the food industry. Hectic lifestyle and changing consumer dietary patterns are also driving the market growth.

Furthermore, companies are focusing on product development in order to expand their product portfolio. For instance, in 2016, Kerry Group Plc. launched a range of American frozen dishes under the brand name ‘The Shack’ in the U.K. The products include beef burrito, chicken fajita, and macaroni and cheese. The products will be sold exclusively through U.K. frozen food retailer Iceland.

Among meat type, poultry segment held significant market share of 33.4% in the global frozen meat market in 2018. Frozen poultry meat has an extensive shelf life compared to conventional raw meat, which in turn is expected to bolster the demand for frozen meat in the near future.

Frozen meat products help in reducing food waste while providing fresh taste. Frozen meat products are easy to cook, handy, and save time. In contrary to processed foods, frozen meat products do not contain any harmful preservatives. Key players in the market are adopting various business strategies such as mergers and acquisitions to expand their global footprint. For instance, in September 2018, Cargill, Inc. acquired Konspol Holding Sp. zo.o., a food company in Poland that offers a range of products in the frozen, cold cut, and chilled convenience categories. The acquisition will help Cargill to enter the Poland market and expand its global presence in meat market.

Among distribution channel, online segment is expected to witness significant growth in the market over the forecast period. Increasing internet penetration in emerging economies such as India and China, ease of comparison of prices, review of products, and ease of delivery at home through e-commerce sites are the major factors driving growth of the segment in the market. For instance, according to Associated Chambers of Commerce and Industry in India (ASSOCHAM), the online retail market in India was valued at US$ 38.5 billion in 2017 and is expected to reach US$ 50 billion by 2025.

Asia Pacific is expected to be the fastest growing region in the market over the forecast period. Increasing meat consumption due to significant demand for protein rich food is driving growth of the frozen meat products market in this region. Key players are introducing new products to cater to increasing demand for frozen meat products. For instance, in February 2018, Chevon Agrotech, a frozen food company, launched goat meat based ready-to-eat products brand KUZO.

Frozen food is preserved under low temperature in order to...

Food safety products and testing refers to the testing of ...