The global agricultural testing market size was valued at USD 5,426.30 million in 2021 and is anticipated to witness a compound annual growth rate (CAGR) of 5.70% from 2022 to 2030. The market of agricultural testing is witnessing strong growth on the account of growing concern over food safety and sustainable practices. Increasing population and rapid urbanization is raising awareness regarding food safety. Moreover, contamination of agricultural resources such as water and land is further creating demand for testing services to evaluate pollutants present in the agricultural produces. All these factors are projected accelerate market growth.

Asia Pacific is also expected to witness fastest growth over the forecast period and this is attributed to increasing government initiatives to expand laboratory for seed testing. For instance, in India the Ministry of Agriculture in 2018, increased 583 seed testing labs in major towns and 6,600 labs at the block level in rural areas in the country. The agricultural testing market in India was valued at USD 256.6 million in 2020 and is projected to reach USD 387.0 million by 2026, recording a CAGR of 7.3% during the forecast period. 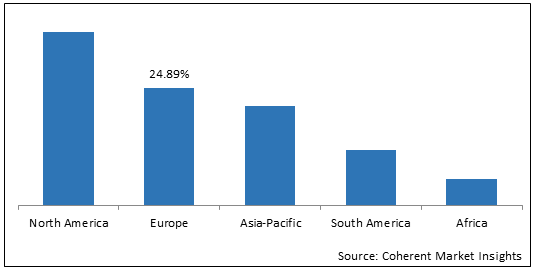 Growing concern over food safety and sustainable practices are driving growth of the agricultural testing market. The world is witnessing unparalleled challenges such as resource depletion, drought, water scarcity, land degradation, pollution and loss of biodiversity, and climate change. All these factors are affecting the sustainability of food and agriculture systems and the livelihoods of smallholders and farmers. In order to combat these challenges, proper testing is important to improve the human lives.

Increasing regulations and framework related to agricultural and environmental safety is again fostering market growth. The Federal Seed Act (FSA), 2020, outlines seed requirements, such as germination, seed purity, details of treated seeds, etc., for interstate shipments of agricultural and vegetable seeds. In the United States, regulations related to pesticide registration, production, and distribution under the authority of the Federal Insecticide, Fungicide and Rodenticide Act (FIFRA) is governed by the Environmental Protection Agency (EPA).

The growing number of regulations related to protection of soil in the European region is projected to support the soil testing market, especially in the United Kingdom. This is expected to provide lucrative growth opportunities. The country has made soil testing mandatory every five years.

Key players are focusing on introducing new technology in agricultural testing. This is projected to serve major growth opportunities for the key players. For instance, in January 2022, Bayer announced the launch of Testing4Ag, a new programme that allows research scientists from around the world to submit novel chemistries to Bayer for testing in hopes of identifying potential new modes of action to control fungal diseases, insect pests, or weeds.

There is a growing trend of small–scale laboratories to perform soil testing activities on agricultural land around the world. Moreover, these activities are projected to be commercialized over the course of time, and thus these laboratories. Also, it is expected that small-scale players are projected to emerge in the market in the coming years which will increase competition among these small ventures as well as the established soil testing companies. Mainly, users/farmers will get benefit from this as they would have a wide range of choices of companies and prices to choose from.

Rise in the trend of following electrophoretic and serological methods in seed testing especially in North America region will further favor the market growth.

High cost and time involved in the testing is expected to restrict the market growth. For instance, as per a protocol by Wayne State University, for every 242 square feet, a soil sample needs to be collected. A Penn State’s lab would charge approximately USD 27 per sample to be tested for lead contamination, which would cost the farmer USD 837 per lot. For one acre (5.81 lots), it would cost a farmer around USD 4,860 for only lead testing.

Lack of awareness regarding the agricultural testing among farmers is again anticipated to hinder the market growth. For instance, as a part of a research conducted by the Central European University of Agronomy and Soil Sciences, in 2018, a random sampling of 500 farmers was done. The results revealed that only about 17.4% of the respondents belonged to a very high category with respect to knowledge of soil testing and use of soil health cards for advance farming. This shows that the majority of farmers lack proper knowledge and awareness, which impacts the overall soil testing market in Europe. 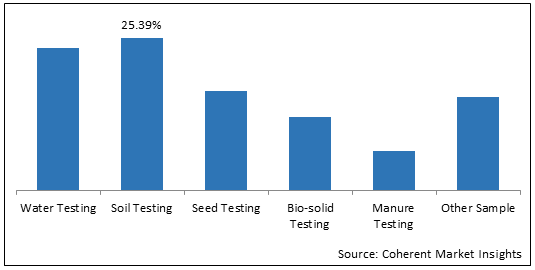 The global agricultural testing market report is segmented into sample and geography.

Based on sample, the market is segmented into Water Testing, Soil Testing, Seed Testing, Biosolids Testing, Manure Testing, and Other Samples. Out of which, Water Testing is expected to dominate the global market over the forecast period and this is attributed to the growing demand from food  and  beverage, pharmaceutical,  agricultural,  medical,  energy  and  power,  electronics  and  semi- conductor, and wastewater treatment industries.  According to the Coherent Market Insights analysis, the water testing market was valued at USD 1,146.2 million in 2020, and it is projected to reach USD 1,762 million by 2026, registering a CAGR of 6.5% during the forecast period.

Soil Testing segment is also expected to witness significant growth in the near future and this is owing to the growing importance of soil testing for optimizing crop production, to protect the environment from contamination by runoff and leaching of excess fertilizers and to improve the nutritional balance of the growing media.

Agricultural testing involves the analysis of soil and water to assess their suitability for crops and other uses. It measures the level of various elements such as potassium, magnesium, copper, manganese, zinc, and salts. It can help identify contaminants that are present in soils and guide producers in selecting appropriate agronomic practices. The testing can also reveal the pH and salinity of a soil. A good soil test can give farmers the information they need to improve their crops.

On the other hand, high cost associated and time involved is expected to restrict the market growth.

Growing concern over food safety and sustainable practices are fuelling the growth of the market.

The Soil Testing segment is the leading component segment in the market.

High cost and time involved is the major factors restraining growth of the market.