Asia Pacific Newborn Screening Market to Surpass US$ 495.1 Million by 2026

Infants are most vulnerable to diseases such as polio, epilepsy, encephaliphitis, asthma, COPD and other respiratory disease, diarrhea, leukemia, anemia, and other rare diseases that results in substantial economic burden.

Newborn screening describes various tests that are performed during first few hours or days of an infant’s life. These tests have the potential of preventing severe health problems and prevents from death. According to American Academy of Pediatrics: 2018, newborn screening and diagnosis are important to ensure that all babies who are deaf or hard of hearing are identified as soon as possible. According to same source, 1 to 3 out of every 1,000 babies born in the U.S. have hearing level outside the typical range. When these babies receive early intervention services, it makes a big difference in their communication and language development in the future.

Increasing engagement programs by various government healthcare regulatory bodies for newborn screening and its deployment for wider population base are expected to drive growth of the market during the forecast period. For instance, in June 2014, PerkinElmer, a company engaged in the diagnostics, life science research, food, environmental and industrial testing area, entered into an exclusive collaboration with China's National Health and Family Planning Commission (NHFPC) to implement a three-year training program for newborn screening.

The National Maternal & Children Health Surveillance Office (NMCHSO) is working with PerkinElmer, to increase availability and adoption of newborn screening in China, particularly via expansion in more rural areas.

However, lack of improvement in healthcare infrastructure and trained professionals is a major factor hindering growth of the Asia Pacific newborn screening market. Newborn screening is still not widely adopted in Asia Pacific region and requires more development and awareness. Countries in Asia Pacific region have high population and less number of trained professionals. High population with low and middle-income level and poor quality health services are hindering growth of the market.

China holds the major share due to innovative and new initiatives by government for implementing various newborn screening programs. Currently Congenital Hypothyroidism (CH) and Phenylketonuria (PKU) and hearing loss are included as national wide screening program in China, which is also mandatory for all newborn.

In addition to this, more than 150 Newborn Screening (NBS) labs in China offer screening program for Congenital Adrenal Hyperplasia (CAH) and Glucose-6-Phosphate Dehydrogenase Deficiency (G-6-PDD), and about 11 million babies had been screened for CAH and G6PD in 2017.

India is expected to witness significant growth in the Asia Pacific newborn screening market, owing to high birth rate in this region. For instance, according to the World Health Organization (WHO) 2016, India’s total population was 1,324,171,000, which is second-largest in Asian countries after China. Newborn birth rate in India is around 34 births per second and 2,062 births per hour. 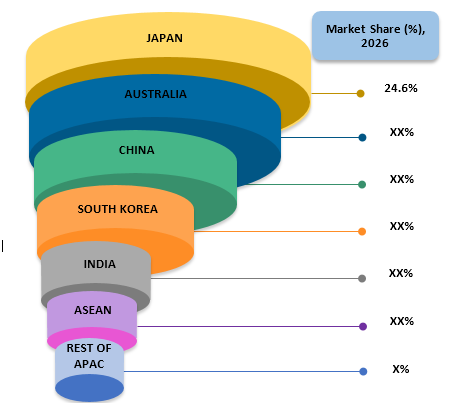 Newborn screening has evolved from a simple urine or blood screening test to a more comprehensive and complex screening system capable of detecting over 50 different conditions. Newborn screening tests measure a number of markers in infant’s blood that can be either decreased or increased if an infant has certain diseases. Currently, conditions such as cystic fibrosis (CF), congenital hypothyroidism, phenylketonuria (PKU), and around 22 other metabolic conditions that affect protein or fat metabolism can be diagnosed through newborn screening tests.

Demand for newborn screening is increasing in order to tackle various infectious diseases such as measles, mumps, polio, tuberculosis, rubella, influenza, whooping cough, chickenpox, malaria, and streptococcal pharyngitis. According to the World Health Organization (WHO) 2018, globally, around 86% of infants are vaccinated against 26 diseases, however, 19.5 million infants are unvaccinated resulting in death of 2-3 million children every year.

Screening of newborn is rapidly gaining traction in Asia Pacific region, owing to highest birth rate in the region, which is almost half of the global population. Therefore, countries in Asia Pacific are focusing on arranging various workshops to discuss and find solutions for increasing incidence of neonatal diseases. For instance, from March 30–April 1, 2008, PerkinElmer, Inc. arranged a workshop on consolidating newborn screening efforts in Cebu, Philippines, in Asia Pacific region. From June 4-5 in 2010, PerkinElmer, Inc. arranged another workshop in Manila, Philippines, which included workshop participants such as service providers, policy-makers, consumer advocates, and researchers from 11 different countries.

Laboratory gas generator is a system that is used in various industries such as pharmaceutical, chemical industry for ...

Bioprocess is defined as the technique that helps in the production of biological material such as genetically enginee...