Barite Market to Surpass US$ 2.30 Billion by 2025, Fuelled by High Demand In Oil & Gas Industry as Weighing Agent to Increase Fluid Density

Baryte or barite is a white or colorless mineral and is a major source of barium. The barite group consists of anhydrite, baryte, celestine, and anglestite. Barite can be commonly found in the lead-zinc veins in limestones and are deposited through wide range of processes including, evaporation, hydrothermal, and biogenic, among others. It is an industrial mineral that contains 34.3% sulfate and 65.7% barium oxide when in pure form. The properties such as low solubility, high density, chemical inertness, and low cost makes barite an essential industrial mineral, with high demand in the oil and gas, paint and coatings, and pharmaceutical industries.

In terms of revenue, Asia Pacific is the fastest growing market for barite, witnessing a CAGR of 6.49% over the forecast period. The rapidly growing oil and gas industry in the emerging economies of the region such as India and China, is the major driving factor for market growth. Growing population coupled with increasing disposable income among the populace in the region has augmented demand for energy in the region. As per data released by the U.S. Energy Information Administration (EIA), total liquid fuel consumption in Asia Pacific is estimated to reach 33.3 million barrels per day (bpd) in 2017, with China accounting for 80% of the consumption in the region. Furthermore, the recent discovery of barite deposits in the Krishna-Godavari basin (KGD6) India, has brought in investments from various companies, with Reliance announcing an investment of US$ 6 billion in 2015.

North America is the largest market for barite and is expected to retain its dominance through 2025. North America barite market was valued at US$ 0.56 billion in 2016 and is expected to exhibit a CAGR of 6.21% over the forecast period. The shale oil revolution in the region has surged the growth in the exploration and development activities, which in turn has led to major capacity addition in the region, subsequently fueling demand for barite as weighting agent in the oil and gas industry. According to the U.S Energy information Administration (EIA), around 15.8 trillion cubic feet of natural gas was produced from shale reserves in the U.S. in 2016.

Europe is the second largest market for barite, projected to witness a CAGR of 5.24% during the forecast period. The growth in the exploration and production activities, especially in the North Sea has surged the barite market in the region. Moreover, the dominant automobile and consumer goods industry in the region has increased the demand for paint and coating in the region, which in turn is significantly driving the barite market due to its major use in pigments in paint and coating industry. 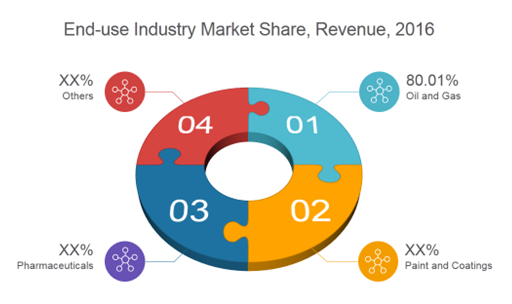 Barite (BaSO4) is a mineral, consist of barium sulfate. Barite, Celestine, anglesite, and anhydrite are contained in the barite group. China, India, U.S., and Morocco are the major countries where commercial deposits of barite are currently found. There are near about 20 countries worldwide where barite is mined, among which China is the largest producer. The occurrence of Barite generally found in the forms of large deposits. It is found lead-zinc veins in hot spring deposits and with hematite ores. Mainly barite is used as thixotropic mud to seal oil wells in drilling applications.

The major diver propelling the growth of this market include rapidly developing oil & gas industry. According to American Chemistry Council (ACC), due to the availability of cheap and abundant ethane and shale gas, there is a boom in the chemical industry in U.S with influx of 294 new projects by the end 2017. Further, with rise in demand for energy, there is increased demand for oil & gas, which in turn has shown a positive effect on the barite market

What are the growth estimates for barite market till 2025?

The global barite market is estimated to surpass US$ 2.30 Billion by 2025.

Which are the prominent barite market players across the globe?

Which segment based on end-use industry, accounted for the highest demand in the barite market?

What are the key factors driving growth of the barite market?

Growing demand for oil and gas across the globe is one of the major factors that is expected to propel growth of the market over the forecast period.

What is the Compound Annual Growth Rate (CAGR) of the barite market for next 8 years?

The global barite market is estimated to exhibit a CAGR of 5.83% over the forecast period.

Which region is dominating the barite market growth?

Among regions, North America is estimated to hold dominant position in the market over the forecast period.

Aluminum is a silver-white element and belongs to group 13 of the periodic table. It is durable, light, and ...

Hot melt adhesive is an adhesive that is used across packaging, automotive, nonwovens, product assembly, tap...

Epoxy resin is a polymer produced by copolymerization of an epoxide with a compound that consists of two hyd...