Bone Tumor Ablation Devices Market to surpass US$ 111.1 Million by 2027

Bone tumors develop, when cells within a bone divide uncontrollably, forming a lump or mass of abnormal tissue. Most bone tumors are benign (not cancerous). Benign tumors are usually not life-threatening and in most cases, these tumors do not spread to other parts of the body. Depending upon the type of tumor, treatment options are wide-ranging, from clinical observation to surgery to remove the tumor. Bone health significantly deteriorates with age, and this might lead to a large number of accidents and resultant fractures. For instance, the statistics released by the National Osteoporosis Foundation in 2014 revealed that 10.2 million adults had osteoporosis and another 43.4 million had low bone mass, which indicates that over one-half of the total U.S. adult population were affected by bone disorders in 2013.

Several ablation techniques are available to treat bone tumors. They offer multiple advantages such as these techniques are minimally invasive, allow targeted tumor destruction, and have low rate of complications. To date, the most widely utilized techniques include cryosurgery and Radiofrequency Thermal Ablation (RFTA).

Bone tumor ablation surgery is required in majority of bone tumor patients for cure or for management of painful bone metastases. During this COVID-19 pandemic, surgery, chemotherapy, and immunotherapy of cancer patients is often postponed or even cancelled, whereas during this time, bone tumor ablation surgery is becoming a preferred treatment option, as ablation surgery is minimally invasive, requires lesser time, and is cost-effective. According to the data published in NCBI in 2014, bone tumor ablation of painful metastatic bone disease is considered safe and has been shown to reduce pain while improving quality of life for cancer patients. Delivering care for patients with bone cancer during this crisis is challenging given the competing risks of death from cancer versus death or serious complications from SARS-CoV-2 and the likely higher risk of COVID-19 in immune compromised hosts. 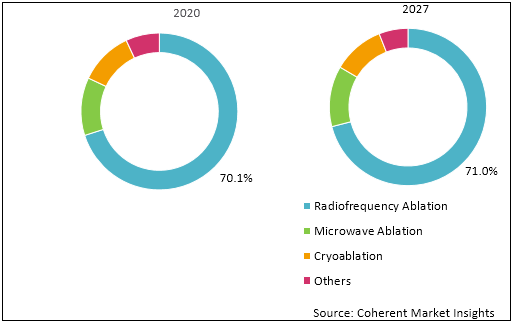 Key players in the market are involved in developing novel bone tumor ablation devices and launching them in the market. The launch of such advanced systems in the market is expected to significantly drive the market growth and create conductive environment for bone tumor ablation devices market over the forecast period. For instance, Medtronic Plc. launched OsteoCool RF Ablation System to treat spine metastases in January 2016. It offers simultaneous, dual-probe capabilities for treating painful bone tumors. Moreover, in 2017, Medtronic plc, launched OsteoCool RF Ablation system in Canada for the indication of bone metastases. Furthermore, in 2015, DFINE, Inc. launched Long SpineSTAR ablation instrument for the palliative treatment of metastatic spine tumors. The SpineSTAR ablation instrument is the only steerable and navigational radiofrequency device in the market.

Furthermore, increasing prevalence of bone cancer is expected to create lucrative opportunities for growth of the bone tumor ablation devices market. For instance, according to the American Cancer Society (ACS), around 3,300 new cases of bone cancer were diagnosed in 2016, resulting in around 1,490 deaths in the same year in the U.S. Moreover, the ACS sates that in adults, over 40% of primary bone cancers are chondrosarcomas.

North America is expected to be the most lucrative region in the bone tumor ablation devices market over the forecast period. The rising incidence of osteosarcoma is expected to drive the market growth in the North America region. For instance, Osteosarcoma is the most common type of cancer affecting bones, and it mostly occurs in children and young adults. Based on cells, osteosarcoma is classified as high, intermediate, and low-grade. According to the American Cancer Society, about 800 to 900 new cases of osteosarcoma are diagnosed in the U.S. every year, with about half of these occurs in children and teenagers. It is further expected to drive growth of the bone tumor ablation devices market in this region.

The rising adoption of minimally invasive treatment therapies due technological innovation is expected to drive growth of bone tumor ablation devices in Asia Pacific. The ongoing conferences about ablation technology use in this region are expected to create awareness about ablation technology among healthcare providers. For instance, in 2019, ACTA 2019, a (Asian Conference of Tumor Ablation) conference on ablation technology was held in Chang Gung Memorial Hospital, at Taiwan. The conference focused on principles and technical tips related to radiofrequency ablation (RFA), microwave ablation (MW), cryoablation, irreversible electroporation (IRE), and various guiding techniques including imaging fusion were introduced in the event. 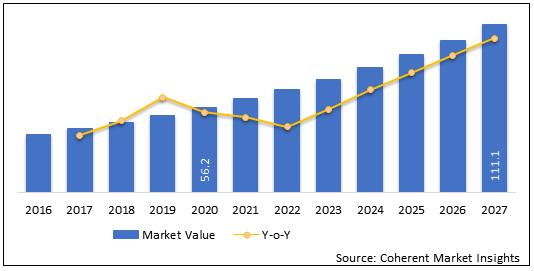 Tumor ablation is a minimally invasive procedure to remove the tumor cells or tissue from the body. Tumor ablation devices consist of a catheter, which is introduced into the tumor under imaging guidance. The use of microwave ablation magnetic image-guiding systems has provided an effective adjunct in laparoscopic ablation, provided better support to surgeons, and increased patient outcomes. Key players are also focused on launching of ablation devices, which is expected to drive the market growth over the forecast period. For instance, in January 2016, Medtronic Plc. launched the OsteoCool radiofrequency ablation system in the U.S. OsteoCool RF Ablation system is a cooled radiofrequency (RF) ablation technology. It offers simultaneous, dual-probe capabilities for treating painful bone tumors.

Osteoporosis is a common cause for bone fractures and its prevalence gradually increases with age. For instance, according to the National Center for Biotechnology Information, osteoporosis occurs in 10% men and 13% in women, who are aged 60 years or above. According to the National Osteoporosis Foundation data of 2014, a total of 54 million U.S. adults aged 50 and older were affected by osteoporosis and low bone mass in 2013. It further states that the number of bone fractures will increase by 2 to 4 times by 2020 and 41 million women will suffer from osteoporosis or osteoarthritis. This is mainly attributed to significant rise in geriatric population.

The bone tumor ablation devices market is expected to exhibit a CAGR of 10.2% during the forecast period (2020-2027).

What is the estimated market size of the bone tumor ablation devices market in 2020?

The value of bone tumor ablation devices market is estimated to be valued at US$ 56.2 million in 2020.

Which are the prominent players operating in the bone tumor ablation devices market across the globe?

What are the growth estimates for the bone tumor ablation devices market till 2027?

The bone tumor ablation devices market is expected to be valued at US$ 111.1 million in 2027.

Which is the major region in the bone tumor ablation devices market?

North America is the major region in the bone tumor ablation devices market.

What are the key factors driving growth of the bone tumor ablation devices market?

Visual impairment can be any kind of vision loss, whether it is the condition in which someone cannot see at...

Orthopedics aim at the treatment of various orthopedic disorders in the musculoskeletal systems, which inclu...

Neurovascular devices are required for surgeries for stroke and brain aneurysms. Factors such as approval an...