Press Release: Casein and Caseinate Market to reach around US$ 3.9 billion by 2027

Casein and Caseinate Market to reach around US$ 3.9 billion by 2027

Casein and caseinates are essential proteins that are mainly found in mammalian milk and are widely used in the preparation of various functional foods. Also, casein and caseinates are used in clinical studies as they have important nutrients and high solubility and enzymatic digestion. Moreover, casein is fast-drying, water-soluble and has adhesive properties which make them ideal for various an industrial application such as paper and cardboard coating, plastics, paints, adhesives, leather tanning, etc. They have extended shelf-life and can last for months which makes their transportation from one place to another easy and convenient.

Increasing industrial use of caseins and caseinate such as plastics, chemicals, and synthetic fibers is augmenting market growth of caseins and caseinates over the forecast period. According to the Coherent Market Insights, Friesland Campina DMV has developed “Excellion EM7 High Viscosity”, a new type of caseinate using a new, patented production technique. This caseinate provides improvement in key product properties, along with cost reduction.

The increasing importance of protein in the diet is projected to augment the market growth of casein and caseinates. According to the Coherent Market Insights, per capita milk consumption in developing countries was 28 kg between 1964 and 1966, which increased to 44.6 kg between 1997 and 1999, and is expected to amount to 65.8 kg by 2030. This indicates the rising awareness about the benefits of protein intake among consumers.

Regionally, North America dominated the global casein and caseinate market in 2018, accounting for around 35% share in terms of value, followed by Europe and Asia-pacific, respectively

The growing demand for protein-enriched foods around the globe is projected to propel the market growth of caseins and caseinates. This is attributed to growing awareness regarding the benefits of protein such as promote weight loss and muscle growth. Caseins and caseinate are also increasingly being used in general nutrition, and due to its excellent ability to release amino acids slowly. According to the Coherent Market Insights analysis, U.S. based dairy company, Fairlife LLC, launched new high-protein milk with 50% more natural protein and calcium.

Rising demand for cheese around the globe is anticipated to accelerate the market growth of caseins and caseinates. According to the a report published by dairy food in April 2019, per capita consumption of American->

Expanding the food and beverage industry is a major factor projected to propel the market growth of caseins and caseinates. According to Cushman Wakefield, the Asia Pacific is the fastest-growing region in terms of consumer spending on Eating Out, with average annual growth of 9.8% during 2006-16, while average annual growth of 7.5% is forecast for the 2017-26 period. This factor is expected to foster the market growth of caseins and caseinates.

Increasing Demand For calcium Fortification In sports Beverages is expected to foster the market growth of caseins and caseinate. For instance, in September 2018, Epi Ingredients is set to launch Epiprot 60 UL, a milk protein concentrate containing 60% total native protein. It is produced directly from fresh milk using a unique ultra-low heat process, which allows for minimal denaturation and optimal functional and nutritional properties, and preserves the 80/20 casein/native whey protein ratio unadulterated. 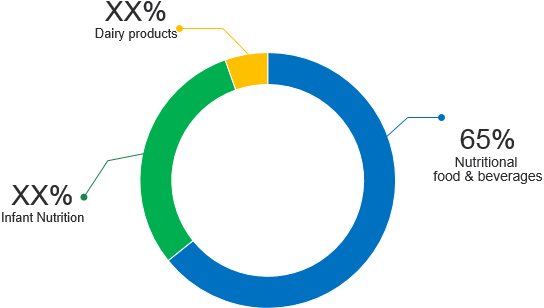 On the basis of application, in 2018, nutritional food & beverages accounted the largest market share of 65% in terms of value, followed by infant nutrition and dairy products respectively.

Casein is the milk protein, commonly found in mammalian milk. Casein is often used as an alternatives to other dairy-based proteins like whey protein. It is also known as “The other protein”. It is similar to other dairy-based proteins helping to build and repair tissues. They are low in calories and have essential content of amino acid. Casein products are widely used in food and beverages, protein supplements, sports nutrition products. Moreover, the casein and caseinates derivatives are also used for clinical purposes as they are a rich source of essential amino acid.

The global casein and caseinate market has witnessed significant growth in recent past years, owing to the growing awareness regarding health and fitness. This scenario is expected to fuel the demand for protein supplements and other protein products in forecast period. On the basis of applications, casein and caseinate finds its application in different sectors such as food & beverages industry, sports supplements, dairy products and infant nutrition. Food & beverages industry is expected to foster the market growth, owing to the rise in health awareness and introduction of new protein- enriched food products.