Custom LASIK Surgery Market to Surpass US$ 3.5 Billion by 2024

LASIK surgery is a highly effective method to correct vision and is especially useful in treatment of various refractive disorders such as myopia, hyperopia, and astigmatism. In the U.S. alone, over 34 million patients are suffering from myopia according to the American Academy of Ophthalmology 2016 estimates. Moreover, around 150 million people in the U.S. wear corrective eyeglasses. Custom LASIK surgery market revenue is expected to witness upward trajectory growth, owing to increase in demand for effective therapeutic treatment for disorders related to the eyes.

Introduction of technologically advanced products and long-term partnership of leading players with regional hospitals are key trends observed in the custom LASIK surgery market. There are over 1,050 LASIK centers catering to around 650,000 patients annually in the U.S. Companies such as Abbott Medical Optics and Alcon offer wavefront guided LASIK products. Government institutes in developed regions are supporting custom LASIK surgery procedure. As a result of this, several programs such as BlueCross Blue Shield QualSight program have been launched to offer support to product development and subsidies on the LASIK surgery. 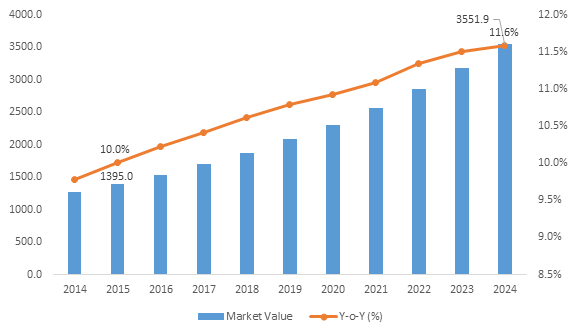 To have a snippet of the report, request Report Sample

Wavefront guided procedure segment is expected to dominate the custom LASIK surgery market procedure throughout the forecast period. The segment has been estimated to account for 45.8% share of the global custom LASIK surgery market revenue in 2016. This procedure involves detailed wavefront generated measurements of light traversing through the eyes. The procedure helps in offering personalized treatment to patients based on the unique anatomy of the patient’s eye. It is highly precise and more specific compared to conventional LASIK surgery.

Changing lifestyle patterns has in turn led to weakening immunity and has inadvertently increased susceptibility to various health problems worldwide. The global chronic disease incidence rate has increased significantly over the last two decades. Eye related diseases have also increased in the recent past. Over 150 million people in the U.S. wear corrective eye wear according to the American Academy of Ophthalmology 2016 statistics. Myopia is the widely prevalent eye-disorder and its prevalence rate is highest in Japan. High demand for effective treatment approach has led to increased demand for custom LASIK surgery procedure worldwide.

Microsclerotherapy is the method used for the treatment of telangiectasia, which is a condition where broken blood ves...

Hip implants are medical devices which are used to restore motility and relieve the pain related to arthritis or hip i...

Scalp cooling systems are helmet like structures containing a coolant, which is maintained at a low temperature rangin...