Liquid cooling segment is expected to exhibit the highest CAGR over the forecast period, owing to integration of advanced engineered coolants. The liquid cooling solutions provide cooling with low carbon footprint, which is propelling demand for direct liquid cooling solution in the data center liquid immersion cooling market. Furthermore, advantages offered by these system such as efficient cooling for high performance computing is also expected to drive market growth. 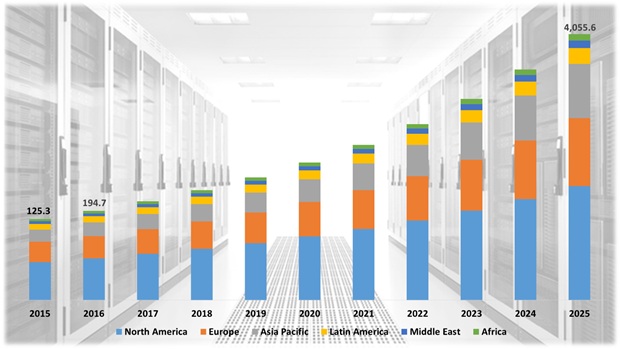 On the basis of geography, the data center liquid immersion cooling market is segmented into North America, Europe, Asia Pacific, Latin America, Middle East, and Africa. Data center liquid immersion cooling market in Asia Pacific is projected to exhibit the highest CAGR over the forecast period. Increasing adoption of cloud computing technology in emerging economies such as China, India, and Japan have accelerated demand for data centers in Asia Pacific, which is expected to favor market growth. According to Coherent Market Insights, an estimated cloud traffic in Asia Pacific region is projected to exhibit a CAGR of 30.7% over the forecast period (2016 - 2017).

North America region held the dominant position in the global market in 2017 and is projected to retain its dominance throughout the forecast period. The U.S. and Canada are the major growth engines in this region. High presence of hyper scale data centers in North America is a major driving factor for growth of this market. According to Coherent Market Insights, it is estimated that North America accounts for 48% of the total hyper scale data centers in 2016, globally. In addition to this, trend of early adoption of advanced technology is also expected to aid in growth of the data center liquid immersion cooling market.

Picocells, femtocell, and microcells are type of small cells. Microcell is a type of cell in mobile phone network, whi...

A hydraulically activated anchor is designed to hold the compression and tension by moving the tubing string in the we...