Disposable Gloves Market to Surpass US$ 11.56 Billion Threshold by 2026 Globally 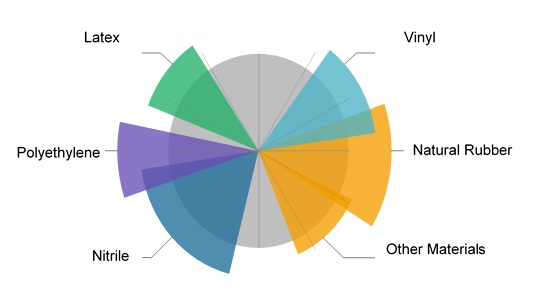 Key players in the manufacturing of disposable gloves market are engaged in the continuous development to introduce the gloves, which eliminates the potential transmission of bacteria and other hand/glove transmitted pathogens. For instance, in February 2018, Eagle Protect introduced a new formulation of nitrile gloves similar to the Teflon, which was resistant to bacteria and micro-organisms, thereby reducing the risk of potential cross-contamination in ready-to-eat-foods. In February 2013, Ferraris Piston Service Limited launched a black nitrile disposable gloves product range. These powder-free gloves are indicated to use in both mechanical and industrial environments.

Moreover, the growing burden of disposable gloves could limit the growth of disposable gloves market. The key manufacturers are developing disposable gloves, which could limit the adverse effect of gloves. They are also engaged in the several activities to recycle these disposable gloves. For instance, in December 2013, Globus Ltd lunched GREEN-DEX, the world’s first biodegradable nitrile disposable gloves. GREEN-DEX biodegrades in biologically-active landfills thereby providing an effective single-use hand protection solution and reducing the recycling cost. In June 2017, Cardinal Green Labs partnered with the E&K Scientific to launch the voluntary lab recycling program in the Stanford University lab. The program offers the free recycling bins to sort waste at the source. The program is estimated to keep 600 pounds of waste out of the landfills per bin per year. Furthermore, Cardinal Green Labs set up separate program to recycle the disposable gloves, which then collected and recycled by State, owned Environment Health & Safety Department.

North America accounted for high market share in the disposable gloves market, owing to well-established healthcare infrastructure and government policies, which ensure implementation of high standard of hygiene and best practices in the state. For instance, according to the U.S. Food and Drug Administration (FDA), the gloves used for handling foods are certified under Title 21 Code of Federal Regulations Part 177, which states that the components used for the manufacturing of the glove must comply with the FDA regulations and ensure that the gloves consist of substances, which is safe for use in food or food packaging. Asia Pacific is projected to witness the faster growing market for disposable gloves, owing to the developing healthcare infrastructure, increasing investments in healthcare, and to ensure excellence in the healthcare service and safety. For instance, China Food and Drug Administration (CFDA) recommended pharmaceutical companies in the China to pass the Good Manufacturing Practices (GMP) authentication, by ensuing personnel working in the production and manufacturing of pharmaceuticals facility are wearing disposable gloves. According to the China State Administration of Quality Supervision and China Food Association Statistics, as of July 2015 the domestic food processing and catering enterprises employed 580,000 people and the number of professionals and practitioners chef increased to 20 million. This in turn, is projected to create major demand for disposable gloves in the food industry in China in the near future. Increasing applications of disposable gloves in the various industry are expected to drive growth of the disposable gloves market over the forecast period.

Disposable gloves are part of standard precautions to prevent medical staff and healthcare professionals from the transmission of infection to patients. The transmission of pathogenic micro-organisms through disposable gloves recognized as an important vector for healthcare-associated infections. The disposable gloves protect the wearer from contacting with the pathogenic organisms, however, this personal protection can facilitates the wearer to become a carrier of the pathogen from one location to another. To limit the spread of pathogenic microorganisms, the combination of chlorhexidine and gentian violet as an antiseptic coating on the external surface of gloves can effectively prevents the potential mode of disease transmission. For instance, according to the National Center for Biotechnology Information (NCBI) in January 2014, the chlorhexidine and gentian violet-coated gloves can eliminate the transmission multidrug-resistant organisms. Furthermore, the coating did not adversely impact the integrity of the disposable gloves.

Increasing awareness regarding hygiene among healthcare service providers and food service industry is fueling growth of disposable gloves market. For instance, in December 2016, U.S. Food and Drug Administration (FDA), banned the powdered surgeon gloves, powdered patient examination gloves, and absorbable powder gloves, as they cause the substantial risk of illness or injury to the healthcare professionals and care givers. In November 2016, the Nestle India, Food and Drugs Administration, Goa and National Association of Street Food Vendors of India (NASVI), trained around 500 street vendors. The training of street vendors conducted by NASVI includes the effectiveness and application of disposable gloves in health, hygiene, food handling and proper waste disposal operations. According to the Malaysian Rubber Gloves Manufacturers Association (MARGMA): January 2017 findings, the demand for healthcare gloves are growing to increase by 8-10% in 2017, moreover the demand for nitrile gloves is expected to exceed over the latex gloves in coming years.