Press Release Engineering Plastics Market to Surpass US$ 127.9 Billion by 2025

Engineering Plastics Market to Surpass US$ 127.9 Billion by 2025

Among product type, Ultra-high-molecular-weight polyethylene (UHMWPE) segment accounted for the largest share of around 30.4% in the engineering plastics market in 2017. This is owing to a wide range of applications of UHMWPE in headlights, gear housing, electronic stability program control modules, door controllers or airbag connections, steering angle sensors, fiber optic cables, and others.

Asia Pacific is expected to be largest market in the global automotive industry over the forecast period, which in turn is expected to propel growth of the global engineering plastics market. According to the U.S. International Trade Administration (ITA), China was the largest vehicle producer between 2012 and 2014 and the average number of vehicles produced between 2012 and 2014 was 17.8 million. Moreover, vehicle production in China is expected to cross 27 million by 2020, thereby fuelling growth of the engineering plastics market in this region. 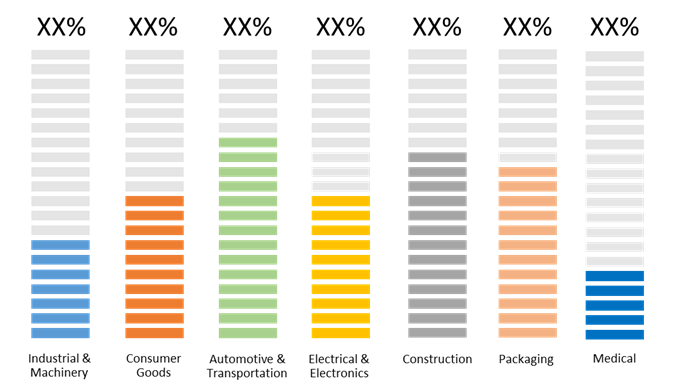 Polymethyl methacrylate (PMMA) is projected to be the second-largest segment in the engineering plastics market. PMMA can withstand extreme weather conditions and thus, is used in various applications such as light guide panels in the lighting units of LCD screens, indicator housings, outdoor and indoor lighting in the automotive industry, mobile phone lenses, street lamps, and others.

Asia Pacific held the dominant position in the global engineering plastics market in 2017, with a revenue of US$ 37.5 billion and is expected to retain its dominance throughout the forecast period. This is owing to significant growth of industries such as automotive, chemicals, packaging, electrical & electronics, and others in emerging economies such as China, India, Indonesia, Malaysia, and others. According to China Association of Automobile Manufacturers (CAAM) and Society of Indian Automobile Manufacturers (SIAM), sales of cars in China was 28.03 million and 3 million in India, in 2016 respectively.

Europe accounted for a significant share in the global engineering plastics market in 2017. This is owing to presence of major players in the region such as BASF SE, E. I. du Pont de Nemours and Company, Evonik Industries AG and others, and their initiatives to expand business in order to gain high revenue. For instance, in 2018, BASF SE announced plans to acquire Solvay SA’s global polyamide business. This is expected to expand BASF’s range of engineering plastics for consumer goods, construction, and transportation industries and is expected to strengthen its access to raw materials.

Increasing initiatives for reducing weight of vehicles and improvement in fuel efficiency backed by replacement of metal in automotive, electrical & electronics, and other industries are some of the key factors propelling growth of the engineering plastics market. Moreover, significant growth in various industries such as automotive, construction, electrical & electronics and others, in emerging economies has contributed to growth of the market.

However, fluctuating crude oil prices and environment regulation regarding CO2 emissions are expected to hamper growth of the global engineering plastics market. For instance, the World Bank Group estimates that recycling around 15 million tons of plastic wastes per year by 2030 will reduce CO2 emissions which would be equivalent to taking 15 million cars off the road.

Direct thermal film labels have a heat sensitive coating on their face stock, which enables these products to be image...

High Barrier Film and coatings are widely used to avoid entry of water, oxygen, light or any other elements in the pro...

Furniture foam offers both functional as well as aesthetic benefits in the manufacturing of residential & commerci...

Geopolymers are typically ceramic, inorganic materials that form non-crystalline networks. They can be used for medica...