Fipronil is a broad-spectrum insecticide that is available in the market in powder and liquid formulations. It is used for controlling beetles, ants, mole crickets, rootworms, termites, ticks, weevils, fleas, and other insects. The major application of fipronil includes seed treatment, pet care products, liquid termiticides, and agriculture products.

Fipronil market is expected to witness significant growth over the forecast period, owing to rising applications of fipronil in various end-use industries such as agriculture and pet care industry. However, availability of various less toxic alternatives of fipronil such as silica gel and boric acid is expected to hamper growth of the global fipronil market over the forecast period.

Moreover, increasing usage of fipronil in India crop protection industry is expected to provide various growth opportunities to market players for fipronil market expansion in India. For instance, according to the Food and Agriculture Organization of the United Nations, India ranked second in terms of global agricultural output and accounted for around 8.0% of the global share in 2017. Moreover, low per hectare productivity (3 MT per hectare versus world average of 4 MT), owing to lack of scientific methods of agriculture is expected to drive fipronil market growth over the forecast period. For instance, according to the India Brand Equity Foundation, the India crop protection industry was valued at US$ 4.0 billion in 2014 and it is expected to reach US$ 7.4 billion by the end of 2019, and is expected to exhibit a CAGR of 12.0% during 2015-2019. The expansion of the crop protection industry in India is expected to fuel demand for fipronil and other insecticides over the forecast period.

Among regions, Asia Pacific accounted for the largest revenue share of 55.6% in the global fipronil market in 2018. However, Latin America is expected to record fastest growth in terms of revenue and is expected to exhibit a CAGR of 5.0% during the forecast period (2019 to 2027), owing to growth of the agriculture sector in the region. For instance, according to report, ‘OECD?FAO Agricultural Outlook 2019?2028’, published by Organization for Economic Co-operation and Development (OECD) Publishing and Food and Agriculture Organization of the United Nations in 2019, Latin America and Caribbean (LAC) together accounted for 14% of the global crop production and 23% of the world’s exports of agricultural and fisheries commodities in 2018.

Furthermore, according to research article, ‘the dilemma of agricultural pollination in Brazil: Beekeeping growth and insecticide use’, published by Journal of PLoS ONE in 2018, Brazil is a world leader in agricultural production. Therefore, growth of agricultural sector in Latin America is expected to increase demand for efficient crop protection products, which is further expected to boost growth of the fipronil market in the region over the forecast period.

Based on application, seed treatment segment accounted for the largest revenue share accounting for 50.6% in 2018 in the global fipronil market. Seed treatment plays a vital role in protecting seedlings from insect-pests and diseases. Fipronil is used majorly for seed treatment in crops such as chickpea, maize, wheat, soybean, and groundnut. The growth of seed industry worldwide is expected to drive demand for fipronil over the forecast period. For instance, according to the Indian Council of Food and Agriculture report published on Seed Industry Scenario in September 2019, the global seeds market was valued at US$ 59.71 billion in 2018 and is expected to reach US$ 90.37 billion by the end of 2024, exhibiting a CAGR of 7.9% during the forecast period (2019 to 2024). 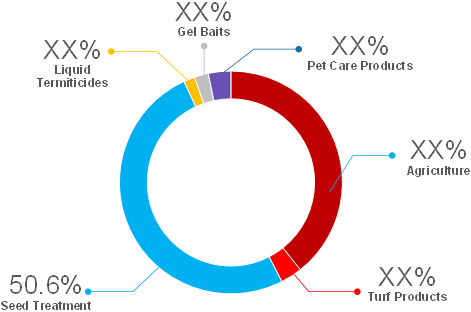 Major players operating in the fipronil market are focused on adopting various strategic initiatives such as mergers & acquisitions and new product development, in order to expand their product portfolio and global presence. For instance, in May 2018, Insecticides India Limited, launched four new products such as Encounter, Sofia, Aikido, and Hercules in India. These products were developed, in order to get better yields and thereby help the company in gaining a significant market share in India in the near future.

Fipronil is an insecticide that belongs to phenylpyrazole chemical family and is used for controlling beetles, ticks, mole crickets, rootworms, cockroaches, weevils, ants, and other insecticides. It find its applications in agriculture, turf products, seed treatment, pet care products, gel baits, and liquid termiticides. Increasing usage of fipronil in seed treatment and pet care products applications are expected to boost demand for fipronil market over the forecast period (2017 to 2027).

Based on application, fipronil market is segmented into agriculture, turf products, seed treatment, pet care products, gel baits, and liquid termiticides. In 2018, seed treatment segment accounted for largest revenue share of 50.5% in terms of volume, and is expected to witness significant growth over the forecast period, followed by agriculture and pet care products.

Among regions, in 2018, Asia Pacific held dominant position in the global fipronil market accounting for a market share of 57.0%, in terms of volume, owing to increasing usage of fipronil from various end-use industries such as food and construction coupled with the growth of these industries in the region.

Moreover, Middle East held market volume share of 1.8% in 2018 and is expected to increase its share to 2.1% by the end of 2027 in the global fipronil market. This is attributed to increasing awareness among people about efficient crop protection systems in the region. For instance, in the study titled, ‘Comparison of Fipronil-Impregnated Bait and Integrated Vector Management (IVM) in the Control of Zoonotic Cutaneous Leishmaniasis in an Endemic Focus of Fars Province, Southern Iran During 2016 to 2017’ published by Journal of Health Sciences and Surveillance System in January 2018, fipronil systemic insecticide and integrated vector management (IVM) were evaluated for their effects on reduction of leishmaniasis cases. In the study, evaluation of control and/or reduction of zoonotic cutaneous leishmaniasis (ZCL) cases were evaluated in the endemic foci of Fars province, southern Iran during 2016 to 2017. The study concluded that fipronil and IVM methods were advantageous in reducing the incidence rates of leishmaniasis in Iran.