Flavored and Functional Water Market, by Ingredients (Vitamins and Minerals, Botanical Extract, Amino Acids, and Others), By Distribution Chanel (Hypermarket, Supermarkets, Convenience Stores, Specialty Stores, Online Channels, and Others), and by Geography - Global Industry Insights, and Forecast till 2025

Press Release Global Flavored and Functional Water Market to Surpass US$ 70.32 Billion by 2025

Global Flavored and Functional Water Market to Surpass US$ 70.32 Billion by 2025

Flavored water can be described as purified or mineral water infused with different flavors, fruit extracts, and sweeteners. Functional water is fortified with vitamins, minerals, amino acids, herbal extracts such as licorice extracts and others, in order to make it healthier and for functional benefits such as aiding in improving immune system, lower cholesterol levels, improved digestion, and weight management. Increasing health consciousness as well as increasing consumer awareness of benefits of consumption of vitamins and minerals such as bolstering immune system is driving growth of the global flavored and functional water market.

Furthermore, growing demand for bottled and packaged water due to its advantages such as safety and convenience is fuelling growth of this market. According to the International Bottled Water Association, consumption of bottled water increased by 7.9% in 2015 as compared to previous year in the U.S.

Low calorie and unsweetened flavored and functional water is gaining traction, owing rise in health concerns such as obesity and diabetes. According to World Health Organization, in 2016, 39% women and 39% men were overweight globally. Furthermore, according to Organization for Economic Co-operation and Development (OECD), obesity update 2017, global obesity levels are expected to increase steadily by 2030, thereby increasing demand for low calorie and low sugar drinks. 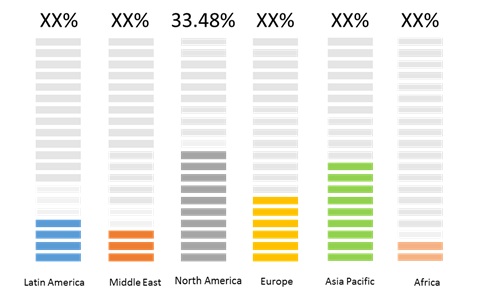 North America dominated the global flavored and functional water market and held revenue share of 33.48% in 2017. This is attributed to significant consumer demand for beverages. According to the Centers for Disease Control and Prevention, 49.3% of the U.S. adults consumed atleast one sugar sweetened beverage including flavored water, juices, and others in a day between 2011 and 2014. Furthermore, rise in health awareness is increasing demand for functional beverages in this region. According to the U.S. Department of Agriculture, the functional food market, which includes functional water was valued at US$ 3 billion in 2016 and is growing rapidly, due to increasing awareness of benefits of functional food and beverages.

Asia Pacific flavored and functional water market is growing rapidly, owing to increasing health awareness among consumer along with rising awareness of benefits of consumption of functional beverages such as improved immunity system among others. Manufacturers are launching innovative products, owing to increasing demand for flavored and functional water in Asia Pacific. For instance, in July 2017, NourishCo Beverages Ltd. launched Himalayan Orchard Pure flavored water and in October 2017, PepsiCo Inc., launched Aquafina Vitamin Splash in India.

Players operating in the global flavored and functional beverages market are adopting various strategies such as product development, collaborations and acquisitions to sustain in the competitive market. For instance, in February 2018, PepsiCo Inc. launched Bubbly, a brand of sparkling flavored water in different flavors such as apple, strawberry, and mango. In October 2017, The Coca-Cola Company acquired Topo Chico, a manufacturer of flavored water, for US$ 220 million. Also, in November 2016, Dr. Pepper Snapple (DPS) Group acquired Bai Brands, LLC, a beverage manufacturer, for US$ 1.7 billion.

By ingredients, vitamins and minerals are gaining traction owing to increasing consumer awareness about importance of vitamins and minerals for normal physiological function. By region, North America dominated the global flavored and functional water market with market share of 33.48% in 2017. The U.S. is the major contributor to growth of flavored and functional water in North America, owing to rising consumer awareness about health and growing consumption of bottled water. According to the International Bottled Water Association, per capita consumption of bottled water in 2014 was 129.1 liters, which increased to 138.2 liters in 2015 in the U.S. Key players are launching new products to cater to growing consumer demand. For instance, in February 2018, Nestlé Waters North America launched Regional Spring Water Brand in 10 different flavors.