Press Release: General Anesthesia Drugs Market is forecast to reach a value of US$ 6,240.4 Mn by 2028

Researchers are extensively focusing on research and development activities for anesthetic medications which can be attributed to drive the growth of general anesthesia market over the forecast period. For instance, in August 2021, researchers from the University of Michigan and Washington University School of Medicine in St. Louis conducted studies for determining the common anesthetic drugs that will offer improved clinical outcomes and best patient recovery experiences. The study included well-established anesthetic drugs such as inhaled anesthetic drugs and intravenous propofol.

In addition, companies operating in the market are receiving positive results for potential effect of compounds as general anesthesia which can further boost the market growth. For instance, in June 2021, PAION AG, a specialty pharmaceutical company, got positive results in the European Phase III trial for Remimazolam. It is an ultra-short-acting intravenous benzodiazepine sedative/anesthetic which is approved in the U.S., Europe and China for procedural sedation and as general anesthesia in South Korea and Japan. PAION AG is planning to submit an extension variation to the Marketing Authorization for remimazolam as general anesthesia by the end of 2021. Hence, such initiatives by the company will expand the market horizon in various regions, contributing in the market growth. 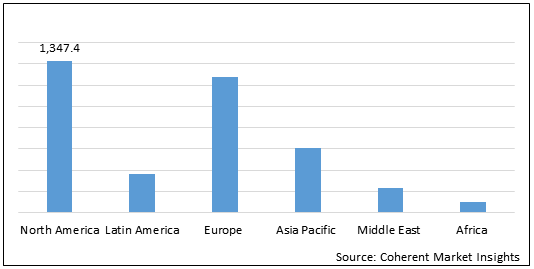 North America (Region) held dominant position in the global general anesthesia drugs market in 2020, accounting for 29.4% share in terms of volume, followed by Europe and Asia Pacific, respectively. The growth of the market is driven by increasing product approvals.

Increasing prevalence of CVD is expected to boost growth of the global general anesthesia drugs market over the forecast period. For instance, according to American Heart Association’s Heart Disease and Stroke Statistics 2018, around 92.1 million adults in the U.S. are suffering from some form of CVD or the after-effects of stroke.

Increasing funding to expand care for patients with disabilities is expected to offer lucrative growth opportunities for market players. For instance, in December 2019, The Rutgers School of Dental Medicine announced that it is expected to receive a US$ 250,000 funding for extra staffing and additional surgical resources for the treatment of special care patients who need general anesthesia.

Moreover, increasing R&D in general anesthesia is also expected to propel growth of the market. For instance, in April 2019, researchers from Duke University Medical Center reported that diverse drugs that induce general anesthesia activate a brain circuit that brings on sleep.

The market is witnessing increasing adoption of alternatives to general anesthesia. For instance, in November 2019, The U.S. Food and Drug Administration approved Tubes Under Local Anesthesia (Tula) System for the delivery of tympanostomy tubes. The approval offers patients an option for the treatment of recurrent ear infections that does not require general anesthesia. 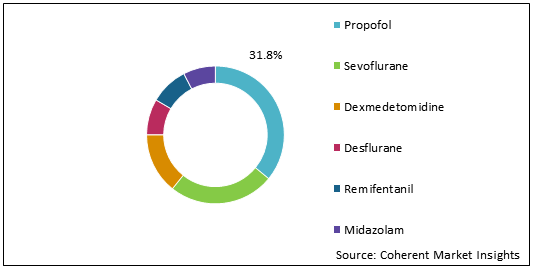 The propofol held dominant position in the market and accounted for 31.8% share in the global general anesthesia drugs market in 2020. The segment is expected to reach US$ 2,242.3 million in 2028. Growth of the segment is driven by high adoption of propofol owing to rapid return of consciousness, minimal residual effects on the central nervous system (CNS) and quick induction as general anesthesia.

Moreover, general anesthetic drugs can lead to complications such as allergic reactions. Moreover, the drugs may also be ineffective in some cases. Some fatal complications include allergic reactions, cardiovascular collapse, drug interactions, prolonged apnea, respiratory depression, jaundice, and anesthesia awareness. Such scenario is also expected to hamper the market growth.

Key players in the market are focused on raising funds to expand their product portfolio. For instance, in June 2019, PAION AG, a Germany-based pharmaceutical company specialized in anesthesia and sedation drugs announced that it will receive a funding of around US$ 20 million from The European Investment Bank.

Key players in the market are focused on adopting partnership strategies to expand their product portfolio. For instance, in June 2019, SunGen Pharma partnered with Athenex Pharmaceuticals for launching Bivalirudin for Injection in the near future.

Increasing funding for R&D in anesthetic drugs is expected to propel growth of the general anesthesia drugs market over the forecast period. For instance, in August 2021, researchers at Washington University School of Medicine in St. Louis and the University of Michigan received a US$ 33 million grant from the Patient-Centered Outcomes Research Institute to compare intravenous propofol to inhaled anesthetic drugs to determine which of the common anesthetic drugs offers better patient recovery experiences and improved clinical outcomes.

Product recall is expected to limit growth of the general anesthesia drugs market over the forecast period. For instance, in May 2021, Hospira announced to recall one lot each of the injectable hospital anesthetics bupivacaine HCL and lidocaine HCL due to mislabeling of product.

Charcot-Marie-Tooth disease (CMT) is one of the most commo...

Brain hemorrhage also known as a brain bleed or an intracr...

Organ transplantation is a procedure, wherein a healthy or...