Global Hydrophilic Coatings Market to Surpass US$ 17.66 Billion by 2025, Fuelled by Rising Adoption from the Healthcare Industry

The major factors propelling the growth of this market include the increasing adoption of hydrophilic coatings from end-use industries, such as healthcare, automotive, aerospace, and marine. Hydrophilic coatings exhibit water attracting properties and produces a hydrogen bond, which creates a lubricious and wettable coating that can be applied to a variety of surfaces and materials. Furthermore, the growing demand for lightweight materials in the automotive industry is expected to boost the growth of this market in near future. However, the high production cost of the hydrophilic coatings coupled with the lower shelf life of these products are the major factors hindering the growth of the market.

Asia Pacific is anticipated to be the fastest growing market for hydrophilic coatings, witnessing the highest CAGR of 8.83% during the forecast period (2017 - 2025). Major factors propelling the growth of this market include substantial growth in the income of middle-class population and the steadily growing geriatric population in the region, which is supporting the growth of medical sector, in turn increasing the demand for hydrophilic coatings in the medical devices. According to the United Nations Population Fund (UNFPA), the region is aging faster at an unprecedented rate and by 2050, one out of four people in the Asia Pacific is expected to be over 60 years. Furthermore, UNFPA anticipated that the geriatric population in the region is expected to triple between 2010 and 2050, amounting to around 1.3 billion people. The steadily growing healthcare sector in China is also propelling the growth of hydrophilic coatings market. According to Coherent Market Insights, the health care expenditure in China is expected to grow from US$ 355 billion in 2011 to approximately US$ 1 trillion by 2020. 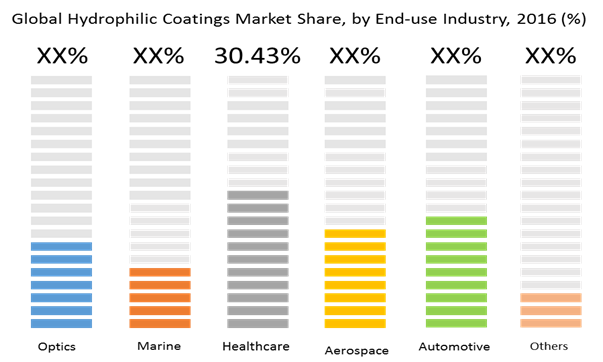 Based on end-use industry, healthcare segment emerged as the leading market in 2016 and is expected to retain market dominance throughout the forecast period. This is due to its lubricious coatings on the disposable medical devices including guide wires and catheters. These coatings lower down the insertion force, which reduces the possibilities of severe abrasion between the vessel walls and the surface of the device. Moreover, the qualities including biocompatibility, durability, sterility, and flexibility are some of the major factors propelling the growth of hydrophilic coatings market in the healthcare sector.

Based on substrates, the hydrophilic coatings market is segmented into polymers, glass, metal, nanoparticles, and others. The polymer segment is expected to record a rapid growth in near future witnessing highest CAGR during the forecast period.

Hydrophilic coatings exhibit water attracting properties by forming hydrogen bond with water and is extensively applied to a variety of surfaces and materials, which are used in medical devices, optics, and automotive industries. These coatings are ionic in nature and have negative charge, which supports the hydrogen bonding with water. Furthermore, hydrophilic coatings on the surfaces of medical devices, produces hydrogel material having wettable and lubricious texture, which reduces the irritation caused by the insertion of a medical device into the patient body.

Asia Pacific is expected to project the fastest growth in the global hydrophilic coatings market during the forecast period. The rapidly growing geriatric population in the region is considered as the major factor, supporting the growth of these coatings in the medical devices. Furthermore, the substantial rise in the income of middle-class population is considered as another factor contributing to the growth of this market.

Epoxy resin is a polymer produced by copolymerization of a...

Stearates are esters of fatty acids. They are widely used ...