Press Release: Large Cooling Fan Market is expected to reach US$ 11.4 Billion by 2027

Large Cooling Fan Market is expected to reach US$ 11.4 Billion by 2027

Cooling fan is one of the components that is present in the car cooling system or other electronic devices. It is basically a device that is used for cooling the environment of working machine. It helps to keep the temperature under control for their better performance of machine and electronic devices such as in laptop cooling fan is used to keep temperature in control. Cooling fans act as a most crucial part of heat management system, as they are effective and reliable. Moreover, cooling fans find its application in mining, consumer electronics, agriculture, construction, and others.

The global large cooling fan market is expected to witness significant growth during the forecast period (2020-2027). The growth of the large cooling fan market is majorly attributed to increasing urbanization and infrastructural development in the emerging economies such as India and China that have led to an increase in total spending on various sectors such as power, water, and transport. This is expected to drive demand for large cooling fan across cement and steel plants. The large cooling fans are widely used across the cement plants for removing gases and recirculating air. For instance, in June 2019, Rosenberg Ventilatoren GmbH, a Europe-based company, which manufactures energy efficient motors, fans, and air handling units launched energy-saving DRAG EC centrifugal fan that is specially designed for high efficiency centrifugal air movement. In addition, increasing demand for cement in Asia Pacific from building & construction industry has driven demand for large cooling fans. Moreover, the government in the Asia Pacific region has invested in the construction industry, in order to boost the economy. For instance, according to the Union Budget 2017-2018, US$ 58.6 million was allocated for infrastructure projects in India. This increased demand for cement in the market, which is expected to drive growth of the large cooling fan market over the forecast period.

Covid-19 pandemic has resulted many industries to witness significant shift in their business, owing to disruption in the supply chain. Metal manufacturers experience difficulties such as sourcing the raw material and building of trucks and ships that transport goods to consumers. However, domestic and global supply chain have direct impact on demand for metal. The metal industries have cut discretionary and capital spending, in order to support manufacturing operations. For instance, according to the World Steel Association data, the U.S. produced 7.2 Mt of crude steel in March 2020, a decrease by 6.0% compared to March 2019. Furthermore, according to Coherent Market Insight analysis, Russia produced 5.9 Mt of crude steel in March 2020, down by 4.4% compared to March 2019. Thus, supply chain disruptions hinders demand for large cooling fans in the metal industry. 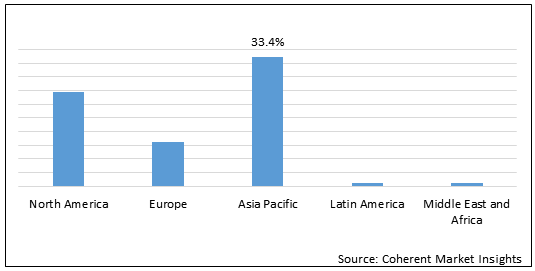 Asia Pacific held dominant position in the global large cooling fan market in 2019 and is estimated to retain its dominance throughout the forecast period. This is attributed to the presence of large number of mines and construction industries in the region. Moreover, underground mining is more hazardous as compared to surface mining due to outcome of many potential hazards such as adverse health effects and release of harmful gases that can lead to suffocation and many other serious problems. Therefore, cooling fans are needed to remove harmful and toxic gases from the mining sector. Moreover, Asia Pacific region is rich in bauxite, copper, iron, aluminum, and coal reserves, which boosts mining activities and this is expected to drive demand for large cooling fans. For instance, according to the Coherent Market Insights’ analysis, iron ore mining in China has increased to 112.5 million metric tons in 2019 from 71 million metric tons in 2018.

North America is expected to exhibit highest growth during the forecast period, owing to the adoption of advanced technologies such as IoT and cloud. The market players are increasingly focusing on innovating their products, in order to improve efficiency and production. Most of the manufacturers are deploying IoT in the cooling fans, which can be automatically controlled through cloud technology. Large cooling fans are connected through internet and adjust their speed according to the temperature of the room. For instance, in May 2020, Delta Electronics, Inc., a Taiwan-based electronics manufacturing company, launched two smart building solutions such as air-conditioning anomaly detection and Bluetooth smart lighting by using Microsoft Azure hybrid cloud computing technology services. The smart building solutions can automatically collect data and the data is sensed by IoT devices for analysis and aids maintenance staff for real time monitoring operations of air conditioning system.

Among applications, the mining segment is expected to hold dominant position in the global large cooling fan market during the forecast period. This is owing to increasing demand for large cooling fan from mining industries in developed and emerging economies. The centrifugal fan find its application in mining industry for wide range of applications such as cooling, ventilation or exhaust gas system. The growing demand for cooling fans across the U.S. mining industry is expected to offer lucrative growth opportunities for the players in the market. For instance, according to the Coherent Market Insights’ analysis, the U.S. produced US$ 7,660 million worth raw mineral materials in 2016, which was US$ 6,551 million in 2015. 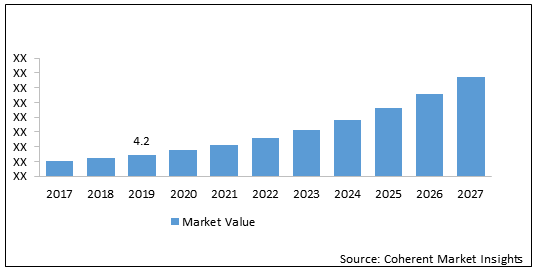 Cooling fans are used to remove excess amount of heat in automotive or electronic systems. Large cooling fan used in many industries such as IT, automobile, mining, and others. Moreover, increasing demand for IoT devices and increasing adoption of advanced driver assistance systems (ADAS) are the major factors that are expected to drive the market growth during the forecast period. For instance, in July 2019, ebm-papst, a Germany-based company, which is leader in the manufacturing of fan and electric motors entered into a partnership with Plug and Play Tech Center, a U.S.-based corporate innovation platform. Through this partnership, ebm-papst utilized Plug and Play Tech Center industry specific platform in the field of IoT. However, critical designing of cooling fans and high power consumption are some of the factors that are expected to restrain growth of the market.

The global large cooling fan market is expected to grow significantly during the forecast period, due to rising demand for cooling fans from various applications such as chemical, construction, manufacturing, food & beverages, and others. In chemical industries, cooling fans are used for air cleaning and for maintaining the environment clean and pure. Increasing demand for large cooling fan from chemical industries in the Asia Pacific region is expected to drive the market growth during the forecast period. For instance, India has some of the largest chemical and petrochemical company in the world such as Tata Chemicals Ltd. and Reliance Industries Limited. Similarly, according to Coherent Market Insight analysis, economies such as Japan and South Korea have plans to expand their manufacturing and power generation sector. Thus, this is expected to drive demand for large cooling fans during the forecast period.

Furthermore, major global players across different regions are focusing on developing new products with new features and technologies to gain competitive edge in the market. Industries are developing cooling fans with new features to cater to the demand from the end users. For instance, in January 2012, Delta Electronics, Inc. launched Air-to-Air Heat Exchanger, a cooling solution for outdoor cabinet applications. This solution is designed to provide complete protection from air contamination and dust humidity in outdoor environment.

Drones are used in construction industry for surveying and...

Cladding systems are used to give a final finish to the bu...

Aerial Work Platform or elevating work platform is a devic...