Press Release: Global Lead Acid Battery Market to Surpass US$ 72.29 Billion by 2025, Buoyed by Growing Demand from the Automobile and Telecom Sector

Global Lead Acid Battery Market to Surpass US$ 72.29 Billion by 2025, Buoyed by Growing Demand from the Automobile and Telecom Sector

The increasing demand from various industries, such as automotive sector, telecom sector, uninterrupted power supply in oil and gas mining, manufacturing, and chemical is expected to the boost the growth of the lead acid batteries market globally. Moreover, the low cost of the batteries coupled with new developments and innovation in lead acid battery products is further expected to augment the market growth. However, environmental restrains, due to lead content and threat from substitute namely lithium-ion battery are the major restraints for the growth of global lead acid battery market.

In 2016, Asia Pacific was the leading region in the global lead acid battery market and is expected to remain the dominant region during the forecast period. The main factors attributed to the growth of Asia Pacific region in market is due to rapid increasing industrialization and globalization in this region. Moreover, increasing number of automobile industry along with expanding disposable income is triggering sales of automobiles, which in turn increases growth for lead acid batteries market. According to China Association of automobile manufacturers (CAAM), during the period 2016-2017, automobile sales in China rose by 6.2%. Lead acid batteries are highly efficient to use as energy storage system. The other factors such as increased government expenditure in retail sector favored in the growth of various industries such as construction, banking, and telecom industry, which in turn will fuel demand for lead acid batteries. According to Indian Brand Equity Foundation (IBEF), Ministry of Commerce and Industry, Government of India, the retail market in India is expected to nearly double to US$ 1 trillion by 2020 from US$ 600 billion in 2015, due to income growth, urbanization, and attitudinal shifts.

North America accounted for the second largest market globally. The developed industrial sector in this region stands to be the major factor contributing to the market growth. The presence of leading automobile companies, which include Toyota, Ford motor company, General Motors, and Fiat Chrysler Automobiles has augmented the demand for lead acid batteries. According to the International Trade Association, exports of automotive parts from the U.S has shown a steady growth from US$ 5 billion in 2012 to US$ 7.2 billion by 2015. Moreover, the developed telecom sector coupled with the increasing oil and gas related activities post the shale gas boom has propelled the need for power storage device hence, surging the demand for lead acid batteries in the region. 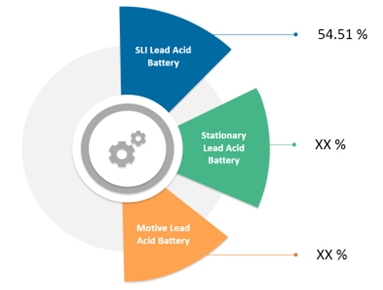 Lead acid uses sulfuric acid and lead electrodes to store electrical energy. The qualities such as low maintenance cost, durability, and reliability makes lead acid batteries more desirable as compared to other substitutes, such as zinc-carbon battery and lithium-ion batteries.

Asia Pacific is the largest market with a market value of US$ 19.41 billion in 2016 and is expected to dominate the market during the forecast period. The rising disposable income coupled with the growth in the automotive and telecom sector are the major reason fuelling the market growth of lead acid batteries. According to China Association of automobile manufacturers (CAAM), China witnessed a sale of around 2,167,000 cars in July 2017.

Key Features of the Study: