Good animal health is essential for efficient use of natural resources, high productivity of proteins such as meat and milk, increased consumer trust and food security in the livestock sector, and protection of farmers and consumers from food borne and other zoonotic viral pathogens. The most common zoonotic viral diseases diagnosed in the Middle East & Africa region over the past few years include rabies, dengue fever virus, Rift Valley fever, influenza virus, West Nile fever, Middle East respiratory syndrome, Alkhurma hemorrhagic fever, Crimean-Congo haemorrhagic fever, and others. Rabies virus is considered an endemic viral infectious disease in animals in Saudi Arabia. Recent scientific data indicated that incidence of rabies is increasing in camels, one of the most important animals in Saudi Arabia. According to the World Health Organization (WHO) statistics published in 2018, over ten thousands of deaths are caused annually by rabies virus in parts of Africa and Asia Pacific. 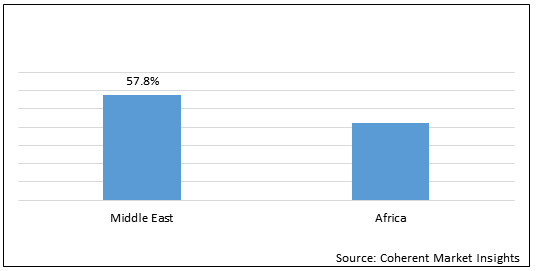 Increasing incidence and prevalence of zoonotic viral diseases in the region, as zoonotic diseases can easily be transmitted to humans working in close proximity with animals, is expected to drive growth of the Middle East & Africa animal healthcare market during the forecast period. According an article published in the National Center for Biotechnology Information, in August 2019, around 21,476 human deaths in Africa occur due to dog-mediated rabies every year. 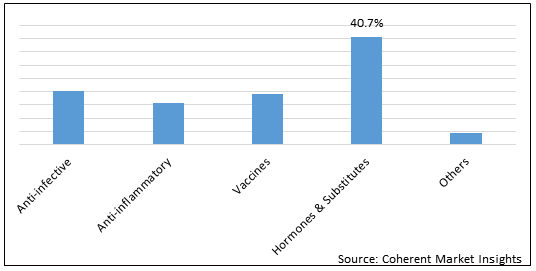 Increasing demand for animal-based products for dietary use in the Middle East and Africa is expected to propel growth of the market during the forecast period. The significant increase in animal farming in the region has also led to rising demand for more efficient animal health services to improve food safety. According to United States Department of Agriculture (USDA), the chicken meat production in Saudi Arabia was expected to reach 650,000 MT in 2018 and 700,000 MT in 2019. The local authorities in the Middle East and Africa regions are also regularly organizing workshops to provide information about improving poultry production.

COVID-19 has had a significant impact on the livestock sector. The actions taken in many countries across the world to stop the spread of the coronavirus such as travel restrictions, nationwide lockdowns, and border controls have led to the following consequences:

Such factors have led to a decrease in sales and processing capacity of animal products, and a slowdown of the market growth.

The major factors restraining growth of the animal healthcare market are high cost of animal healthcare services and lack of pet insurance. Veterinary care for domestic pets in Saudi Arabia is expensive and can cost more than medical care for humans. The average cost of vaccinations, vet visits, medication, and supplies for a dog in UAE is approximately US$ 1,000, annually. In case the animal is diagnosed with diseases, the overall cost is expected to increase. Moreover, pet owners disown their pets due to the lack of favorable pet insurance.

Middle East & Africa market is expected to show significant growth, owing to adoption of animal healthcare products such as vaccines, hormones and substitutes, and others, and implementation of government regulations to improve animal health in the Middle East and African region. For instance, according to the Animal Disease Act of Africa, it is compulsory to provide guidelines for disease control. According to the regulation, it is mandatory to report notifiable diseases and issue permits for the importation of veterinary biologicals. Furthermore, in some African countries such as Kenya, which has strong centralized veterinary services, it is an offence for individuals who are not registered by the local authority to provide animal healthcare services such as disease diagnosis, treatments, and vaccination. According to the legislation, registered veterinarians or healthcare institutions are allowed to provide livestock health services.

Increasing implementation of regulatory guidelines by regional and local authorities present in the Middle East & Africa for overall improvement of animal healthcare is expected to drive the market growth during the forecast period. The implementation of regulatory guidelines is expected to increase awareness among livestock and companion animal owners to provide better facility and care to animals. For instance, in 2018, the Ministry of Climate Change and Environment (MOCCAE) in U.A.E issued new guidelines in Federal Law No. 16 of 2007 for animal welfare and Federal Law No. 18 of 2016. The new animal welfare regulation constitutes of nine articles, which outline animal ownership rules, the healthcare standards of all animal facilities, animal nutrition, and the guidelines for transportation of animals.

Moreover, the regulations for animal vaccination have led to high adoption of animal health products. This is expected to drive the market growth during the forecast period. For instance, in February 2019, the Ministry of Environment Water & Agriculture (MEWA) ministry launched vaccination campaign against foot-and-mouth disease (FMD) in Saudi Arabia. The objective of the campaign was to vaccinate cows and sheep in the country to control and prevent epidemic zoonoses.

What are the growth estimates for the Middle East & Africa Animal Healthcare market till 2027?

The Middle East & Africa animal healthcare market size is estimated to surpass US$ 5,521.4 million by 2027.

What will be the compound annual growth rate (CAGR) for the Middle East & Africa animal healthcare market during the forecast period?

The Middle East & Africa animal healthcare market is expected to register a CAGR of 5.2% during the forecast period (2020-2027).

What are the major drivers for the Middle East & Africa animal healthcare market growth?

Which segment, based on product type, is estimated to account for the largest market share in the Middle East & Africa animal healthcare market in 2020?

The hormones & substitutes segment is expected to hold major market share in 2020, owing to increased rate of livestock farming in Middle East and Africa region.

Which are the key factors hampering growth of the market?

Major factors hampering growth of the market are high cost of animal healthcare services and lack of pet insurance.