Global Mobile Phone Accessories Market to Surpass US$ 132.6 Billion by 2026

The increasing adoption of smartphones worldwide is one of the key factors driving growth of the market. For instance, according to the Coherent Market Insights analysis, the sale of smartphone in 2014 was 367,334.7(thousand units) and reached to 403,109.4 (thousand units) in 2015 worldwide.

Furthermore, increasing disposable income that promote consumers to highly spend on media, entertainment, networking, and mobile communication is major factor contributing in increasing demand for smartphones, which in turn is expected to propel growth of the mobile phone accessories market. Use of portable devices such as smartphones, tablets, and others for listening music increases the demand for accessories such as headphones, Bluetooth and WiFi speakers, which is expected to drive growth of the mobile accessories market during the forecast period (2018-2026).

However, increasing incidence of hearing impairment in users is one of the major factors affecting growth of the mobile phone accessories market. For instance, according to the study conducted by the American Academy of Otolaryngology, in April 2018, increasing usage of cell phone over 60 minutes per day could result in damaging hearing ability. Moreover, according to the World Health Organization (WHO), over 5% of the world’s population suffers from hearing impairment. Hence, all these factors will adversely affect growth of the market. 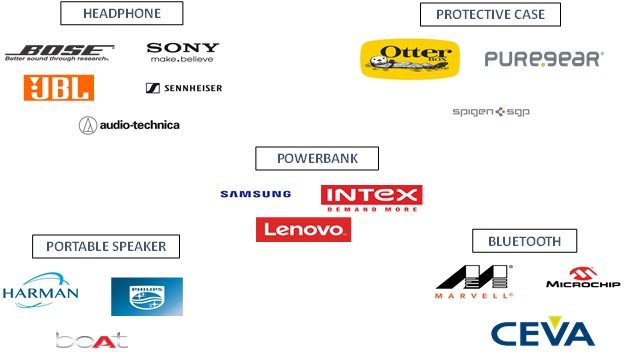 On the basis, of product type the protective case accounted the largest market share in 2017 and expected to remain largest during the forecast period (2018-2026), owing to increasing demand of wireless accessories. The factor attributed to growth of the market is technological advancements in various audio devices that have transformed the fashion of listening music. This factor is expected to increase demand for wireless audio devices such as portable Bluetooth speakers. Moreover, Bluetooth speakers provide hassle free maintenance, increased durability, and good functionalities that attract consumer towards the adoption of Bluetooth for their devices. Such high adoption of wireless devices is expected to fuel growth of the market during the forecast period (2018-2026).

Key players such as Apple, Inc., Samsung, Panasonic Corporation, and others are focused on investments and R&D to increase the functionality and features of smartphones. This in turn is expected to help companies to differentiate their products from competitors and maintain strong presence in the market. For instance, according to the Coherent Market Insights’ analysis, Samsung Electronics Co invested US$ 12.6 billion on mobile research and development (R&D) activities in 2015 for developing new technology and products, which further increases the demand for mobile phone accessories during the forecasted period.(2018-2026).

According to GSM Association Intelligence Report’s published in October 2016, 44% smartphone users worldwide are subscribed to internet connectivity and this is projected to surpass 60% by 2020. Proliferation of smartphones and high internet usage in conjunction with significant paradigm shift of consumers from physical payments to digital transaction is among the key trends to increase demand for smartphones. Accelitec WalletBuilder, Adyen, Airtel Money, Paytm, Allied Wallet, Alipay, and Amazon Pay are some of the prominent payment modes that have gained significant traction in the recent past. Increasing ease of transactions through these payment mediums has led to significant rise in use of smartphones and this in turn is expected to be another factor for propelling demand for mobile phone accessories during forecast period.

Smart umbrella is an umbrella which has built-in sensors that collects pressure, temperature, humidity, and light data...