Drill bits are essential tools that are utilized in the oil and gas industry to drill cylindrical boreholes for E&P activities in the production of crude and gas. Drill bits produce drill cuttings when used in for the formation of boreholes. The cuttings that are formed by the bit are usually removed from the wellbore and brought to the surface through circulation.

The increasing dependence on crude oil and natural gas, especially in emerging economies has resulted in an increase in E&P activities globally. The type of drill bit to be used for drilling depends on the nature of the formation. The drill bit has a typical rotary motion and is situated at the tip of the drill string, underneath the drill pipe and collar. It is usually made up of 2 or 3 cones with materials having a higher degree of hardness, such as tungsten carbide, steel and natural or artificial diamonds and have sharp teeth that can easily penetrate into the required structure.

North America dominated the drill bits market in 2016 and is expected to retain its dominance throughout the forecast period. North America accounted for 30% of the market share in terms of revenue in 2016. The increasing shale gas production is a major factor for this dominance. This is mainly due to the growing oil & gas industry, coupled with the high demand for petroleum. The U.S. holds the majority of shares in the wireline services market in North America, as it is the largest consumer of oil and gas. According to the Energy Information Administration (EIA), during 2014, the US crude oil production recorded a tremendous increase by 1.2 million barrels per day (bbl/d) to 8.7 million bbl/d, and it was the largest volume increase since 1900. This rapidly growing oil & gas industry in the region, is majorly driving the growth of wireline services market. Furthermore, the recently discovered shale oilfields in the region is fuelling the adoption of well intervention and the evaluation of petro physical data acquired from oil wells, this in turn propelling the growth of wireline services market. As in 2016, US Geological Survey (USGS) discovered a large deposit of untapped reserves in the US, at the Wolfcamp formation, located in Texas with an estimated average of 16 trillion cubic feet of natural gas and 20 billion bbls of oil. 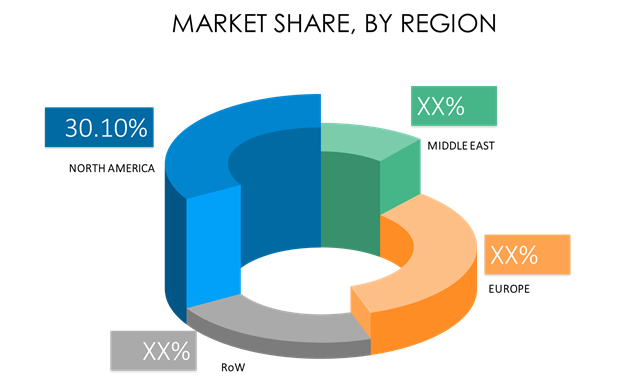 North America is expected to be the fastest growing region in the global oilfield drill bits market during the forecast period. The discovery of shale gas in the U.S. has resulted in unprecedented demand for drill bits, as the country looks to reduce its dependence on crude oil imports from the Middle East. Middle East accounted for 23.5% market share in terms of revenue in the global oilfield drill bits market. The presence of numerous countries such as Saudi Arabia, Iraq and Oman amongst others whose economy primarily depends on oil and gas production is expected to result in an increasing demand.

Oilfield drill bits are important tools used in the drilling of boreholes in the exploration of oil and gas activities. The drill bits are selected depending on the type of formation that is being drilled. Drill bits produce drill cuttings which can be removed later using drilling mud. Irrespective of type of drill bit, these bits need to suffice two main conditions that include maximizing the formations rate of penetration (ROP) while providing a long and sturdy service life.

North America dominated the oilfield drill bits market in 2016. This is majorly due to the shale boom in the US. Some of the major players in the shale industry are the Permian, Eagle Ford, Marcellus, and Barnett. This has resulted in an increase in E&P activities in this region, which in turn is expected to result in an increase in the demand for oilfield drill bits in the North American region.

The Middle East is witnessing an increase in E&P activities after the recent oil slump of 2014. Apart from the Middle East other regions such as Europe, Asia Pacific and Africa are also expected to see an increase in oil and gas projects being undertaken during the forecast period. The rising demand for fuel especially amongst the emerging nations of Africa and Middle East has augmented the demand for oil and gas in these regions.  For instance, in September 2017, PetroSA and Russia based Rosgeo signed a US$ 400 million agreement to develop oil and gas reserves off the coast of South Africa. In June 2016, in Angola, state-owned Sonangol announced a gas discovery in the Kwanza Basin which is estimated to hold 813 million barrel of oil equivalent. BP Plc holds a block in the discovered field in a joint venture with Sonangol. This, in turn, is expected to boost the demand for oilfield drill bits globally.