Press Release: Orthopedic Splints and Casts Market to Surpass US$ 3.6 Billion by 2026

Orthopedic Splints and Casts Market to Surpass US$ 3.6 Billion by 2026

Orthopedic splints and casts are orthopedic devices used to protect and support fractured bones and joints. Casts and splints are made from fiberglass or plaster, and can be easily molded to the shape of injured arms or legs. The casts are designed to provide functional support to fractures and soft tissue injuries, allowing enhanced flexibility and mobility with semi-rigid form, thus reducing immobilization-related problems such as atrophy or joint stiffness, thus shortening the healing process.

Splints, also known as half-casts, are easier and majorly used to heal and support a variety of acute orthopedic conditions such as sprains. Splints are convenient to use, as they can be easily tightened or loosened as per the injured leg or arm. Readymade splints are available in various shapes and sizes, thereby allowing easier and faster use in the medical settings. 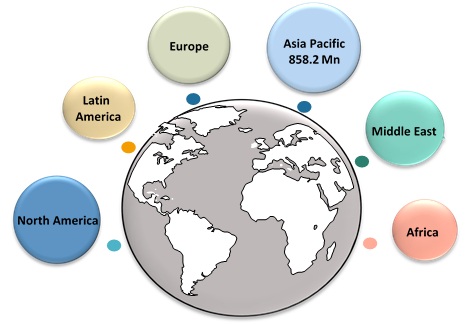 Increasing incidence of musculoskeletal conditions to drive growth of the market

Growing prevalence of musculoskeletal diseases such as arthritis and osteoporosis, which are associated with growing geriatric population, is expected to drive growth of the orthopedic splints and casts market.

According to International Osteoporosis Foundation statistics, 2017, an estimated 8.9 million fractures are caused annually by osteoporosis, resulting in an osteoporotic fracture every 3 seconds, with around 1.6 million hip fractures occurring globally each year, the number of which is expected to reach 4.5 million by 2050.

Also, according to the World Health Organization (WHO), 2013, around 28.2% of the global population aged 60 years and above, suffered from osteoarthritis with an estimated 80% people recorded with mobility handicaps. Furthermore, WHO also states that increasing life expectancy and growing geriatric population is expected to increase the prevalence of osteoarthritis and is expected to be the fourth most common cause of disability by 2020.

However, the formation of pressure sores, compartment syndrome, and thermal injuries during casting or splinting process and development of bacterial and fungal infections occurring beneath the casts and splints are factors restraining the market growth.

Asia Pacific is expected to hold a dominant position in the global orthopedic splints and casts market over the forecast period, owing to rising medical tourism in India, Singapore, and Thailand, thereby increasing the influx of foreign patients for affordable treatment of post-surgical management for speedy recovery.

According to survey by Pacific Prime, 2015, among 10 million patients traveling per year for medical treatment, over 90% visited countries such as Singapore, Thailand, and India, thus augmenting the orthopedic splints and casts market growth. Furthermore, according to the study by Brink Asia Pacific Risk Center, 2017, around 4 million medical tourists traveled to India to seek health care services, 3.5 million foreign patients travelled to Thailand, and 900,000 patients to Singapore in 2016. This number is expected to grow by 10-14% annually by 2020.

Moreover, according to the Government of India, Ministry of Road Transport & Highways Transport Research Wing, 2016, road accidents is the major cause of injuries, disabilities, and death in India, accounting for 1,317 accidents per day with an average of 494,624 injured people in 2016. Thus, growing number of road accidents in India and China is expected to increase demand for orthopedic casts and splints, thereby increasing the market growth.

North America is expected to gain significant traction over the forecast period, owing to higher rate of sports injuries in the U.S. According to the American Academics of Pediatrics, 775,000 children aged 14 years and younger are admitted in hospital emergency rooms for sports-related injuries each year. Moreover, according to the National Institute of Health, 2012, knee injuries are common among adolescent athletes, with an estimated 2.5 million sports-related injuries registered annually in emergency departments in the U.S. This number is expected to increase over forecasted period, thereby propelling the orthopedic splints and casts market growth in the region.

Orthopedic splints and casts are majorly available in fiberglass and plastic materials, which are applied over the injured area after being dipped in water. Fiberglass cast and splint products provide high patient compliance in terms of wearing comfort, water resistance and lasting support, improved X-ray radiolucency, and minimized muscle atrophy and other immobilization-related issues, thus, increasing the adoption of these products. Moreover, splints and casts are widely used to manage trauma and fall injuries, as they promote healing, help maintain bone alignment, and protect the injury.

Major factors driving growth of the orthopedic splints and casts market include increasing number of age-related orthopedic disorders and improved healthcare facilities in emerging economies. Furthermore, wide adoption of orthopedic splints and casts with increasing surgical procedures and trauma cases is expected to fuel the market growth over the forecast period. According to the study by Orthoknow, 2012, around 2.9 million joint replacement procedures occur annually worldwide, including over 1.4 million hip procedures, 1.1 million knee procedures, and around 100,000 shoulder replacements. Also, according to the Centers for Disease Control and Prevention, 2016, around 1.6 million hip fractures occur each year globally, the number of which is expected to reach between 4.5 million and 6.3 million by 2050.

However, complications associated with casts and splints such as deep vein thrombosis, allergic reactions, neurovascular deficit, in turn, are expected to limit the adoption of these products, further hindering the orthopedic splints and casts market growth.

Metal trauma implants are medical devices which are used f...

Total knee arthroplasty is one of the most common surgery ...

External fixators is a surgical treatment, in which the ex...