Press Release: Plastic Films Market to reach around US$ 131.9 Billion by 2027

Plastic film is a polymeric material produced from different resins with a unique combination of properties. They are widely used across packaging, decoration, plastic bags, labeling, electrical fabrication, building construction, industrial purposes, and others. Different types of plastic materials are Polyethylene terephthalate (PET), Polypropylene (PP), Polyvinyl chloride (PVC), Polystyrene (PS), polyamide (PA), etc. Among all these PVC is the most commonly used plastic for producing safety boots, construction material such as window frames and PP films are another major plastic used for manufacturing stationery products, plastic components and other applications such as packaging, labeling, decoration, industrial application, and electronic & electrical application.

On basis of the region, the Europe region dominated the global plastic films market in 2018, accounting for 31.5% share in terms of volume, followed by Asia Pacific and North America, respectively.

The high cost of raw materials as the manufacturing of biodegradable plastic films is relatively high as compared to conventional film is expected to restrict the market growth of the plastic film. Manufacturing of biodegradable film requires additives which further adds to the cost of the manufacturing. Hence, the high cost of raw materials is expected to negatively impact market growth to some extent.

Improving standard of living and urbanization around the globe is offering lucrative growth opportunity to the market of plastic film. Due to improving standard of living people increased spending on plastic film laminated products such as furniture, cabinets, and flooring material laminated with decorative plastics. Hence, rising demand for such products will favor the market growth of plastic film over the forecast timeframe.

Ongoing research and development activities coupled with the increasing product lines due to the addition of novel and eco-fielding product will offer lucrative opportunities to the market of plastic film over the forecast period. Moreover, the rising adoption of more eco-friendly technologies to develop plastic films due to rising awareness regarding the environment is further projected to foster market growth over the forecast period.

Growing demand for consumer electronics products across developing regions such as China, Japan, India, etc. is projected to increase demand for plastic film. For example, usage of PVC is gradually increasing in electrical products owing to its various properties such as the ability to suppress and reduce combustion during a fire, etc. Hence, the rising application of PVC film will favor market growth over the forecast period. 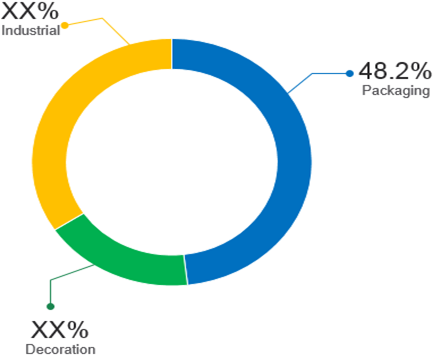 On the basis of application, in 2018, packaging segment has accounted the largest market share of 48.2% in terms of value, followed by industrial and decoration respectively. 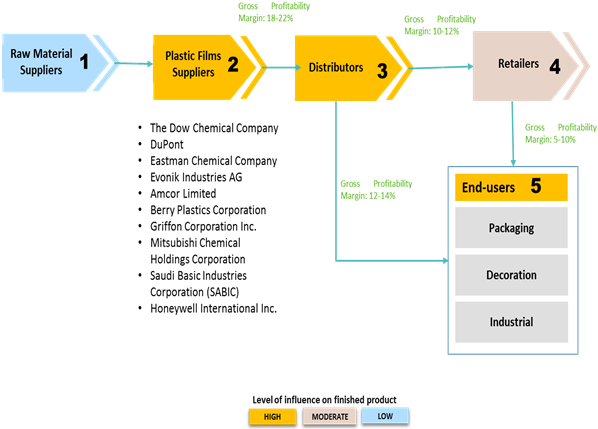 Plastic film is a thin continuous form of polymer material and is a popular choice of packaging material. Plastic films are commonly used in various industries such as packaging and construction industries. Moreover, plastic films can be easily reused and recycled and find a range of applications, which includes plastic bags, photographic films, videotapes, landscaping and labels.

Furthermore, based on product type, the global plastic films market is segmented into polyethylene terephthalate (PET), Polyvinyl chloride (PVC), polyvinyl chloride (PVC), Polypropylene (PP), Polyethylene(PE), and Others (PS, PA, EVA, etc.). Among these segments, the polyethylene terephthalate (PET) type is expected to foster market growth during the forecast period, owing to the increasing demand for PET type of plastic films in food packaging.

Furthermore, the Europe dominated the global plastic films market in 2018, owing to the increasing use of plastic films packaging in growing food & drink sector packaging sector in the region. For instance, according to the report released by FoodDrinkEurope,   the European food & drink manufacturing industry generates the turnover of US$ 258.1 billion in 2018. As a result, this growth in food and beverages industry is estimated to foster the growth of food and beverages packaging which in turn is expected to drive growth of the global plastic films market during the forecast timeframe.

Sachet packaging is a form of flexible packaging, which is...

Cosmetic packaging is packaging of cosmetic products and a...