Plastics are the most widely used rigid packaging material. This can be attributed to the high chemical resistance, high strength and toughness compared to glass which is brittle. Its low weight allows greater flexibility during transit, which results in both space and fuel efficiency. Moreover, plastic is more easily recycled than glass, which has resulted in its dominance in the rigid packaging market. Despite its numerous advantages, plastic is non-biodegradable and is a major source for environmental pollution, which has resulted in the shift towards sustainable packaging. Paper & paperboard are increasingly being utilized as a replacement for plastic packaging. In 2016, according to the U.S. Forest and Paper Association, the country recycled over 70% of its used paper. Further, metal, wood and glass are losing importance due to their high manufacturing costs and lack of flexibility.

Asia Pacific is projected to witness the fastest growth in rigid packaging market. High demand for rigid packaging products in the pharmaceutical industry in emerging economies such as India and China is one of the major factors driving the demand for rigid packaging in the region. Increasing infant and geriatric population has led to the heightened demand for healthcare products. Moreover, affordable healthcare in countries such as Thailand and India has boosted medical tourism sector in the region. According to the Indian Ministry of Tourism and Culture, in 2016, 361,060 foreign patients visited India for medical treatments.

North America and Europe markets are also expected to exhibit significant growth due to high consumption of consumer goods and electronics. Furthermore, the pharmaceutical industry in these regions is highly matured and due to the high prevalence of lifestyle diseases in these regions, the market in the region is projected to witness significant growth during the forecast period. The rigid packaging market in North America was valued at US$ 74.4 billion in 2016, while Europe stood at US$ 98.6 billion in the same year.

The GCC in Middle East has a populace with high disposable incomes, which has led to increasing consumerism. Electronics and consumer goods sales have significantly risen, driving the rigid packaging industry as well. Political and economic turmoil in Syria, Iraq and Iran has resulted in a declining market in these countries. This has been compensated by high growth in the GCC countries.

The rigid packaging market in Latin America is experiencing a significant growth at present. Brazil has the fourth largest pharmaceutical industry in the world. Argentina, Mexico and Brazil are also among the largest producers of non-patented generic drugs, which are exported to over 40 countries. Mexico being a member of North American Free Trade Agreement (NAFTA), has access to the lucrative markets of U.S and Canada which has resulted in Mexico becoming a manufacturing hub for international pharmaceutical companies. However, other end use industries in Latin America are stagnant and may hinder market growth. The Latin America rigid packaging was valued at US$ 61.4 billion in 2016 and is projected to expand at a CAGR of 3.31% during the forecast period.Figure 1. Global Rigid Packaging Market Share (2016), By Region 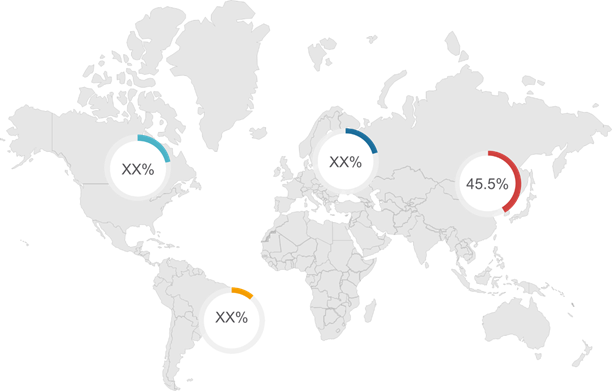 Asia Pacific dominated the global rigid packaging market in 2016 and is expected to retain market dominance throughout the forecast period, with major contribution coming from the emerging economies of India and China.

Packaging is a technology, which involves enclosing and protecting various types of products for storage, distribution, sales and use. The increasing demand for healthy, safe and convenient food over the last couple years in Asia Pacific, Europe and North America has been rapidly driving the global market for rigid packaging. Further, the use of polyethylene terephthalate (PET), as a packing material for food & beverages, pharmaceuticals and household products, due to its strength, versatility and recyclability is expected to serve as a major driver for the rigid packaging market.

In terms of revenue, rigid packaging market is expected to expand at a CAGR of over 4.05% during the forecast period (2017-2025). According to a study conducted by Coherent Market Insights, the food and beverages segment is estimated to reach US$ 181.31 billion by the end of 2017. Rigid packaging drives the cutting edge solutions to innovative packaging solution, which protects fragile goods. Further, they come at a low cost and are easy to transport. High Density Polyethylene (HDPE), is largely used, due to its high chemical resistance and tensile strength. It finds wide application in various end use industries, such as food & beverages and healthcare industries among others. Also, the non-pigmented HDPE bottles and containers are translucent and provide better stiffness and best suited for products having a short shelf-life, such as milk. However, due to rising consumer preferences regarding health and bio based packaging material, the growth of the plastic packaging market is expected to witness a severe challenge during the forecast period.

The rigid packaging market is segmented on the basis of material, packaging type and end-use industry. Plastics material segment is expected to project a rapid growth during the forecast period on account of rising demand for air tight packaging in pharmaceutical products and food products. Food and beverages end-use industry segment is expected to gain major traction as the use of plastics in Asia Pacific, rises due to an increased demand for high quality packaged foods. Although, environmental concerns have boosted sustainable packaging market in Europe and North America. Paper and paperboard are increasingly being utilized in these regions.

Pharmaceuticals is the largest end-use industry in the blister packaging market. Tablets and capsules are widely sold ...

Flexible paper packaging are used to protect and package products. These are environmentally friendly bags that are av...

Flexible foil packaging is available in different type of materials such as aluminum, paper, and plastic that offers v...