Small Satellite Market to Reach US$ 30 Billion by 2026

Small satellites are satellites of low mass and size that are usually under 500 kg. All such satellites can be referred to as ‘small’. However, different classifications are used to categorize these satellites based on mass. Small satellites reduce the huge economic cost of launch vehicle and cost associated with its construction. This has led to increasing participation of emerging economies and startups towards satellite launch for various purposes such as communication and security. For instance, in January 2018, Indian Space Research Organization (ISRO) launched new small satellite called Microsat.

The global small satellite market is expected to witness significant growth during the forecast period (2018–2026). The growth is majorly attributed to development of advanced small satellites such as small sat express of HawkEye 360 Inc, GTOSat-Cubesat mission and Asteria small satellite of NASA that are capable of performing a number of operations such as earth observatory and communication.

Increasing use of mobile phones, communication modules, data-based services, and GPS systems, owing to next-generation 4G/LTE networks is driving growth of the small satellite market. These services are used by various sectors such as automotive, electronics, military, IT, communication, and others. For instance, according to a report published by Pew Research Center, in June 2017, 77% of the people in the U.S owned a smartphone in 2017, which accounted for a 35% compared to 2011.

Majority of trade worldwide is carried by sea, which increases demand for small satellites for tracking ships with GPS. Moreover, several companies in the oil and gas transport, educational institutes, and private companies use GPS in official vehicles and tankers to locate their vehicles and maintain transparency. Therefore, these applications rely on small satellites for communication as a viable and cost-effective solution, which is expected to boost the market growth. 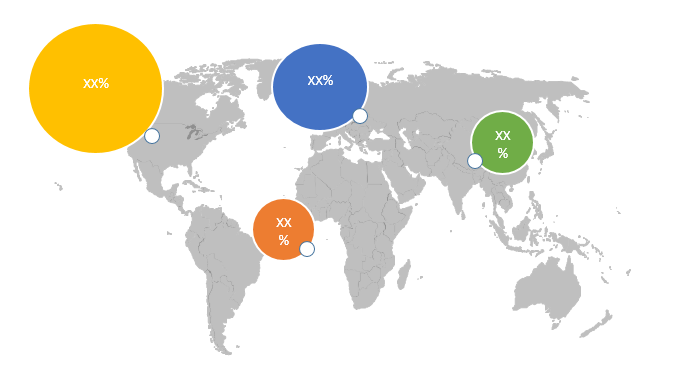 Earth observatory segment is expected to witness considerable growth in the market over the forecast period:

Similarly, in 2016, the National Oceanic and Atmospheric Administration (NOAA) signed a contract with Spire Global to collect and evaluate weather data across various regions. Spire Global and GeoOptics have developed GPS radio-based small satellites that can infer temperature, pressure, and humidity at various altitudes.

North America is expected to hold dominant position in the small satellite market over the forecast period:

Among Regions, North America held dominant position in the global small satellite market, accounting for 55% market share by value in 2017. The region is expected to retain its dominance in the market over the forecast period, owing to presence of major players such as National Aeronautics Space Association (NASA), Space Exploration Technologies Corp., and The Boeing Company.

Increasing demand for weather forecast software such as AccuWeather, The Weather Channel, Yahoo Weather, and Google Weather is also expected to boost the market growth. The increase in demand is mainly attributed to growing air and sea transport services and weather monitoring services for disaster management. For instance, in December 2018 HawkEye 360, Inc. announced a successful launch of Pathfinder Mission cluster of three formation- flying small satellites. The satellites are tasked to collectively locate and sense radio emissions beamed from the ground, especially from the vehicles that are to be tracked.

Small satellite is also referred as miniaturized satellite or small sat, usually under 500kg mass. Small satellites are designed for a specific missions such as geological monitoring or communications and are often laced with a single instrument. According to Coherent Market Insights’ analysis, around 6,200 new small satellite are expected to be launched during 2018 – 2028.

Small satellite reduces large economic cost of launch vehicles and cost associated with construction of satellites. For instance, according to University of Colorado at Boulder November 2018 report, a cubesat mission costs around US$ 2 million to build and operate, which is far less than full-sized satellite expanses.

Technical challenges associated with small satellites are lack of sufficient power storage or room for propulsion system, which may hinder the market growth.

*Browse all the market data tables and figures on "Global Small Satellite Market- Global forecast to 2026”.