Sodium Sulfide Market to reach around US$ 672 Million by 2027

Sodium Sulfide is a chemical compound that is alkaline in nature when exposed to air and smells like rotten eggs. It has a wide range of application across pulp and paper industry, textile industry, water treatment, and various chemical manufacturing processes such as manufacturing of sulfur dyes, rubber chemicals, and oil recovery. Sodium sulfide is also used in the photographic industry for protecting the developer solution from being getting oxidize. Moreover, it is also used in the pulp and paper industry in the Kraft process. Furthermore, it is also used to produce elastic synthetic products, sulfur colors, and leather products.

On basis of the region, the Asia Pacific region dominated the global sodium sulfide market in 2018, accounting for 35.9% share in terms of volume, followed by Europe and North America, respectively.

Another major concern associated with the sulfide-rich effluents sewer corrosion, malodours, and toxicity to humans, livestock & agriculture which is expected to hinder the market growth of sodium sulfide. Moreover, strict rules and regulations imposed on the usage of sodium sulfide is further anticipated to hinder the market growth over the forecast period.

Sodium sulfide is highly alkaline in nature and may cause skin burns and other skin related problems upon exposure. Therefore, this side-effects associated with the usage of sodium sulfide is expected to hinder the market growth over the forecast timeframe.

The booming textile sector due to rising production and exports of textile is expected to propel the market growth of sodium sulfide. According to the India Brand Equity Foundation, India's overall textile exports during FY 2017-18 stood at US$ 39.2 billion in FY18 and is projected to reach US$ 82.00 billion by 2021. Hence, rising product and exports of textile are projected to foster the market growth of sodium sulfide over the forecast timeframe.

Expanding oil &gas industry where sodium sulfide is used to recover the oil is expected to foster market growth. According to the U.S. Energy Information Administration, U.S. oil production reached 9.97 million barrels per day (b/d) in December 2017 and 12.04 million b/d in December 2018. Therefore, the rising production of oil, especially in the U.S. region, is expected to augment the market growth of sodium sulfide over the forecast timeframe. 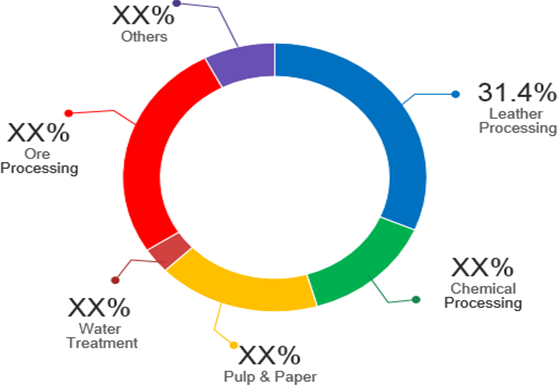 On the basis of application, in 2018, leather processing segment has accounted the largest market share of 31.4% in terms of value, followed by ore processing and pulp & paper respectively. 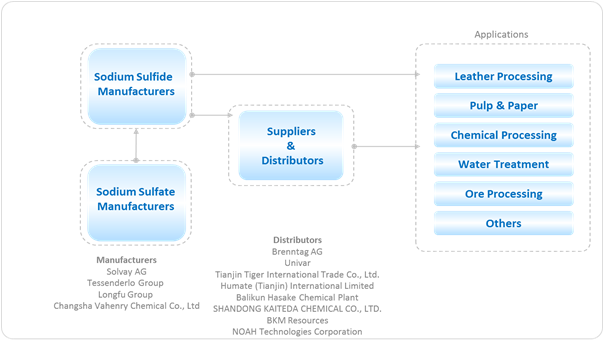 Moreover, the growing pulp and paper industry is another major factor that is projected to propel the market growth of sodium sulfide. This is attributed to the wide use of sodium sulfide in the production of paper products. Moreover, according to a report released by Indian Paper Manufacturers Association (IPMA) detailing the paper industry overview for 2017-2018, the per capita paper consumption in India is around 13-kgs, while the global average is 57-kgs. These factors are estimated to be the growth factor of the global sodium sulfide market in the coming years.

Furthermore, the Asia Pacific region dominated the global sodium sulfide market in 2018, owing to the increasing number of metal mining and metal processing industries and investments in the construction industry in this region. For instance, according to the Indian Mine Industry, the mineral production for the year 2018-19 is estimated to be 108.1 million as compared to previous year production 104.9 which is showing positive growth of 3%. As a result, this scenario is estimated to foster the growth of the global sodium sulfide market during the forecast period.

What are the growth estimates for sodium sulfide market till 2027?

The global sodium sulfide market is estimated to reach around US$ 672 million by the end of 2027, in terms of revenue

Among regions, Asia Pacific held a dominant position in the market in 2018, accounting for 35.9% share in terms of volume, followed by Europe and North America, respectively.

Sodium acetate is produced by reacting acetic acid with ...