The global special purpose needles market is estimated to account for US$ 18,545.3 Mn in terms of value by the end of 2027.

Increasing in prevalence of gynecologic cancer is expected to boost growth of the global special purpose needles market over the forecast period. For instance, according to the American Cancer Society, 110,070 new cases of gynecologic cancer were diagnosed in the U.S. in 2018 and the disease resulted in around 32,120 deaths in the same year.

Moreover, increasing number of biopsy procedures is also expected to boost growth of the market. For instance, according to a study by Truven Health Analytics, an IBM Company, in March 2018, a total of 18,903,337 breast imaging and biopsy procedures were received by the nationally projected population during a 13-month follow-up period in the U.S.

Moreover, injections procedures may lead to multiple temporary or permanent side effects such as itchy skin, backache, nausea, loss of bladder control, abscess formation, and nerve damage. This in turn has led to increasing preference for alternative procedures such as oral drug administration and other traditional treatments including Ayurveda, Chinese medicine, and acupuncture.

Increasing preference for pain-free needles is expected to offer lucrative growth opportunities for players in the market. Diabetes patients require a regular dose of insulin, which increases demand for needles that offer less or no discomfort.

Moreover, increasing concerns regarding disposal of contaminated needles and other medical waste has led to stringent regulations on disposal of medical waste. Therefore, markets may focus on developing biodegradable needles.

Increasing focus on mitigating needlestick injuries, HIV, and blood borne diseases due to needle has prompted companies to develop and introduce various needles with enhanced safety features. Products with advanced features such as self-retracting needles and needles with safety locking are gaining traction among healthcare professionals and patients.

In Europe, only products with CE mark are used. Most countries in the region have favorable reimbursement mechanism for special purpose needles. The demand for pen needles and biopsy needles is high in the region due to increasing prevalence of diabetes and cancer. 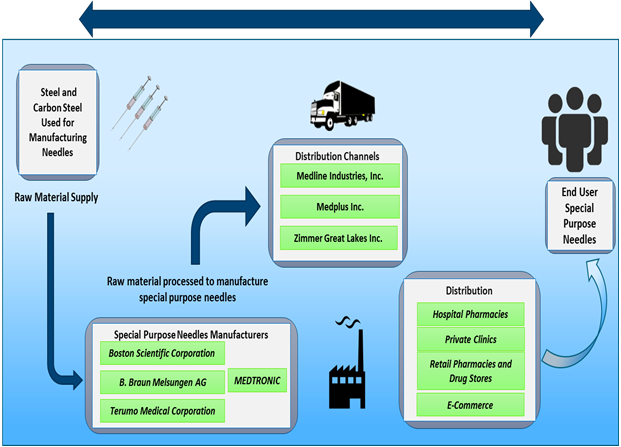 Major players in the market are focused on development and launch of new products to expand their product portfolio. For instance, in January 2020, Montmed, Inc. announced that the U.S. Patent and Trademark Office issued US Patent for the company's SiteSmart, a novel pen needle system designed to favor adherence to a healthy injection site rotation regimen.

Major players in the market are also focused on adopting M&A strategies to expand their product portfolio. For instance, in January 2019, IZI Medical Products acquired a set of biopsy and breast localization needles from Cook Medical for an undisclosed amount.