The U.S. BOP testing services market is expected to witness significant growth during the forecast period (2021–2028). Increasing demand for nipple-up & nipple-down services is driving the market growth during the forecast period. Due to increase in oil & gas exploration activities, there is rise in accidents that occur due to the overflow of oil & gas from wells on onshore & offshore fields. Therefore, in order to monitor the oil & gas wells, blowout preventer is used to prevent blowouts or uncontrolled flow of oil or natural gas from rigs. This blowout preventer seals the top of the wellbore that helps in controlling the pressure during oil production and drilling activities. BOP testing services such as nipple-up and nipple-down services are used for the installation and de-installation of blowout preventer (BOP).

Nipple-up services are used for the installation and hydraulic torque wrenching of blowout preventer, choke manifolds, and flow lines. Therefore, the process of fixing or installing the pressure control equipment on the wellhead is known as nipple-up services. Moreover, nipple-down service is offered by BOP service providers, in order to remove the pressure control equipment from wellbore, which includes dissembling of BOP that mainly depends on the configuration of casing strings and wellhead. Therefore, increasing demand for blowout preventers in the oil & gas industry is expected to boost demand for nipple-up and nipple-down services in the U.S.

COVID-19 has significantly disrupted almost all the industries including infrastructure, transportation, oil and gas, manufacturing, and others. To combat COVID-19 pandemic, most of the countries had implemented lockdown restrictions, which are now being eased slowly on phase-wise and industry-wise basis. This has significantly impacted the manufacturing sector, as the facilities across the globe were temporarily shut down. The unprecedented restriction on travel, work and most of the industries cut their production by billions of barrel of oil, trillion of cubic meters of gas and millions of tons of coal from global energy system. More than 15 largest oil and gas companies have announced specific cuts to their 2020 capital spending programs. For instance, in April 2020,  Exxon Mobil Corporation , a U.S. based natural gas company, announced their plan to reduce capital expenditure by 30% to US$ 23 billion down from previously announced 33 billion, owing to demand weakness arising from COVID-19 pandemic.

Southern U.S. is expected to hold dominant position in the U.S. BOP testing services market during the forecast period.

Southern U.S. held dominant position in the U.S. BOP testing services market in 2020, accounting for 46.0% share in terms of value, followed by Rest of U.S. and Eastern U.S. 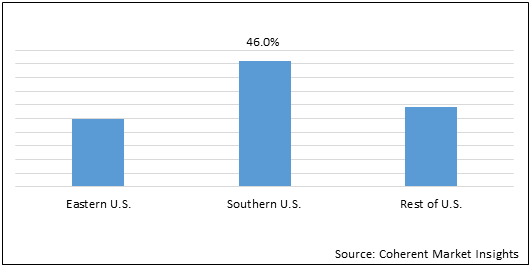 Among sub-region, Southern U.S. held dominant position in the U.S. BOP testing services market in 2020, and is expected to retain its dominance throughout the forecast period. The increasing production of crude oil and natural gas is propelling growth of the southern U.S. BOP testing services market. Texas, Alabama, Delaware, Florida, Kentucky, Georgia, Louisiana, Mississippi, Missouri, Tennessee, Virginia, West Virginia, Arkansas, Oklahoma, and Gulf of Mexico are the states included in Southern U.S. The massive growth in production of crude oil in states such as Texas, Oklahoma, and the Gulf of Mexico is expected to drive growth of the Southern U.S. BOP testing services market in the near future. Texas is a national leader in oil and natural gas production. For instance, according to Houston Chronicle, Texas oil wells produced more than 1.54 billion barrels of crude oil in 2018, breaking the previous record of 1.28 billion barrels set in 1973. Furthermore, natural gas production in Texas also increased to 8.8 trillion cubic feet in 2018.

Rest of the U.S. is also expected to exhibit significant growth during the forecast period. Increasing well drilling activities is propelling growth of the Rest of U.S. BOP market. The Rest of U.S. includes regions such as California, Alaska, North Dakota, and others excluding eastern and southern U.S. The presence of oil fields has resulted in increasing number of drilling activities in the region. For instance, Bakken Shale and Williston Basinin, two of the largest oil reversers of the world, are present in North Dakota.

Onshore segment is expected to drive the market growth during the forecast period.

Among application, onshore segment is expected to hold dominant position in the U.S. BOP testing services market during the forecast period. The U.S. is one of the leading oil and natural gas producers, owing to its vast oil and gas resources and technological advances in hydraulic fracturing and horizontal drilling. For instance, in 2018, according to the Independent Petroleum Association of America (IPAA), the U.S. produced 11.3 million barrels per day and became the largest producer of oil and gas in 2018, after Russia and Saudi Arabia. The Federal Land Policy and Management Act of 1976, and the Mineral Leasing Act of 1920 have authorized the Bureau of Land Management (BLM) to manage federal lands, including leasing certain lands for oil and gas development. Moreover, the oil and gas management program includes over 63,000 onshore oil and gas wells on federal lands. 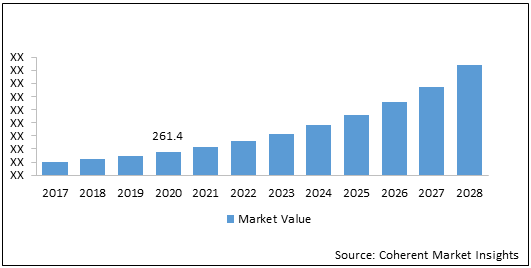 The BOP testing services includes, BOP inspection at the rig site, analog & digital data recording options compliant with regulatory requirements, and API-compliant & field-proven testing of BOP components. Therefore, key companies are focusing on offering testing services for BOP handling systems. For instance, in August 2018, Nabors Industries Ltd., one of the leading oil and gas drilling contractor in North America, offered blowout preventer (BOP) testing services for its major customers in the Powder River Basin of Wyoming. Such factors are expected to aid in growth of testing services segment in the U.S. BOP testing market during the forecast period.

Thus, key players are focusing on offering repair and maintenance services for blowout preventer testing to maintain high performance standards. For instance, Nabors Industries Ltd., an oil and gas drilling contractor based in North America, offers blowout preventer testing services to ensure low probability of well control issues and downtime, and to protect the safety of the crew, the rig and the wellbore. Owing to such operational and monetary benefits, the repair and maintenance services segment of the U.S. BOP testing services market is expected to witness considerable growth during forecast.

What is the expected market size of U.S. BOP testing services market in 2028?

Based on application, which segment held the largest market share in the market in 2020?

The onshore segment held the largest market share among application in the market in 2020.

Which sub-region held the largest market share in the market in 2020?

Which are the key players operating in the market?