The Global LTE Market, By Technology (LTE –FDD, TD-LTE or LTE-TDD and LTE Advanced), By Components (Infrastructure, Chipsets, Terminal Equipments, LTE Testing Equipments and Network service providers), By Services and Applications (Mobile Cloud Services, M2M and Connected Devices, P2P messaging, Browsing, Public Safety LTE, Games, TV/Video-on-Demand, Music, M-commerce and VoLTE)by Region (North America, Europe, Asia Pacific and Rest of the World) - Global Forecast to 2027”, is expected to be valued at US$ 63,225.1 Million by 2027, exhibiting a CAGR of 78.6% during the forecast period (2020-2027), as highlighted in a report published by Coherent Market Insights.

The demand for smartphones has increased significantly in the recent past. According to Coherent Market Insights’ analysis, in 2013, global shipments for smartphones is expected to surpass 1 billion units. Rising usage of tablets and smartphones, along with consumers’ increased reliance on services and applications, has driven the demand for wireless technology that can offer higher speed, better QoS, and least latency. According to the Global mobile Suppliers Association, 97 manufacturers announced the launch of 821 LTE-enabled user devices by March 2013. In 2012, 474 new LTE user devices were launched. Smartphones constitute the largest category for LTE devices; about 261 smartphones were announced by March 2013. Therefore, these factors are expected to propel the global LTE market growth in the near future.

In the COVID-19 pandemic, people are spending more time on the social media platforms and internet surfing compared to 2019, according to CMI study in 2020. In addition to this, countries such as India and Spain have imposed nationwide lockdown. This resulted in the increase in the online ordering of food from platforms such as Zamto and Swiggy. Moreover, according the to the same analysis, generation z have spent about 2 hour weekly on high graphics mobile games in June 2020. The online gaming activities requires high speed internet connectivity such as LTE. Owing to all mentioned factors, the LTE market is expected to show significant growth in the LTE market.

Despite its numerous advantages, LTE adoption is facing numerous challenges. The initial deployment cost of LTE is significantly high as compared to 2G and 3G. As a result of this, the wide adoption of LTE is being hindered, especially in emerging regions such as Latin America, Middle East, and Africa. Hence, these factors are expected to hamper the global LTE market growth in the near future.

Customers require the same experience with broadband that they get at the office or home, regardless of location. They desire easy access and usage, high speed and little latency, better privacy and security, and seamless global mobility. Furthermore, music and video downloads, HD-movie downloads, and video conferencing, video-on-demand, and other trends are driving the need for 4G networks and their increased data capacity. Users today want to do more than simply consume information. They wish to create things and share them. These trends of data usage necessitate a high-speed and QoS wireless service and thus are the driving factors of demand for LTE.

Advent of cloud computing, smart device, and SaaS is another key trend in the market. New end devices are now generating 5 to 10 times more data from consumer and business users. The power of mobile end-user devices has been enhanced by a multitude of network-hosted information and applications. Several companies are looking at hosting private cloud networks with data and applications. As traffic has been shifting to public wireless infrastructures, mobile operators find opportunity in offering new services with a greater interest in Software-as-a-Service (SaaS). 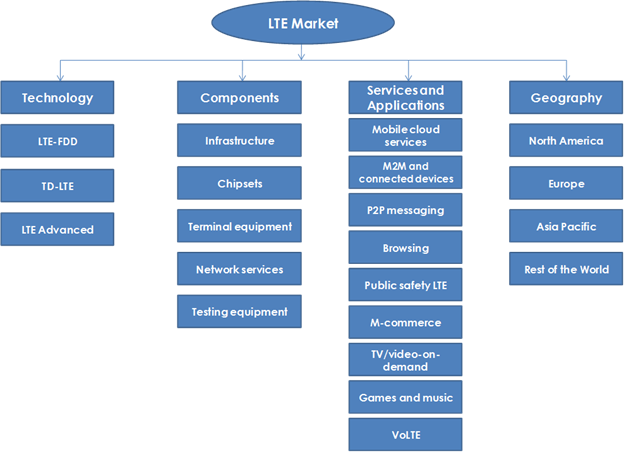 Struggle during sleep, waking up too early, and not being ...

Heterogeneous network (HetNet) is a combination of differe...

Electron beam (EB) based coating is commonly used in the m...

Potato chips is a popular snack that is consumed across th...

Savory snacks are made using staple raw materials such as ...

Blood clot is usually a response to the injury so as to pr...

Bottled water is packaged and processed water for consumpt...