The global aerospace foams market size was valued at USD 4,725.07 million in 2021 and is anticipated to witness a compound annual growth rate (CAGR) of 6.14 % from 2022 to 2030. The Aerospace Foams market is expected to witness robust growth over the coming years. Major driving factors include rising defense spending, rapid urbanization, and growing demand for comfort in civil aircrafts. Also, the emergence of low-cost aircraft manufacturers is expected to create new market opportunities for the industry.

Asia Pacific is expected to hold second leading position in the global aerospace foams market over the forecast period and this is attributed to the presence of strong economies like China and India. The Association of Southeast Asian Nations (ASEAN) includes Thailand, Indonesia, Vietnam, Philippines, Malaysia, Singapore, Myanmar, Cambodia, Laos, and Brunei. The GDP of the ASEAN region is estimated to reach 4.9% in 2021, according to the International Monetary Fund forecasts. 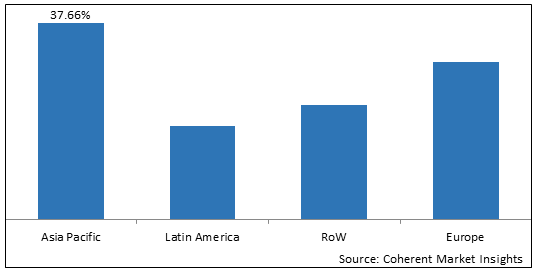 Growing demand for lightweight and fuel-efficient aircraft is driving growth of the global aerospace foams market. Due to its high strength-to-weight ratios compared to metals, foam minimizes the overall weight, thus further reducing the aviation fuel consumption, allowing the aircraft to fly farther and carry more passengers. These foams are lightweight and are used to fabricate cabin walls, and ceilings, seats, floor carpets, overhead stow bins, flight deck pads, among other parts of aircrafts. According to the Airbus SAS, Airbus, in its commercial jetliner, A350 XWB, has comprised aircraft’s wing of the lightweight carbon fiber-based foam material, including its upper and lower covers.

Rapid growth of commercial aviation market is again augmenting market growth. According to the Coherent Market Insights analysis, the global commercial aerospace market was valued to be USD 865 million in 2019 and USD 690 million in 2020, even after being impacted by the COVID-19 crisis. Moreover, the global commercial fleet is forecasted to witness an annual growth rate of over 3%, with the total active fleet expected to reach around 48,500 by 2037.

Advent of bio-based foams is projected to provide significant growth opportunities over the forecast period. Bio-based foams are derived from eco-friendly sources such as soybean oil, microalgae, palm oil, castor oil, and others. These foams are rapidly replacing conventional synthetic polyol-based PU foams due to growing environmental concerns.

Growing adoption of partnership and agreements among key players is expected to serve major growth opportunities for key players in the near future. For instance, in February 2021, GE Aviation and Etihad Airways have partnered to launch GE’s 360 Foam Wash, a groundbreaking jet engine cleaning system, to optimise performance of Etihad’s GE90 and GEnx-1B engines on its Boeing 777 and 787 fleets.

Growing trend of private travel as the number of high-net worth persons and ultra-high net worth individual have increased worldwide. This has resultant in delivery of helicopters and business jets with improved cabin interiors.

Growing number of acquisition and merger among key players for geographical expansion is rising trend. For instance, in June 2021, Diab Group announced the acquisition of ULTEM foam production line from SABIC. It will incorporate the ULTEM resin-based foam into its current portfolio under the name Divinycell U, and will further the development of the resin- based foam with support from SABIC.

Disposable and recycling issue associated with the PU foam is again expected to hinder the market growth of the market.

The global aerospace foams market report is segmented into type, application, and geography

Based on type, the market is segmented into Polyurethane, Polyimide, Metal Foams, Melamine, Polyethylene, and Other Types. Out of which, Polyurethane is expected to dominate the global market over the forecast period as they are low-cost and long-lasting materials for airplanes. Moreover, PU can adjust to a variety of environments that most other materials cannot.

Polyimide segment is also expected to witness significant growth in the near future and this is owing to the fact that they are sound, heat, and cold insulating foam. They are perfect and effective for aerospace industry.

Business and General Aviation segment is also expected to witness significant growth in the near future owing to the rapid growth of travel and tourism industry.

In June 2021, Diab Group announced the acquisition of ULTEM foam production line from SABIC. It will incorporate the ULTEM resin-based foam into its current portfolio under the name Divinycell U, and will further the development of the resin- based foam with support from SABIC.

In April 2020, Greiner AG acquired Eurofoam, a manufacturer of flexible polyurethane foams in Central and Eastern Europe. It now increases its share from 50% to 100% in the joint venture with Reciticel SA.

*Definition: Aerospace foams are cellular-structured materials that are used in the manufacturing of many different products. They are typically used for vibration dampening, cushioning, and insulating. They are lightweight, durable, and can be used in a variety of applications, including aircraft seats, cabin walls, and overhead bins.

The aerospace foams market is primarily driven by the demand for commercial aircraft. The market for aerospace foams is growing due to the rapid technological development in the aerospace industry. Commercial aircraft rely on insulating and lightweight foams to provide a comfortable flying environment. Some of the leading aerospace companies are developing new and innovative products which is again fostering market growth. For example, in September 2022, INOYQX, a Chinese manufacturer of melamine foam, has launched a new product called Bonded Foam. This type of foam has excellent acoustic and vibration dampening properties.

On the other hand, strict regulation on the usage of PU foams is projected to hinder the market growth.

Growing demand for lightweight and fuel-efficient aircraft and rapid growth of commercial aviation market are fuelling the market.

The Commercial Aviation Application segment is the leading component segment in the market.

Strict regulations on the usage of PU foams and disposable and recycling issues associated with the PU foam are the major factors restraining the market.