Alagille Syndrome Treatment Market to Surpass US$ 948.7 Million by 2027

Alagille syndrome (ALGS) is a rare, genetic condition that can affect different parts of the body including liver, heart, kidneys, eyes, face, and bones. Moreover, liver problems results from having fewer small bile ducts than normal in the liver. This leads to bile building-up inside the liver, which in turn causes liver scarring and damage. This condition can be referred to as Alagille-Watson syndrome, arteriohepatic dysplasia (AHD), cardiovertebral syndrome or syndromic bile duct paucity.

The COVID-19 virus outbreak has spread across the globe and it has created profound disruption across communities, patients, and clinicians. The drug development process is facing profound disruption, as the lab specialists adjust to remote work environments and lab capacity is reduced. Clinical trials for drugs are also severely affected with disruptions in both new enrollment and in existing patients on therapies. According to the clinicaltrial.gov, as of April 2020, there were over 2,850 trials and around 900,000 patients enrolled at trial sites in regions that were in partial or complete lockdown due to COVID-19 restrictions. The R&D labs are operating at below 50% of normal capacity. 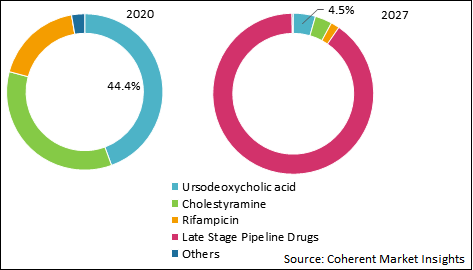 Major players in the market are focusing on developing new drug compounds for the treatment of Alagille syndrome, which are under clinical trials and are expected to receive approval form USFDA in the near future. Thus, the robust pipeline of drugs for Alagille syndrome treatment is expected to significantly contribute to growth of the global Alagille syndrome treatment market over the forecast period. For instance, on September 1, 2020, Mirum Pharmaceuticals, Inc., a biopharmaceutical company focusing on the development and commercialization of novel therapies for debilitating liver diseases, announced to submit the first portion of its rolling New Drug Application (NDA) to the U.S. Food and Drug Administration (FDA) for maralixibat. Maralixibat is a novel, minimally absorbed, orally administered apical sodium dependent bile acid transporter (ASBT) inhibitor being evaluated for the treatment of cholestatic pruritus in patients with Alagille syndrome (ALGS). Mirum expects to complete the NDA submission in the first quarter of 2021.

Furthermore, increasing funding and investments for the treatment of Alagille syndrome is expected to drive the global Alagille syndrome treatment market growth. For instance, on December 14, 2020, Mirum Pharmaceuticals Inc. announced that they will receive around US$ 210 million funding from Oberland Capital Management LLC for its experimental liver disease drug maralixibat. The sum is split between US$ 200 million under a revenue-based funding agreement and US$ 10 million under an equity investment agreement signed between the companies. Mirum Pharmaceuticals Inc. is expected to initially receive US$ 60 million, including the US$ 10 million equity investment, by December 31, 2020. Oberland will release US$ 65 million upon the acceptance of the company U.S. FDA NDA application for maralixibat.

Among regions, North America is expected to hold dominant position in the global alagille syndrome treatment market over the forecast period, owing to the presence of major market players such as Mirum Pharmaceuticals, Albireo Pharma, Inc., and others. Moreover, increasing partnerships and collaborations by market players are expected to drive the market growth. For instance, on October 15, 2020, Mirum Pharmaceuticals entered into a partnership with EVERSANA, an independent provider of services to the lifescience industry for the commercialization and distribution of Maralixibat, indicated for the treatment of alagille syndrome, in the U.S.

In addition, Asia Pacific Alagille syndrome treatment market is expected to witness significant growth during the forecast period, owing to various programs launched by market players for commercialization of their products, which is expected to drive the Asia Pacific Alagille syndrome treatment market growth over the forecast period. For instance, on November 5, 2020, Mirum Pharmaceuticals announced extention of Expanded Access Program (EAP) in Australia for maralixibat, indicated for the treatment of patients suffering with cholestatic pruritus associated with Alagille syndrome (ALGS). 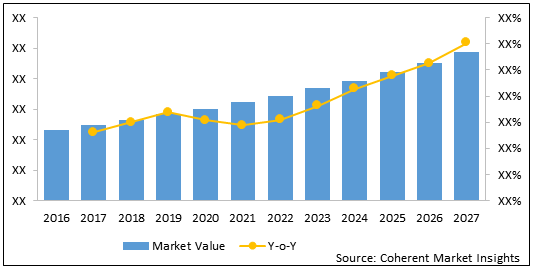 Alagille syndrome is a genetic disorder, in which a person have fewer bile ducts than normal in liver. Alagille syndrome can be passed from parent to child or can happen naturally. Alagille syndrome not only affects the liver, it can also cause skin, heart, facial, kidney, and eye abnormalities. While there is no known cure for Alagille syndrome, there are treatments that can help control the symptoms. Possible treatments may include medications such as Ursodeoxycholic acid, Cholestyramine, and Rifampicin that increases the flow of bile and careful management of diet to minimize nutrition and vitamin related problems. In severe cases, a liver transplant may be necessary.

Several pharmaceutical companies manufacture drugs to control the symptoms such as Teva Pharmaceutical Industries Ltd., AbbVie, Inc., Glenmark Pharmaceuticals and others. There are two drugs under the clinical trials that have the potential to treat Alagille syndrome more effectively than other medications. The two drugs are Odevixibat and Maralixibat. Furthermore, the U.S. FDA is providing support to the manufacturers by giving orphan drug designation or breakthrough designation to the new drugs.

However, lack of novel therapies is expected to restrain the Alagille syndrome treatment market growth. For instance, according to the National Organization for Rare Disorders, Alagille syndrome is caused by mutations in one of two genes – the JAG1 gene or the NOTCH2 gene. Mutations of the JAG1 gene have been identified in over 88% of cases of Alagille syndrome. Mutations in the NOTCH2 gene account for less than 1% of cases. These mutations are inherited in an autosomal dominant pattern, and finding cure for genetic disorders require extensive R&D, which is often not achieved.

Alagille syndrome treatment market is expected to exhibit a CAGR of 45.2% during the forecast period (2020-2027).

What is the estimated market size of the Alagille syndrome treatment market in 2020?

What are the growth estimates for the market till 2027?

Which is the major region in the market?

North America is the major region in the market.

The robust pipeline for alagille syndrome and increasing investments and funding for research are expected to drive growth of the market.

Canine atopic dermatitis (AD) has been defined as a geneti...

Addiction is a condition of harmful craving to repeatedly ...

Radiation and radioactive compounds play a crucial role in...

Alopecia is a common autoimmune disorder that causes hair ...

Erectile dysfunction is the inability to reach or to maint...