Additives are natural or chemical substances added to preserve or improve the quality of food or a product. Feed additives are additives, specifically used in animal nutrition, to enhance the feed quality and digestibility in order to prevent diseases and improve quality of meat or food obtained from animals.

Farm animals are provided with a variety of additives such as sensory additives, nutritional additives, zootechnical additives, and coccidiostats and histomonostats. Sensory additives help stimulate the appetite of animals, allowing them to eat more, while nutritional additives provide specific nutrients to nutrient-deficient animals. Zootechnical additives are added to the feed to improve health and performance of animals, and coccidiostats and histomonostats are antibiotics used to prevent bacterial and microbial growth in the feed. Stringent regulations by the European commission have banned the use of coccidiostats and histomonostats, replacing them with probiotic alternatives. Regulation (EC) No 1831/2003 of the European Parliament and of the Council on additives for use in animal nutrition, banned coccidiostat on December 31, 2012. This has prompted various developments to find natural alternatives to coccidiostats in histomonodial and anticoccidial drugs, which help control Eimeria infections. Some of the recent discoveries are the use of vaccines and other alternatives such as sulfonamide, nicarbazin, and amprolium. Unattenuated vaccines such as Coccivac, Advent, Immucox, and Inovocox, and attenuated vaccines such as Paracox and HatchPak CocciIII are widely used. Consumption of livestock such as poultry, swine, and cattle is growing as it constitutes a protein rich diet. This is expected to drive growth of the global animal feed additives market in the near future. Feed additives are increasingly being used to meet the nutritional levels required for metabolism that enables weight gain of the animal, and prevents consumers from diseases such as bird flu and swine flu. This, in turn is a driving factor for the global animal feed additives market growth.

In terms of revenue, Europe, followed by Asia Pacific and North America, respectively, accounted for a major share in the global animal feed additives market in terms of revenue, in 2021 and the trend is estimated to remain the same over the forecast period. In 2021, Western Europe held a share of 27.0% in terms of revenue, followed by North America (23.1%). Growing consumer knowledge about quality meat and protein intake in Asia Pacific due to rising consumer awareness coupled with meat industry, is expected to drive growth of the global animal feed additives market over the forecast period. The enzymes segment in the global animal feed additives market is expected to witness a CAGR of 2.9% from 2022 to 2030. 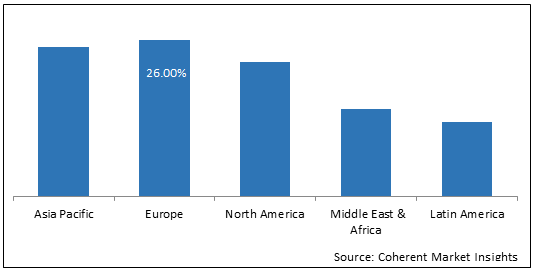 Animal feed additives labelled 'organic' are specifically used by livestock. To maintain necessary amount of nutrients in the animal feeds a regulatory body was formed, the United States Department of Agriculture, Code (592) Feed Management. They regulated provisions not to exceed the quantity of nitrogen and phosphorus nutrients supply required by livestock and poultry for maintenance, production, performance, and reproduction. The normal bird feeds have insufficient amount of methionine, a proteinogen amino acid required for feather growth in birds, therefore synthetic methionine is added to ensure proper feathering of birds. The United States Department of Agriculture (USDA) advised against the use of ‘organic’ labelling in the poultry feeding on synthetic methionine. A new rule was formulated by the United States Department of Agriculture USDA which strictly asked manufacturers to reduce the standard limit of synthetic methionine in organic poultry. A list of registered products that could be permitted as additives in animal nutrition is issued by European Union and Switzerland. They include: a) substances as antioxidative effects, b) emulsifiers, stabilizers (organic acids), c) coloring substances, d) probiotics, e) enzyme mixtures, f) performance promoters (only antibiotics, others banned since 1st January 1999), g) vitamins and provitamins, and h) trace elements.

Asia Pacific is expected to be the most lucrative market during the forecast period, due to increase in grain demand for food production with low availability of land and water resources, which has resulted in growth of the meat industry, which is expected to affect the animal feed additive in the global market. Feed additive acts as a catalyst, which prevents diseases in animals and improves the vitamin intake, weight gain, digestion, and enhances the quality of meat. Owing to these factors and to control diseases such as avian influenza and bird flu, the addition of feed additives is expected to drive the global animal feed additive market over the forecast period. 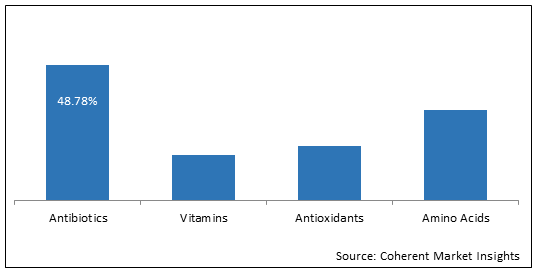 Feed additives are supplements that are added in feed of livestock to improve the nutritional level of the farm animals. Feed additives contain amino acids, fatty acids, minerals, and vitamins which helps in growth of the animals at a healthy rate. The nutritional level of the animal feed depends on its nutritional content and also depends upon other factors such as hygiene, digestibility, feed presentation, and effect on colonic health. Farm animals’ diet consist of maize, soybean, and wheat along with high quality feed, which should contain carbohydrates, fats and proteins in particular. Increasing consumer knowledge on animal feed and prevention against diseases caused by meat consumption such as bird flu, etc. and growing meat industry in Asia Pacific and Europe is the key factor for growth of the global animal feed additives market during 2022-2030. The animal feed additive market is expected to expand at a CAGR of 2.9% during the forecast period.

Asia Pacific is expected to show a significant growth in 2021 and the trend is expected to remain the same during 2022-2030. Increasing demand for feed additives due to rise in demand for white meat, farmers awareness and increase in livestock industrialization over last decade, is the major driving force to position Asia Pacific as one of the largest region in the global animal feed additive market. Increase in urban population coupled with healthcare awareness is gaining traction for high quality protein from meat and increasing consumption of aquatic and meat products. These are some of the factors which are expected to create opportunities for major market players and drive the animal feed additive market during the forecast period. Western Europe market is also expected to experience significant growth and is projected to exhibit a CAGR of 2.6%, during the forecast period.

What was the global animal feed additives market size in 2021?

Rising consumption of livestock such as poultry, swine, and cattle is growing as it constitutes a protein rich diet, which is one of the major factors that is expected to propel growth of market over the forecast period.

Feed additives are increasingly being used to meet the nutritional levels required for metabolism that enables weight gain of the animal, and prevents consumers from diseases such as bird flu and swine flu. This, in turn is a driving factor for the market growth.

The market is largely regulated by various government bodies and this is one of the major factors that is expected to hamper growth of market over the forecast period.