The global anti-drone market size was valued at USD 914.21 million in 2021 and is anticipated to witness a compound annual growth rate (CAGR) of 27.8% from 2022 to 2030. Increased awareness of unauthorized drone usage and growing concerns over terrorism have spurred the anti-drones market. As anti-drone technology continues to advance, the market is expected to grow rapidly. In the next few years, these systems are expected to be used more in the military and defense sector. Due to the proliferation of illegal drone activities, governments and businesses all over the world are adopting anti-drone systems to combat such threats, which is driving the market growth.

North America among regions is anticipated to dominate the global anti-drone market over the forecast period. This is due to rise in investment in defensive platforms to jam or eliminate rogue drones, as arm forces of the U.S. classifies small drones armed with guns or explosive as a potential threat. For instance, in January 2019, the U.S. Pentagon’s new Counter-Small Unmanned Aircraft Systems Strategy described the framework to address the risks posed by hostile drones by creating general architecture solutions for information-sharing, establishing joint protocols in military departments, and synchronizing investments in major technologies.

Furthermore, Asia Pacific is also anticipated to witness strong growth in the global anti-drone market over the forecast period. This growth can be attributed to growing budget for defense in China and its degradation of political relations with India, the U.S. and other countries, and increasing cross-border conflicts as well as terrorist activities in India. For instance, in June 2021, India faced the first drone attack on the disputed region of Jammu and Kashmir. 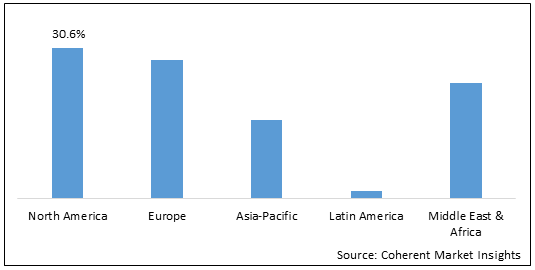 Increasing incidences of security breaches by hidden drones are expected to propel growth of the global anti-drone market over the forecast period. In past few years, the unmanned aerial systems have developed significantly. Drones were initially adopted in the defense sector; however, in recent years, these technologies are being used in civil applications such as for delivery services, urban mobility, and more. Drones are considered peers to non-state actors and terrorists in their tactics and operation concepts, which challenges the air defense systems.  Terrorists are using recreational and consumer UAS for planning and executing attacks. For instance, in August 2021, an airport in southwestern Saudi Arabia witnessed a bomb-laden drone attack that injured eight people and damaged a civilian plane.

Moreover, increasing adoption as well as development of anti-drone systems is also projected to augment growth of the global anti-drone market over the forecast period. Anti-drone systems assist in detecting or intercepting unwanted drones. Hostile drones could be used for deploying explosive, gathering information or smuggling contraband. Due to proliferation of low-cost unmanned aerial vehicles, these incidents are increasing around the world leading to increasing adoption and deployment for protecting the important infrastructure and public spaces.

Growing focus of manufacturers on development of novel technology is expected to offer various growth opportunities in the global anti-drone market over the forecast period. The rise in adoption of unauthorized flying test devices is leading to increased threats to national security around the world. Unmanned aerial vehicles consist various sensors for recording audio and video regardless of the place and time. Manufacturers are now focusing on development of new technology for reduction of UAV to limit drone aviation. Thus, it is likely to offer a lucrative growth environment to the market.

Furthermore, growing focus of manufacturers on increasing their production capacity is also likely to create various growth opportunities in the global anti-drone market over the forecast period. Companies are focusing on increasing production capacities to cater the demand for anti-drone programs. Governments and organizations around the world are investing in the development as well as marketing of anti-drone technology to address threats coming from unmanned aerial vehicles and small drones, which is expected to support the market growth.

Increasing spending in defense sector in Europe is gaining traction in the global anti-drone market. Poland, Spain, the Netherlands, Italy and Russia are some of the countries in the region that majorly spend on defense sector. These countries witnessed a significant growth in defense expenditure in 2021. As per the Stockholm International Peace Research Institute, the military expenditure of Russia increased by 2.9% in 2021, from US$ 61.7 billion in 2020 to US$ 65.9 billion in 2021.

The defense segment is gaining traction in the global anti-drone market. The segment is anticipated to witness highest share in the market due to growing adoption of anti-UAV programs in international security forces. Due to increasing terrorist and illegal activities around the world, such as border crossing, unlawful smuggling is leading to growing adoption of C-UAVs in defense segment. This trend is likely to continue in the market during the forecast period.

Due to low level of technical readiness, the systems are not being adopted in large scale in urban or civil environments and this is expected to hamper growth of the global anti-drone market over the forecast period. As anti-drone systems are new, there are many challenges related to their adoption in various conditions. Defense sector around the world has been adopting the various anti-drone technologies and many countries are conducting evaluations of other systems for use in critical environments. Thus, technological challenges such as lower technical readiness of these systems are hampering the market growth. 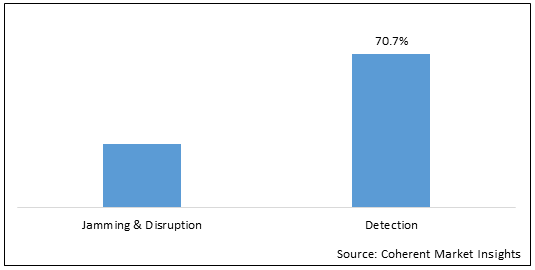 The global anti-drone market report is segmented into Application, Vertical and Geography.

Based on Application, the market is segmented into Detection and Jamming and Disruption. Out of which, Detection segment is expected to dominate the global market over the forecast period and this is attributed to the growing demand for radars resulting from increasing requirement for better surveillance systems in countries with international military conflicts such as India. For instance, in June 2021, the Defense Research and Development Organization (DRDO) of India revealed its new anti-drone technology that detects and eliminates UAVs through its radar system having 360-degree coverage.

Jamming and Disruption segment is also expected to witness significant growth in the near future and this is owing to the growing deployment of drone repellant systems for enhancing protection, as the drone intrusion incidents are increasing at the borders. For instance, in July 2021, the Indian Air Force (IAF) announced that it will be procuring anti-drone systems for stopping drone attacks in the country’s border regions, after the attack on the Jammu Air Force Station in June 2021.

Based on Vertical, the market is segmented into Defense, Airports and Other Critical Structures. Out of which, Defense segment is expected to dominate the global market over the forecast period and this is attributed to growing defense budgets all over the world. The increasing emergence of threats of armed drone leading to growing demand for sophisticated counter-unmanned aerial vehicles for identifying and tracking and disabling as well as locating the operator. Thus, the defense budgets are increasing around the world. For instance, in FY 2022, the U.S. DoD planned to spend US$ 636 million on research and development of C-UAV systems and nearly US$ 75 million for procuring such systems.

Airport segment is also expected to witness significant growth in the near future and this is owing to the growing adoption of anti-drone systems by airports across the world for protecting their commercial trade aircraft from collisions with unauthorized flying objects such as drones. In October 2019, the Ottawa International Airport in partnership with Nav Canada, began a pilot program of a year for testing novel drone detection technology in order to tackle threats posed by UAVs proliferation in restricted regions.

In August 2021, DeTect Inc. opened an office in Beijing, China to support the systems that are delivered to the manufacturing and completion center of the country in the Hebei province, which is located near the Zhengding County.

In February 2022, a critical infrastructure federal agency in the U.S. gave an order of a portable drone defeat system to DroneShield Ltd.

The global anti-drone market is highly competitive. This is attributed to continuous launch of new technologies due to ongoing R &D and efforts by value chain participants. Moreover, key players are adopting various business growth strategies in order to expand their presence on regional as well as global basis.

Along with reducing the risk of aerial attacks, anti-drone technology is an effective way to protect critical infrastructures and airports. It also helps identify drone operators. Consequently, a multi-layered approach to drone detection is critical.

Anti-drone systems are vital in protecting our nation and preventing uncontrolled aerial vehicles. A well-developed anti-drone system can detect any type of drone and protect people and property from unlawful activities. With drones becoming more common and dangerous, the need for counter-drone technology is increasing. These systems are important for security of a country.

Increased spending by governments around the world on the defense sector, increasing developments in anti-drone systems, growing security breach incidences, and growing adoption of counter drones are the factor expected to boost growth of the global anti-drone market over the forecast period. Furthermore, rise in development of versatile and scalable anti-drone systems is anticipated to create several growth opportunities in the market.

However, factors such as high cost of R&D investments and increasing public safety concerns are the major factors likely to impede growth of the global anti-drone market over the forecast period.

Increasing incidences of security breaches by hidden drones is fuelling the growth of the market.

The Dtection segment is the leading component segment in the market.

High cost of low level of technical readiness are the major factors restraining growth of the market.