Malaria has affected the tropical regions in the world including Africa and Asia, Central and South America, Haiti and the Dominican Republic, some parts of Middle East, and some Pacific islands. The increasing cases of traveler’s malaria is one of the factors contributing to growth of the market. Every year, thousands of people worldwide travel to such malaria affected regions, which is expected to increase the risk of infection. For instance, according to Global Health, Division of Parasitic Diseases and Malaria, and (CDC), each year, around 2,000 cases of malaria are diagnosed in the U.S. To avoid the increasing number of patient pool and to reduce the risk of traveler’s malaria, travelers are being advised by the regulatory authorities to have the antimalarial medicines with them.

Increasing research and development activities, in order to develop novel treatment approach and collaboration among the key players are expected to drive the market growth

Medicines for Malaria Venture (MMV) is a not-for-profit public-private partnership, which was established in 1999, with an aim to reduce the burden of malaria in disease-endemic countries by developing novel treatment options. Many of the key pharmaceutical companies have been collaborating with MMV in order to develop novel drug entity for the treatment of malaria. For instance, in December 2019, Ipca Laboratories entered into a collaboration agreement with Medicines for Malaria Venture to develop a novel antimalarial co-formulation, Atoguanil, a combination of atovaquone and proguanil.

Moreover, rising funding by regional governments is significantly contributing to growth of the global anti-malaria drugs market. These funding are expected to give opportunity for research institutes such as Medicines for Malaria Venture, in order to continue the research studies for potential lead candidates targeting malaria. For instance, in November 2017, United States Agency for International Development (USAID) granted funding of US$ 9 million to Medicines for Malaria Venture for 5 years to conduct the three project including pharmacovigilance study of Pyramax (pyronaridine-artesunate), SERC Phase III study to develop a single-exposure radical cure, and to study the efficacy of DSM265, a potential single-exposure radical cure.

Most of the anti-malaria drugs are associated with severe side effects, which is expected to decrease demand for these drugs. For instance, Mefloquine may lead to nausea, vomiting, abdominal pain, headache, insomnia, and vivid dreams. Some other side effects such as dizziness, loss of balance, acute anxiety, depression, restlessness, confusion, and others are also associated with Mefloquine. Such factors are expected to hamper the market growth.

Among regions, Africa is expected to hold a dominant position in the market, owing to increasing risk of malaria in the region. For instance, according to the WHO, around 92% of malaria cases in the world occurs in the Sub- Saharan African region. WHO also estimated that, in 2017, among the five countries, which were accounted for nearly half of all malaria cases worldwide, 4 countries were from Africa region including Nigeria (25%), Democratic Republic of Congo (11%), Mozambique (5%), and Uganda (4%).

Moreover, Asia Pacific anti-malarial drugs market is expected to exhibit significant growth over the forecast period, owing to increasing regulatory approval of the products, and presence of major pharmaceutical companies such as Ipca Laboratories, Zydus Cadila, Ranbaxy, and others in the emerging economies in Asia Pacific region including India, China, and others. 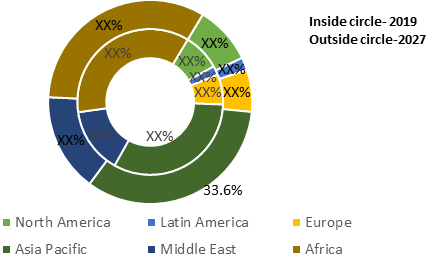 Malaria is common infectious disease caused by the protozoan parasite, Plasmodium parasites. The bite of an infected female Anopheles mosquito transmits a parasite to the person’s body, which then enters into the person’s liver where the production of parasite occurs. Human malaria are generally caused by five types of plasmodium parasites, including P. falciparum, P. malariae, P. ovale, P. vivax, and P.knowlesi. Among these, P. falciparum and P. vivax are the most dangerous species of parasite causing highest number of malaria mortality. Early diagnosis and efficient treatment are crucial measures to control malaria. Different types of drugs such as quinine, chloroquine, mefloquine, proguanil, primaquine, and others are used in the treatment of malaria. Moreover, some combination drugs such as Pyrimethamine & sulfadoxine, Artemether & lumefantrine, and others are also prescribed for treating the disease. According to the World Health Organization (WHO), around 91 countries and territories are at the risk of malaria transmission.

Malaria is considered as a life-threatening disease affecting large number of population across the world. According to the World Health Organization (WHO), in 2018, around 228 million estimated cases of malaria were diagnosed, globally. Moreover, global death toll due to malaria reached 405,000 in 2018 and an estimated 219 million cases were diagnosed in 2017. Sub-Saharan Africa is the most affected region due to malaria and according to WHO estimation, the region accounted for 93% of malaria cases among all the global cases. Thus, the increasing incidence of malaria in the world is expected to drive growth of the anti-malaria drugs market during the forecast period.

Moreover, various pharmaceutical companies are actively participating in research and development activities, in order to develop novel drug entity for treatment of malaria. For instance, in November 2017, Novartis Pharmaceuticals initiated phase 2 clinical trial to study the safety of the maximum dose of the investigational drug KAE609 in adult patients with uncomplicated malaria. The study is estimated to be completed in April 30, 2020. Such, increasing number of lead candidates is expected to contribute to growth of the global anti-malaria drugs market in the near future.

What is the scope of the report?

What are the key segments in the market?

Key segments covered in the report include: o By Drug Class o By Route of Administration o By Distribution Channel o By Region

What are the major market dynamics for the Global Anti-malaria Drugs Market?

What are the major market drivers for Anti-malaria Drugs Market?

Increasing product approval and launches by key players, increasing risk of travelers malaria, increasing prevalence of malaria in key regions such as Africa and Asia, and rising government initiatives to provide treatment to the malaria patients