Press Release: Australia Ammonia Market is expected to reach US$ 1,245.6 Million by the end of 2027

Ammonia is one of the most abundant nitrogen-containing compounds with formula NH3. It is a colorless gas with a distinct pungent odor and occurs naturally in the environment in the air, plant, soil, and animals including humans. In humans, the synthesis of ammonia takes place when the body breaks down food especially protein into amino acid and then converting the ammonia into urea. Household ammonia is commonly called ammonium hydroxide, it is an ingredient that is mainly used in various cleaning products for breaking down stains such as cooking grease and other stains.

Rising consumption of ammonia-based fertilizer in Australia to enhance the yield productivity to meet the growing demand for food. According to the Australian Bureau of Statistics Agricultural businesses in Western Australia continued to fertilize the largest areas of land with 19 million hectares reported in 2016-17 or 37% of Australia's total area of agricultural land fertilized. Both Western Australia and New South Wales (including the ACT) used the largest amounts of fertilizer during 2016-17 with both applying just over 1 million tons.

Among region, Western Australia region dominated the Australia ammonia market in 2018, accounting for 34.1% share in terms of value, followed by New South Wales and Queensland, respectively. 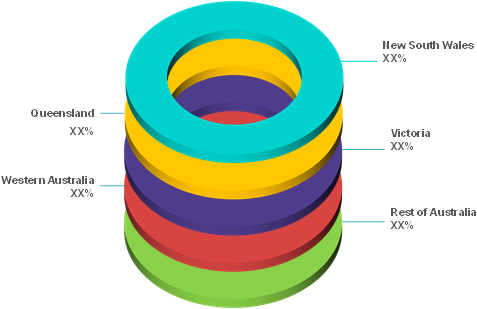 High dependency of the Australia agriculture industry on imports of fertilizer products from China and other countries is projected to impact the sales of ammonia for the production of fertilizers in the region. Moreover, variation in seasonal demand for fertilizers is also projected to lower the demand for ammonia, especially in Queensland and Victoria. Hence, the aforementioned factors are presumed to hinder the market growth of Australia ammonia over the forecast period.

Ammonia as a refrigerant has a major disadvantage due to its toxicity because of its hygroscopic nature, it spread to most areas of the body such as eyes, throat, and nose and may lead to severe burn injuries. Moreover, ammonia as a refrigerant may cause various skin and respiratory disorders on exposure. Hence, health issues associated with the exposure of ammonia as refrigerant is expected to hinder the Australia market growth over the forecast period.

The rising focus of the manufacturer of the Australia ammonia market to produce green ammonia in order to promote sustainability is expected to fuel market growth. For instance, in September 2019, on behalf of the Australian Government, the Australian Renewable Energy Agency (ARENA) has provided $1.9 million in funding to Queensland Nitrates Pty Ltd (QNP) to assess the feasibility of the construction and operation of a renewable ammonia plant at its existing facility near Moura in Central Queensland.

Increasing focus of politicians of Australia to export solar power using ammonia is expected to fuel the market growth of the Australia ammonia market. For instance, in October 2017, Yara’s Australian unit announced plans to build a pilot plant to produce ammonia using solar power. This is a key step in Australia’s efforts to develop its economy around clean energy exports and could lead to a new system of global trade in which renewable ammonia is an energy commodity.

Rising investment by the major manufacturer in Australia is expected to foster market growth over the forecast period. For instance, in October 2019, the Australian government will allocate US$ 1.93 million in financing for two studies seeking to explore the potential of using green hydrogen from wind and solar power electrolysis in the production of ammonia. Therefore, rising support of the Australian government in order to expand the application of ammonia is expected to fuel the market growth.

An increasing number of partnerships in the Australia region is projected to augment market growth over the forecast period. For instance, in November 2018, Australia’s Commonwealth Scientific and Industrial Research Organization (CSIRO) announced the formation of a partnership that will support the commercialization of CSIRO’s high-purity ammonia-to-hydrogen conversion technology. Therefore, the rising number of partnerships in the country is expected to fuel market growth. 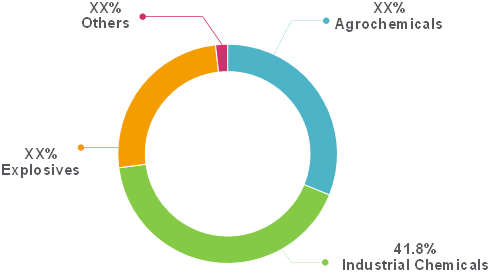 Ammonia is a gas produced from hydrocarbons. It is a common industrial chemical used in manufacturing of urea, urea formaldehyde resins, synthetic fibres, and as a building block in nitrogen fertilizers. The growth of end use industries such as agrochemicals, industrial chemicals, explosives, and others.

Among region, Western Australia accounted for the largest market share of 34.1%, in terms of revenue, followed by New South Wales and Queensland. Furthermore, New South Wales region is anticipated to record fastest growth of more than 7.0% during the forecast period (2019 to 2027).

What are the growth estimates for Australia ammonia market till 2027?

Which are the prominent Australia ammonia market players?

What are the key factors hampering growth of the Australia ammonia market?

High dependency of the Australia agriculture industry on imports of fertilizer products from China and other countries is one of the major factors that is expected to hamper growth of the market over the forecast period.

What are the key factors driving growth of the Australia ammonia market?

Rising consumption of ammonia-based fertilizer in Australia to enhance the yield productivity to meet the growing demand for food is one of the major factors that is expected to propel growth of the market over the forecast period.

What are the Australia ammonia market trends?

The rising number of acquisitions by market players in the country is one of the major trends that has been observed in the market.

Which region/country held the largest market share in the Australia ammonia market?

Among regions, Western Australia region held a dominant position in the Australia ammonia market in 2018, accounting for 34.1% share, in terms of value, followed by New South Wales and Queensland, respectively.