Ethyl acetate is a colorless liquid with a fruity smell. It is slightly soluble in water and soluble in most organic solvents such as alcohol, ether, and acetone. It is used as a solvent for wide range of applications across many industries such as food and beverages, pharmaceuticals, packaging, etc.

In pharmaceuticals industry ethyl acetate is used as a medium of extraction in concentration and purification of antibiotics. It is also used as an intermediate in the production of drugs such as sulphamethoxazole, rifampicin etc. Ethyl acetate-based solvent adhesives exhibit a stronger bond strength and a higher resistance to peeling. Owing to low cost, low toxicity, and pleasant odor it is primarily used as solvent or a diluent for applications such as nail varnish removal or an additive in cigarettes. Ethyl Acetate has applications as a solvent in inks for flexographic and rotogravure printing. Other applications of ethyl acetate include adhesives, cleaning fluids, coated papers, photographic films and plates, and artificial leather.

Ethyl acetate is a popular solvent used in the manufacturing of nitrocellulose lacquers, thinners, and varnishes. Due to its high dilution ratio with both aliphatic and aromatic diluents, it is highly preferred organic solvent exhibiting low toxicity.

Among end-use industries, food and beverages held the largest volume share in the global ethyl acetate market in 2017. Rising demand for food & beverages is expected to drive growth of the global ethyl acetate market. For instance, according to the Food Statistics Pocketbook 2016, by Department of Environment, Food and Rural Affairs- UK, the gross value added of the food sector (excluding agriculture) increased 4.1% in 2015, following a 2.0 % increase in 2014.

Besides packaging, trend of online food deliveries and e-retail business in the region, is projected to drive growth of ethyl acetate market in the Asia Pacific during the forecast period due to rising demand from food and beverages industry.

However, replacement of solvent based coating with water-borne coatings may hamper growth of the ethyl acetate market during the forecast period.

Asia Pacific has the over capacity of ethyl acetate whereas Europe and North America are dependent on imports to satisfy the domestic demand. 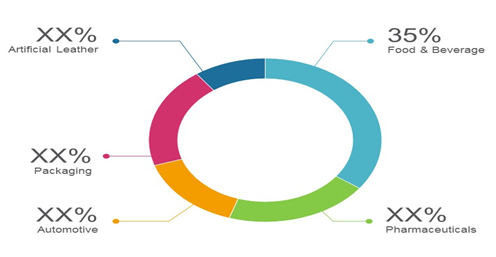 Ethyl acetate is a neutral colorless liquid with a faint, pleasantly fruity odor. It is miscible in all proportions with the common organic solvents. It is slightly soluble in water and soluble in most organic solvents such as ether, acetone, and alcohol. Stringent regulatory norms regarding natural leather production is driving growth of the market. Ethyl acetate is used in spread-coating compounds for artificial leather.

Among end-use industries, food and beverages segment held the largest revenue share of in global ethyl acetate market in 2017. Food & beverages industry is expected to gain traction during the forecast period, owing to properties of ethyl acetate such as colorless, fragrant, low-boiling solvent. It is primarily used as an aroma enhancer and flavoring agent in food & beverages.