Bioactive peptides are amino acids combined together through a covalent bond. Bioactive peptides are extracted from various natural sources, thereby providing a variety of health benefits such as better cardiovascular, digestive, endocrine functioning, as well as the immune and nervous system. They are also used in protecting important contents of food and beverages, resulting in decreased oxidation and degradation of the products. Although these peptides are extracted from natural sources, some of them have been designed with the help of chemical synthesis.

Increasing incidence of diseases like diabetes, cancer, and respiratory disorders is expected to drive growth of the global bioactive peptide market. According to the International Federation of Diabetes, 2017 report, around 425 million adults were suffering from diabetes globally, and the number is expected to reach 629 million by 2045.

According to a press release on September 2018 by the International Agency for Research on Cancer, the global cancer burden is estimated to have risen to 18.1 million new cases and 9.6 million deaths in 2018. Moreover, 1 in 5 men, and 1 in 6 women worldwide develop cancer during their lifetime, and 1 in 8 men, and 1 in 11 women die from the disease.

According to World Health Organization, 2017 statistics, an estimated 3.17 million incidences of chronic obstructive pulmonary disease (COPD) were recorded in 2015, which is COPD accounted for 5% of deaths globally in 2015. More than 90% of COPD incidences occur in low and middle income countries.

Innovations and products launches by market players is expected to drive growth of the bioactive peptides market during the forecast period. In November 2018, Nuritas Ltd., announced the commercial launch of Peptide which contains anti-inflammatory bioactive peptides. It was the first bioactive ingredient discovered and delivered through artificial intelligence. 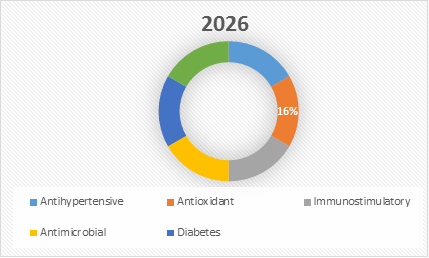 There has been increasing awareness among the populace regarding disease conditions, owing to initiatives and campaigns by government organizations, and increasing healthcare spending by government organizations are projected to drive growth of the global bioactive peptide market. According to Council for Responsible Nutrition (CRN) Washington, October 2018, Consumer Survey on Dietary Supplements, conducted by Ipsos Public Affairs found that 75% of U.S. adults take dietary supplements in 2018, compared to 65% in 2009.

The bioactive peptides are ingredients that provide nutritive value to the food by adding protein and other important nutrients. Bioactive peptides are gaining popularity owing to health benefits such as prevention and control of chronic disease conditions like cardiovascular disease, diabetes, cancer, and infectious diseases. Therefore, bioactive peptides used as treatment therapy for most of the functional disorders such as irritable bowel disease is expected to enhance the market growth.

What are the growth estimates for bioactive peptide market till 2026?

The global bioactive peptide market is estimated to surpass US$ 7,335.8

Which are the prominent bioactive peptide market players across the globe?

Which segment based on source, accounted for the highest demand in thebioactive peptide market?

Among source, plant segment accounted for higher market share in 2018, owing to rising demand for effective as well as quality products, combined with technological advancements.

What are the key factors driving growth of the bioactive peptide market?

Increasing incidence of chronic diseases such as diabetes, cancer, cardiovascular disease, chronic obstructive pulmonary disease (COPD), and others is one of the major factors that is expected to propel growth of the market over the forecast period.

What is the compound annual growth rate (CAGR) of the bioactive peptide market for next 8 years?

The global bioactive peptide market is estimated to exhibit a CAGR of 9.4% over the forecast period.

Which region held the largest market share in the bioactive peptide market?

Among regions, North Americaaccounted for major market share in the global bioactive peptide market in 2018 .

Peptide synthesis is a process of creating short sequences of polypeptides by adding one amino acid at a tim...