Bunker fuel is meant to be used by the shipping industry for fueling its marine fleet. Bunker fuel is classified into distillates and residual fuel oils. In general term, bunker fuel is any fuel that is burned in boiler or furnace for the generation of power in the engine.

The conversion of the current operating vessels into LNG-based vessels is highly expensive. Hence, it is not economically viable. However, the operational cost of LNG-based vessels is expected to be least among all the fuel alternatives, once the new emission regulations become applicable. Further, a gradual shift to LNG for propulsion is more advantageous, as compared to the traditional methods of fueling ships with heavy fuel oil, marine gas oil, marine diesel oil, etc. LNG-based propulsion reduces carbon footprint significantly and increases the ship’s operational efficiency.

Several refineries have reduced supply of petroleum coke due to refinery production cuts, falling consumption of gasoline and jet fuel amid the coronavirus pandemic. The prices of petroleum coke has fallen due to low crude oil prices. End-use industries can benefit from low petroleum coke prices and help to increase the profit margins of these companies. In March 2020, the Chinese Ministry of Finance offered tariff exemptions on U.S. petcoke imports as impact of COVID-19 affected domestic petcoke production in the country. According to Coherent Market Insights, petroleum coke market is expected to grow at a lower CAGR between 2020 and 2021.021.

Product innovation by key manufacture in marine fuel is a growing trend in the market and this is expected to augment the market growth of bunker fuel. For instance, in August 2019, Neste has announced the launch of low-sulfur marine fuels to help ships meet upcoming International Maritime Organization (IMO) regulations on sulfur dioxide emissions. Thus, product innovation by key manufacturers is expected to foster the market growth. 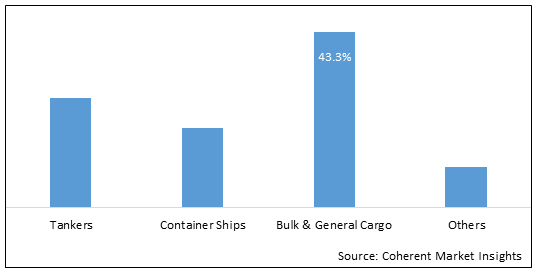 On the basis of vessel type in 2021, the bulk & general cargo segment has accounted the largest market share of 43.3% in terms of value, followed by tankers and container ships segment respectively.

In January 2022, Titan LNG, a leading, independent and physical LBM and LNG supplier gained the tender for the delivery of LNG in the Port of Marseille for Corsica Linea's new Ro-Pax LNG fueled ferry. This partnership indicates the expansion of Titan LNG's operation into the Mediterranean will enhance the availability of LNG, bioLNG, and in the longer run, hydrogen-derived LNG in the region

In November 2019, Neste, an oil refining and marketing company located in Espoo, Finland announced that the new IMO2020-compliant low-sulfur marine fuel is available in Germany. Neste and Germany-based BMT Bunker und Mineralöltransport GmbH have signed a partnership agreement regarding distribution and sales of Neste MarineTM 0.5. The new marine fuel, containing maximum 0.5% sulfur, has been available in Bremerhaven, Germany, since the beginning of November 2021.

Bunker fuel is also known as marine diesel or marine gasoil and is a final solid product obtained from oil refining. It is available in two forms: fuel grade and calcined grade. Power generation, construction, and metal industry are some of the major end-user of the bunker fuel. It is also used in the production of titanium and fertilizers.

Increasing focus of bunker providers to open bunkering facilities in ports that are near offshore hydrocarbon is acting as a catalyst in the growth of the bunker fuel market. Increase in offshore production and exploration activities is also expected to foster the market growth of the bunker fuel over the forecast period. Moreover, the growing development of LNG bunkering infrastructure is further anticipated to spur the market growth.

Strict regulation regarding usage of bunker fuel as these contain pollutants such as sulphur and nitrogen is expected to hinder the market growth.

What was the global bunker fuel market size in 2021?

Product innovation by key manufacture in marine fuel is a growing trend in the market and this is expected to augment the market.

What is the estimated CAGR for the market?