A central venous catheter is also known as central line or central venous line. It is a flexible tube, which is inserted into the vein below the right side of the collarbone and guided towards the large vein towards the heart, known as superior vena cava. A central venous catheter is used for administration of various fluids and these fluids can be easily injected into the body of the patients. The fluids include intravenous fluid, blood transfusions, and chemotherapy drugs. The Centers for Disease Control and Prevention (CDC) provided guidelines to prevent intravascular catheter-related infections in 2011, which were further updated in 2017. The guideline covers various important aspects, which are associated with central venous catheters such as appropriate training for healthcare personnel who insert intravascular catheters and the staff who are responsible for surveillance and selection of catheter and catheter application sites.

The COVID-19 pandemic is expected to limit growth of the global central venous catheter market over the forecast period. For instance, in June 2020, a study was published in the Current Oncology, a Canadian Cancer Research Journal, which assessed the impact of COVID-19 outbreak on Stage II and Stage III colon cancer patients who were taking adjuvant chemotherapy   treatment, in China. According to the study, the patients had to delay or modify their chemotherapy regimens during the COVID-19 outbreak due to the following reasons:

Moreover, the decrease in the number of blood transfusion is expected to hamper growth of the global central venous catheters market. For instance, in November 2021, an article was published in the journal, Transfusion Medicine and Hemotherapy, which stated that during COVID-19 pandemic, more challenges arose for blood transfusion as a result of lockdown, social distancing, and fear of blood virus transmission. Moreover, according to the same source, the elderly, who contributed most to the blood donations, were among the most vulnerable to the virus, resulting in lower donations from them. 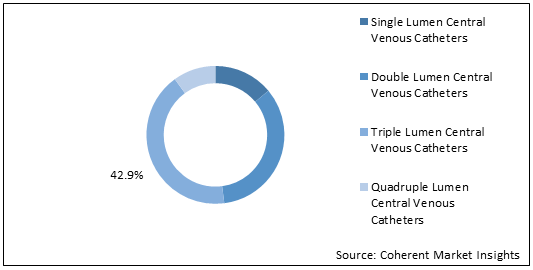 Regulatory authorities are providing guidelines to the market players regarding the classification of the central venous catheter and this is expected to drive growth of the market over the forecast period. For instance, in 2020, Bluegrass Vascular Technologies, a medical technology company, received De Novo classification order from the U.S. Food and Drug Administration (FDA) for its Surfacer Inside-Out Access Catheter System. The system is developed to obtain central venous access for catheter insertion into the central venous system for patients with upper body venous occlusions.

Market players are indulged in inorganic activities such as signing distribution agreements, which is expected to propel growth of the global central venous catheter market, over the forecast period

The increasing inorganic activities by the market players such as signing distribution agreements is expected to drive growth of the global central venous catheter market over the forecast period. For instance, in August 2021, ZOLL Medical and Wallaby Medical Technologies, a medical device company dedicated to stroke treatment, announced a distribution agreement, in which Wallaby will manage the sales and distribution of ZOLL's temperature management products in China. The Thermogard XP Intravascular Temperature Management System (IVTMTM) provides healthcare providers with the precision and speed associated with high-quality targeted temperature management (TTM), resulting in clinically demonstrated improvements in neurological outcomes among cardiac arrest survivors. The system includes a family of heat-exchange catheters that allow clinicians to manage core body temperature based on the patient’s needs.

Furthermore, Europe is also estimated to witness significant growth in the global central venous catheter market, owing to increasing inorganic activities by the market players such as partnerships and agreements. For instance, in March 2018, Bactiguard, a company developing catheters, announced that it entered into a distribution agreement with Ecomed Services NV, a distributor of medical devices in Belgium and the Netherlands, for the commercialization and distribution of Bactiguard products in the Netherlands and expanded its presence in Europe. 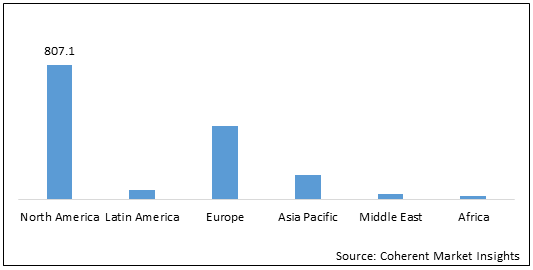 High prevalence of chronic diseases such as cancer, cardiovascular diseases, and chronic kidney disease (CKD) is propelling demand for treatment and care, using central venous catheterization, which in turn is expected to drive the market growth. According to the Centers for Disease Control and Prevention, heart disease is the leading cause of death in the U.S. According to the same source in 2021, around 659,000 people in the U.S. die from heart disease each year, which is 1 in every 4 deaths.

Development of a device such as central venous catheter, which could reduce time and steps required in central venous catheterization, and make the process much suitable in all kinds of situations is expected to provide a lucrative growth opportunity in the market. For instance, in 2019, an individual designer, ‘Gabriel Mueller’ from Germany developed a central venous catheter named ‘Cevec’ for emergencies such as unsteady surroundings, untrained users, and time pressure.

What will be the compound annual growth rate (CAGR) for the Global Central Venous Catheter market during the forecast period (2021-2028)?

The global central venous catheter market is expected to exhibit a CAGR of 6.2% during the forecast period (2021-2028).

What is the estimated market size of the market in 2021?

What are the growth estimates for the market till 2028?

North America is the prominent region in the market.

Which is the prominent segment among the product type segment, in the market?

Triple lumen central venous catheter, which belongs to the product type segment, is the prominent segment in the market.