North America among regions, is expected to dominate the global commercial aircraft market during the forecast period. This can be attributed to increasing expansion of global and domestic route networks in the region. For instance, in January 2021, Delta Airlines announced the launch of a new cargo route to Brussels. Similarly, the United Airlines also revealed its plans of expansion of global route network with a new, continuous service between Boston Logan International Airport and London Heathrow.

Moreover, Asia Pacific is also anticipated to witness robust growth in the global commercial aircraft market over the forecast period. This is due to predominant air passenger traffic, increasing expansion of fleet size to cater the high demand for air travel, and growing budget allocation for improvement of airport infrastructure as well as establishment of new airports in countries such as India in the region. However, due to COVID-19 outbreak, the market in Asia Pacific among several other regions was adversely impacted as there was a decline in air travel during this period. 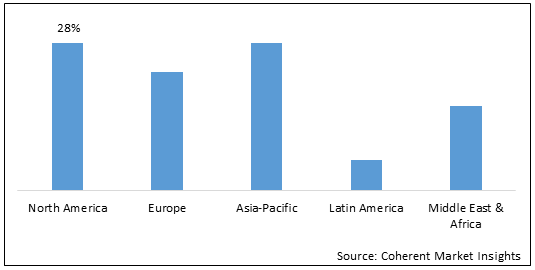 The number of revival orders and deliveries of aircrafts is increasing all over the world. This in turn is expected to propel growth of the global commercial aircraft market over the forecast period. Due to the COVID-19 pandemic, the air passenger traffic declined all over the world, and this resulted into postponement and cancellation of aircraft orders by several big airlines across the globe. However, during 2021, the air passenger traffic grew gradually in many regions, as vaccination programs were carried in various parts of the world, due to which the air travel regulations were alleviated. Thus, the number of revival orders and deliveries of aircrafts started increasing across the globe, driving the market growth.

Moreover, rise in new aircraft programs are also expected to augment growth of the global commercial aircraft market over the forecast period. Due to implementation of novel safety rules and emissions. The integration of sophisticated subsystems and new technologies on modern commercial aircraft is increasing. This is why, the demand as well as scope of collaborations between the upstream supply chains and aircraft OEMs is growing around the world. For instance, the Mitsubishi SpaceJet is a 70-90-seater, regional jet aircraft, which is manufactured through a partnership between Toyota Motor Corporation and Mitsubishi Heavy Industries.

Rise in investment in research and development activities of innovative technologies by aircraft OEMs is expected to offer growth opportunities for market players in the global commercial aircraft market over the forecast period. The increasing development in material technologies is likely to play an important role in the future, and manufacturers are focusing on production of next-generation aircraft with strong materials. The OEMs are primarily focusing on cost and weight, as two major factors. They are increasingly adopting additive manufacturing, which offers various advantages including reduced time to market, increased design flexibility, reduced material waste, and lower manufacturing costs. These research and development activities are providing market players with several growth strategies.

Furthermore, the increasing use of composites in new-generation aircrafts is also expected to create lucrative environment for growth strategies in the global commercial aircraft market over the forecast period. The composites are increasingly being used in newer generation commercial aircraft. They are being utilized in structural components, engines, interior components. The use of these composites is projected to grow significantly in future models of aircraft in the near future, which is likely to create growth opportunities for the market.

Increasing shift towards electric architecture of aircraft manufacturers is a major trend in the global commercial aircraft market. The aircraft manufacturing industry is adopting an electric architecture for different reasons. Electric and hybrid-driven approaches offer reduced aircraft emissions. As electric actuation systems have become weight-competitive for displacing the old hydraulic actuation systems, they are being increasingly adopted in different aircraft subassemblies. Thus, the trend of increasing focus on the futuristic zero-emission commercial aircraft concept continues to growth and is leading innovations in the market.

Moreover, growing demand for reduction of maintenance cost and improvement of operational efficiency from the airlines is also a growing trend in the global commercial aircraft market. The pressure of enhancing design and testing processes is increasing on manufacturers, which is leading to increased demand for cost reduction and improved operational efficiency. The use of advanced analytics technology and infusion of big data technology is likely to help in capturing and reusing the operational as well as maintenance data in real-time, which provides bigger insights. And thus, use of these technologies is increasing, which will help in reduction of operational and maintenance cost of aircraft significantly.

Growing number of cancellations or delays in aircraft delivery is anticipated to hamper growth of the global commercial aircraft market over the forecast period. Many airlines are reducing their overall losses, as most of the aircraft fleets were on the ground during the COVID-19 pandemic, while the fixed cost of the airlines continued to increase. This resulted in declined aircraft orders and cancellations of aircraft deliveries, which is a major challenge in the market.

Moreover, factors such as increased terrorism & lack of security, and congestion & delays in air traffic are also expected to impede growth of the global commercial aircraft market during the forecast period. For instance, according to the Bureau of Transportation Statistics, the United States Department of Transportation, the rate of delayed flights increased to 21.06% in 2022 from 15.84% in 2021 in the U.S. Thus, these factors are expected create challenges in the global commercial aircraft market in the future. 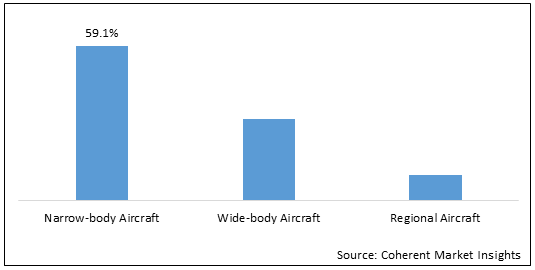 Wide-body segment is also expected to witness significant growth in the near future and this is owing to the rise in globalization of businesses and increasing international trade and transport. This could boost the demand of wide-body aircraft in the passenger and freighter aircraft segment.

Based on Engine Type, the market is segmented into Turbofan and Turboprop. Out of which, Turbofan segment is expected to dominate the global market over the forecast period and this is attributed to the wide adoption of turbofan engine due to various benefits offered by these engines such as allowing aircraft to accelerate quickly to a high speed, when the large fans rotate at higher speeds. The increasing demand for wide-body and narrow-body aircraft could affect the demand of turbofan engines.

Turboprop segment is also expected to witness significant growth in the near future and this is owing to the growing number of R&D activities to improve efficiency and simplify operations of turboprop engine. Turboprop engines offer high fuel efficiency due to their large bypass ratio. For instance, in June 2021, GE announced the first flight of Catalyst-a turboprop engine.

Freighter segment is also expected to witness significant growth in the near future and this is owing to the rapidly growing e-commerce activities all over the world. Freighter aircraft market depend mainly on air cargo movement, as well as e-commerce operations. For instance, as per the IATA, the air cargo represents more than 35% of the global trade value with over US$ 6.8 trillion annual air cargo value and less than 1% of global trade volume with airline transporting goods of more than 52 million metric tons per year.

In March 2021, Southwest Airlines announced that, it has placed an order of 100 Boeing 737 MAX family aircraft with an option for 155 additional aircraft. These deliveries are likely to be run through the year 2031.

The global commercial aircraft market is highly competitive. This is attributed to continuous launch of new technologies due to ongoing R &D and efforts by value chain participants. Moreover, key players are adopting various business growth strategies in order to expand their presence on regional as well as global basis.

A commercial aircraft is one that is operated for hire. This is different from private aviation, which involves personal use. It is used to transport passengers, goods, and passengers' luggage. The goal of commercial aviation is to provide safe and reliable transportation.

Commercial aviation involves the operation of aircraft for hire. It is a branch of aviation that is distinct from private aviation. The purpose of a commercial aircraft is to transport passengers and goods, as opposed to being used for leisure. This industry is a booming business that has many benefits, but is also highly regulated and competitive. Commercial aircraft have very complex mechanisms that require precision and engineering to optimize their efficiency. Along with passenger and cargo flights, commercial airlines also operate cargo flights. These flights carry goods for commercial gain. These flights are usually operated by dedicated cargo airlines, such as UPS Airlines, or they may be operated by a traditional passenger airline.

However, factors such as growing rate of delays in air traffic, lack of security, and stringent environmental regulations regarding carbon emission by aircraft are likely to obstruct growth of the global commercial aircraft market during the forecast period. .

Growing revival orders and deliveries of aircrafts and rise in new aircraft programs are fuelling the growth of the market.

The Narrow Body Aircraft segment is the leading component segment in the market.

Growing number of cancellations or delays in aircraft delivery and increased terrorism & lack of security, and congestion & delays in air traffic are the major factors restraining growth of the market.