High demand for continuous and instant content delivery is major factor driving market growth, owing to increasing inclination of consumers towards interacting with peers through real-time communication and rising use of social media. According to Coherent Marker Insights’ analysis, as of July 2016, over 1.7 billion people were using Facebook monthly, which is about 38% of the U.S. population. Furthermore, increasing adoption of smart devices, increased utilization of broadband connectivity, and development of IT infrastructure that is compatible with 4G LTE and 5G connectivity, are expected to propel growth of the global continuous testing market.

Therefore, these factors are expected to boost demand for global continuous delivery, which consequently will accelerate demand for continuous testing, in order to continuously review and optimize the test suite to eliminate redundancy and maximize business risk coverage.

On-premises deployment segment is estimated to hold the larger market share in 2018, owing to better confidential information control and security from external attacks as systems are held internally in an organization. Owing to this reason, on-premises software can be used to resolve business problems, which in turn will help in improvement of overall business performance. The on-premises segment was valued around US$ 1,869.3 million by 2026.

The cloud deployment segment is expected to exhibit the highest CAGR with 16% over the forecast period from 2018 to 2026. This is due to its applications being cost-efficient and can be deployed even in a basic IT infrastructure. 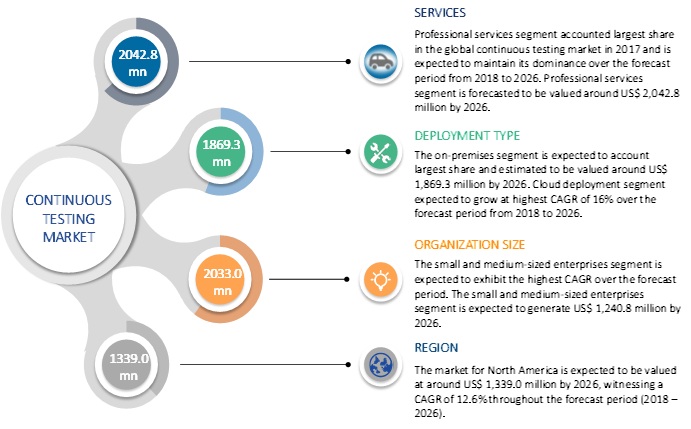 The growth of continuous testing market in this region is attributed to advancement in internet infrastructure, high use of mobile and web applications, and rising number of social media users. For instance, according to Coherent Market Insights’ analysis, Facebook has the most active users of about 1.860 billion per month. That is around 22% of the world’s population. In 2016, total smartphone users in North America increased to about 78% from about 60% in 2015.

Hence, increase in smartphone utilization will proportionally increase demand for internet connectivity. North America is the leading market for 5G network infrastructure technology. This is due to presence of key market player such as T-Mobile, which is planning to establish 5G network infrastructure in the U.S. Additionally, AT&T and Verizon Communication have already successfully completed 5G trial and are expected to deploy it by 2023. These factors are leading to increasing demand for continuous testing in this region.

Increasing adoption of IoT facilitated devices is among key factor for the continuous testing market growth, globally. Internet of Things (IoT) is an ecosystem of connected physical objects that are accessible through the Internet. For instance, according to the Coherent Market Insights’ analysis, the number of connected devices (Internet of Things (IoT) in 2016 was US$ 17.56 billion and it has grown to US$ 20.42 billion, globally. Internet of Things (IoT) involves creation of smart communication environment between smart homes, smart transportation, and smart healthcare systems with the help of several devices in a network that enables transmission of data within these devices such as WSN (Wireless Sensor Network), RFID (Radio Frequency Identification), cloud services, NFC (Near Field Communication), gateways, data storage & analytics, and visualization elements. In continuous testing, IoT application is used for automated security testing. When a software is tested, IoT checks security around the information coming to the sensors, thus IoT helps in monitoring, detecting, prevention of unauthorized access, and managing numerous interrelated devices, efficiently.

*Browse all the market data tables and figures on "Global Continuous Testing Market- Global forecast to 2026”.

Blockchain is a record keeping technology. It is widely used in cryptocurrency to store information and in security la...