Press Release: Europe Cryochambers Market to Surpass US$ 76.5 Million by 2027

Europe Cryochambers Market to Surpass US$ 76.5 Million by 2027

Cryotherapy is an approach that uses a method of localized freezing temperatures to deaden an irritated nerve. It finds application in the treatment of localized areas of some cancers and in diseases related to skin. Cryochambers or cryotherapy chambers are units, which use liquid nitrogen, liquid synthetic air or cooling units for cryogenic application.

Wide application of cryotherapy is expected to propel growth of Europe cryochambers market over the forecast period. For instance, cryotherapy can be used in the treatment of migraines, nerve irritation, mood disorders, arthritic pain, low-risk tumors, dementia and Alzheimer’s disease, and atopic dermatitis and other skin conditions.

Moreover, increasing adoption of cryotherapy by athletes is also expected to aid in growth of the market. For instance, in February 2020, RANGERS FC, a Scottish professional football club, chose CryoAction as its official cryotherapy supplier for the Scottish Premier League.

Poland held dominant position in Europe cryochambers market in 2018, accounting for 18.0% share in terms of value, followed by 2027.

Moreover, lack of fully evolved regulatory pathway is also expected to hamper the market growth. Regulatory pathways for the approval of whole body cryotherapy chambers are not yet developed in Europe, which primarily restricts the widespread use of these devices.

Use of liquefied gases such as oxygen, nitrogen, and carbon dioxide require periodic refilling or replacement of gas cylinders. Therefore, manufacturers may focus on developing cryotherapy devices that can use surrounding air as a cooling agent.

Majority of the players in the market are providing mobile cryotherapy services to end users such as sports clubs and hospitals. For instance, BOC offers fully mobile whole-body cryotherapy chambers in the U.K. 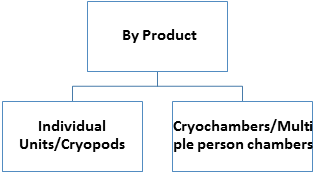 Major players in the market are focused on product approval and launch to expand their product portfolio. For instance, in December 2019, CSA Medical, Inc. received CE Mark approval for its RejuvenAir System, which applies metered cryospray of liquid nitrogen, for the treatment of chronic obstructive pulmonary disease with chronic bronchitis.

Cryotherapy, also called cryoablation, is a non-invasive therapy used for alleviating pain, treating abnormal skin, and localized tumors. Cryotherapy can be administered locally or on the whole body. Surgeons use cryo probes through which liquid nitrogen or high pressure argon gas flows, freezing and destroying tumor cells. Cryotherapy is an alternative tumor treatment option, usually preferred in cases where removal of tumor using conventional surgery is not effective. Cryotherapy is also utilized in treating skin disorders, for anti-aging, muscle pain and recovery, and for muscle-related injuries. Cryotherapies are broadly classified as localized/surgical cryotherapy or cryosurgery and whole-body cryotherapy.

Restraints of the Europe Cryochambers Market

Limited evidence on safety and efficacy of cryotherapy, and use of cryotherapy in multiple applications without supporting evidence is expected to restrain growth of the market over the forecast period.

What are the growth estimates for Europe cryochambers market till 2027?

The Europe cryochambers market is estimated to reach around US$ 76.5 Mn by the end of 2027.

Which are the prominent Europe cryochambers market players?

What are the key factors hampering growth of the Europe cryochambers market?

Confliction in evidence to safety and efficacy of cryotherapy is one of the major factors that is expected to hamper growth of the market over the forecast period.

What are the key factors driving growth of the Europe cryochambers market?

Wide application of cryotherapy is one of the major factors that is expected to propel growth of the market over the forecast period.

Which region/country held the largest market share in the Europe cryochambers market?

Poland held dominant position in the Europe cryochambers market in 2018, accounting for 18.0% share in terms of value, followed by 2027.

Smart baby thermometers are the devices designed and used to measure the temperatures of young children and ...

Vascular patches are the medical products that are used in tissue repair and reconstruction in congenital ca...

Acellular dermal matrix is a biologically derived product, which is devoid of cells. The main components of ...

Isolated organ perfusion involves maintaining an organ in viable status, either by single pass or recirculat...