Europe Sporting Goods Market to surpass US$ 220 Billion by 2027

Sporting goods are also referred to as sporting equipment which includes nets, balls, and protective gear like helmets. They can be classified into those requirements which are used as protective gear or those which are used to play sports. They are gaining traction because of the evolving sports industry which is raising demand for sports preventing equipment in order to prevent injuries. Sporting’s equipment can be found in departmental stores. Football, tennis, racket sports, and bike sports are some of the major sports instruments that can be used to play sports.

The growing prevalence of obesity in Europe fueling the demand for fitness-related sports equipment is expected to foster the market growth of sporting goods. The latest data (2015–2017) from the WHO Childhood Obesity Surveillance Initiative (COSI) show that southern European countries have the highest rate of child obesity. In Cyprus, Greece, Italy, Malta, San Marino, and Spain, approximately 1 in 5 boys (ranging from 18% to 21%) are obese. Therefore, the rising obesity rate in the region is propelling demand for fitness-related goods, which in turn propelling the market growth of sporting goods.

The growing focus of government countries in Europe to promote various sporting activities in the region in order to encourage people to participate in sports activities and improve the quality of life is projected to propel the growth of the sports goods industry. According to the Coherent Market Insights, European Committee on Culture and Education states that sport is an integral part of an individual’s life and helps in the integration of people across cultures, ethnicities, and borders.

Among countries, Rest of the Europe dominated the Europe sporting goods market in 2018, reporting 60% market share in terms of revenue, followed by Germany and France, respectively 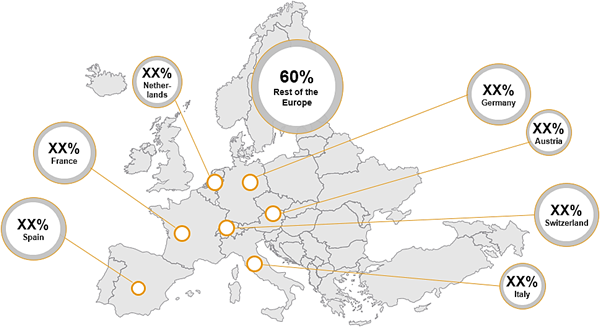 The growing trend of consolidation in the Europe market due to the presence of a large number of players in the market-leading to little space for new entrants, due to a strong entry barrier is expected to hinder the market growth of Europe sporting goods. Moreover, difficulty in the entry of foreign players across few European countries such as Germany and France, the region is expected to experience a downward shift in terms of revenue generation over the forecast timeframe which is expected to restrict the market growth.

Unpredictable and harsh weather conditions due to global warming and other environmental condition in the region is a key factor expected to play a significant role in hindering the growth of the Europe sporting goods market. Moreover, the availability of counterfeit products coupled with the high cost of some sports goods is further anticipated to restrict the growth of Europe sporting goods over the forecast timeframe.

The rising collaboration of fashion and sports is projected to offer potential growth opportunities over the forecast timeframe. According to the Coherent Market Insights analysis, at present major sports brands such as Nike and Adidas are focusing on developing fashionable sportswear to increase their consumer base, as demand for fashionable workout wear is increasing amongst health-conscious consumers in countries across the region. Therefore, increasing the collaboration between sports and fashion is propelling the growth of Europe sporting goods.

The growing textile industry in Europe is expected to foster the market growth of Europe sporting goods over the forecast timeframe. According to the Euractiv, the value of UK textiles is worth almost US$ 9.8 billion to the economy and France ranks 3rd in the EU total textile turnover. Moreover, Spain is the 2nd largest exporter of clothes in Europe. Therefore, the growing textile industry in Europe is projected to foster market growth over the forecast period.

Increasing focus of manufacturers to expand their distribution channel for sporting goods is gaining traction in the market and this is expected to propel the growth of Europe sporting goods market. For instance, in February 2020, Nike, Inc. announced that it is transitioning its Nike Brand business in Brazil, Argentina, Chile and Uruguay to strategic distributor partnerships, enabling a more profitable, capital-efficient and value-accretive business model.

On the basis of product type, in 2018, football accounted the largest market share of 26% in terms of revenue, followed by team sports and tennis, respectively. 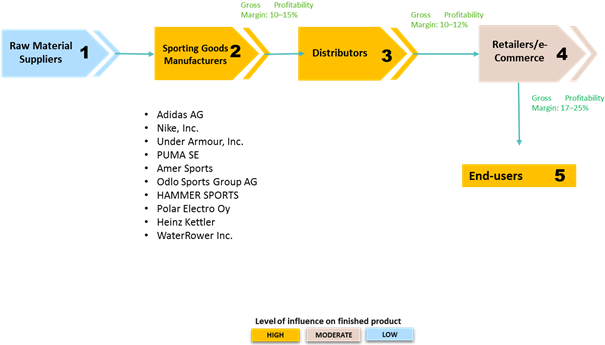 Sports have been always popular among the people in Europe, owing to which the sport and fitness equipment industry has witness a steady growth since last many years. Sporting goods includes different types of products such as apparels, equipment and shoes. They are used various purposes such as body protection, performance enhancement, aesthetics improvement and others.

The Europe sporting goods market has witnessed a surge of growth in terms of revenue in recent past years, owing to the rising awareness regarding health and awareness among the population. In addition to this, the increase in number of obesity cases, especially in the younger the generation, has driven people towards adopting a healthy lifestyle and fitness & sports regimes. Owing to this factor, manufacturers in the Europe sports industry are expanding their production line to meet the rising demands of sporting goods.

Various kinds of sports such as football, tennis, athletics, bike sports and others are vastly popular among the population in Europe. Major leaders in the Europe sporting goods market are focusing on endorsing their brands by collaborating with players and teams from different sport leagues across the region. This scenario is expected to foster the growth of the market in the forthcoming years.