Press Release: Force Sensor Market Is Expected to Witness CAGR of 7.1% During the Forecasted period (2019-2027)

The global force sensor market is estimated to account for US$ 8,929.4 Mn in terms of value by the end of 2019

Force sensors are used to measure to change in physical parameters, which is why it is used in numerous internet of things (IoT) applications such as consumer electronics, home automation, healthcare & life science, environment, transportation, building automation, retail & logistics, security & public safety, and industrial. Growing demand for consumer electronics and home automation is expected to drive growth of the global force sensor market over the forecast period. For instance, in May 2016, SIGFOX, a France-based cellular company, the company is expected to deploy its Internet of Things (IoT) network in 100 cities in the U.S., owing to increasing demand for IoT connectivity in the U.S. Furthermore, in April 2015, Airbus DS GmbH, a subsidiary of Airbus Group, partnered with various small- and mid-sized enterprises (SMEs) with aim to enhance its presence in the growing market of IoT. 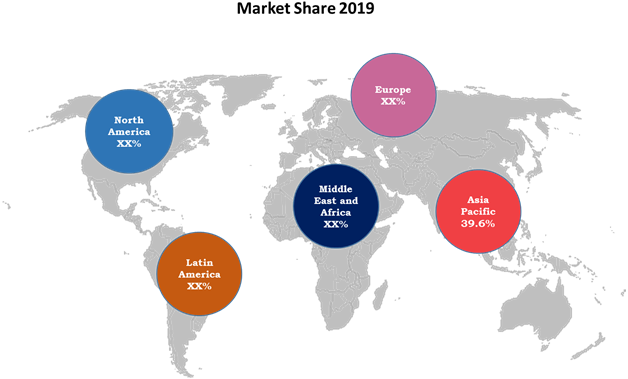 Key players are focused on research and development activities, in order to deliver efficient, cutting-edge technological solutions, in order to cater to growing need from various industries such as healthcare, automotive, industrial, and medical. Each industry and country follows a varied regulatory and endpoint compliance requirements and technology assessment process, which is a long process and requires a long period of time for approval. This, in turn, is expected to hinder the market growth over the forecast period.

There is a high prevalence of counterfeit semiconductor components in the global market, which acts as a major threat for growth of the market. These counterfeit products are used in various sectors such as infrastructure, military, and more. This is a sever issue in numerous countries, since gradual improvement in enforcement of intellectual property rights has been taken. According to the Semiconductor Industry Association (SIA) stats, counterfeit semiconductor components cost the U.S. semiconductor industry around US$ 7.5 billion each year. Hence, such factors are expected to hamper the market growth in the near future.

Increasing adoption of ICT in healthcare and medical sector and growing need to improve the quality of healthcare services is expected to pose lucrative growth opportunities for market players. Force sensors can be utilized in various medical applications such as therapeutic, diagnostic, and preventive. Moreover, growing focus on developing assistive medical devices and health wearable provide significant opportunities for global force sensor manufacturers to develop such products.

Global force sensor market, by technology type segment, piezo-resistive force sensor type sub-segment was accounted for 37.2% market share in 2019 and is expected to grow at a CAGR of 5.8% between 2019 and 2027. 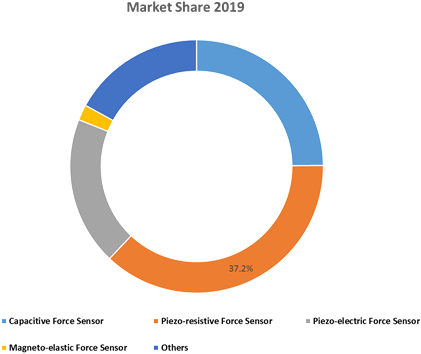 North America semiconductor manufacturing market is constantly evolving with focus on research and development activities. According to Semiconductor Industry Association (SIA), the U.S. semiconductor industry annually invests around one-fifth of revenue in research and development (R&D). According to International Trade Administration (ITA), in 2015, 10 of the top 20 global semiconductor companies were U.S. firms, and U.S. semiconductor companies generated over US$ 165.9 billion in sales and account for 50 % of the US$ 335.2 billion global market. Automotive sector is the potential end-use industry in force sensing technologies in North America.

Localization of manufacturing capabilities and globalization of microelectronics industry in Latin America, new business opportunities are being offered to both electronics and supply chain companies. SIX Semiconductors S.A., Ceitec, and HT  Micron are the prominent companies in Latin America. In 2008, the government of Brazil invested significantly in Ceitec S.A., a government-owned organization, owing to growth of the semiconductor industry. The primary objective of this investment was to facilitate production of semiconductor components in the country. 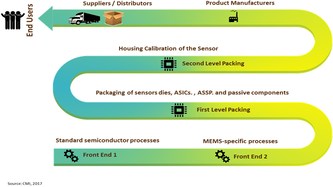 A force sensor measures the force applied to it. These sensors are majorly used to converts the externally applied force on it, into the equivalent digital signals or electric current, which will further assist the system for detecting, monitoring or measuring the magnitude, direction or both of the applied force. The force sensors are majorly getting used in many applications in a variety of industries such as healthcare, manufacturing, automotive, robotics. Force sensors are adopted in traffic engineering such as rail monitoring, biomechanics, process monitoring.

Rising demand for robotics across various end-use industries such as manufacturing, automotive, construction is expected to propel the demand for force sensors over the forecast period. The force sensor is getting used in the robotics industry for safety purposes, to ensure that robots don’t harm anyone by exerting extra force. For instance, according to IFR (International Federation of Robotics), in 2018 sales value of robots has touched 16.5 billion USD. In addition, IFR forecasts average growth of 12 percent per year from 2020 to 2022, in terms of shipments.

In addition, an increasing number of sensors getting used in various automotive electronic control applications, such as for checking the tire or oil pressure, and engine management systems (MAP/BAP), is further expected to propel the market demand for force sensors over the forecast period.

What are the growth estimates for force sensor market till 2027?

Which are the prominent force sensor market players across the globe?

What are the key factors hampering growth of the force sensor market?

Lengthy regulatory approval processes, coupled with forgery in semiconductor components are some of the major factors that are expected to hamper growth of the market over the forecast period.

What are the key factors driving growth of the force sensor market?

The increasing number of sensors per vehicle is one of the major factors that is expected to propel growth of the market over the forecast period.

What is the Compound Annual Growth Rate (CAGR) of the force sensor market for next 8 years?

Which region held the largest market share in the force sensor market?

Among regions, Asia Pacific is expected to hold a dominant position in the global force sensor market in 2019, accounting for 39.6% share in terms of value, followed by Europe, and North America respectively.

Market Overview The power transformer is a type of t...

Market Overview A thermoelectric module is a solid-s...