Genome engineering is a process of insertion, deletion, modification or replacement of DNA bases in an organism. There are two types of gene therapy, Ex-Vivo Gene Therapy and In-Vivo Gene Therapy. Ex-vivo gene therapy involves the transfer of genes in cultured cells and then reintroducing in patient, while in In-vivo gene therapy, genes are directly delivered in cells of a particular tissue. Key companies such as CRISPR Therapeutics AG, Editas Medicine, Inc., and Intellia Therapeutics, Inc. are focusing on developing In-Vivo and Ex-vivo gene therapy. Major techniques used in genome engineering are CRISPR, TALEN, and ZFN. CRISPR (CRISPR-Cas9). These are innovative genome editing tools that enable researchers to edit parts of the genome by adding, removing, or altering sections of the DNA sequence. CRISPR is an accurate, faster, and cheaper technique for editing DNA as compared to others methods such as TALEN and ZFN. Transcription activator-like effector nucleases (TALEN) is a technology widely used in live cell gene editing. Zinc-finger nucleases (ZFNs) is an artificial restriction enzyme, which simplifies targeted editing of genome by creating double-strand breaks in DNA at user-specified locations.

Key players in the market are focusing on developing novel technologies and launching new products for genome engineering, in order to increase their market share. For instance, in February 2018, Sangamo Therapeutics, Inc. received clinical trial authorization (CTA) from Medicines and Healthcare Products Regulatory Agency (MHRA) in the U.K. for its SB-FIX, a zinc finger nuclease (ZFN)-mediated in-vivo genome editing treatment for hemophilia B. CTA has allowed for the beginning of Europe's first in-vivo genome editing study. In 2017, Integrated DNA Technologies, Inc. launched the first Cas9 enzyme variant, which reduces off-target effects in CRISPR genome editing. The launch of latest Cas9 enzyme variant is a major step towards therapeutic use of CRISPR. In 2017, Scientists at Salk Institute for Biological Studies, modified CRISPR to epigenetically treat diabetes, kidney disease, and muscular dystrophy. They developed a latest version of CRISPR/Cas9 genome editing technology, which allows for activation of genes without creating breaks in the DNA. The development of such novel technologies is expected to be major driving factor for growth of global genome engineering market. 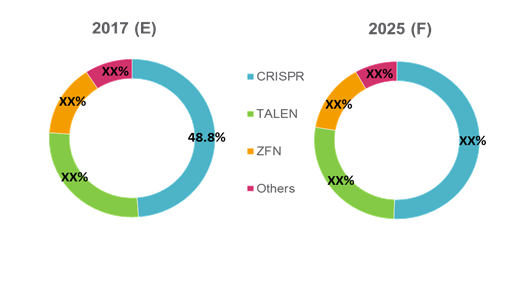 Moreover, increasing funding and investments for the development and research of new genetic engineering technologies is also expected to drive market growth. For instance, in January 2018, the U.S. National Institutes of Health (NIH) announced to grant US$ 190 million for genome editing research. This new program, Somatic Cell Genome Editing, will award funds to biomedical researchers over the following six years. The support from major research organizations such as NIH is expected to attract more researchers in this field, which may lead to advancements in technology and also aid in growth of the market.

Genome engineering is a technique in which a DNA is inserted, deleted, modified or replaced in the genome of a living organism. Research and development activities are conducted in genome engineering for the development of novel technologies. For instance, in 2017, Synthego Corporation launched a CRISPR Pioneers Program to expand genome engineering research. Researchers are majorly focusing on developing treatments for cancer and rare diseases with the help of genome engineering tools such as CRISPER. Many genome technologies are under trial for treatment of such diseases, and are expected to receive approvals in the near future.

Development of novel technologies in genome engineering field is expected to significantly drive growth of the global genome engineering market in the near future. For instance, in 2017, Merck KGaA— Germany-based company—developed a new genome editing tool dubbed 'proxy-CRISPR', providing access to previously inaccessible microenvironments of the genome by modification of chromatin modifications. In 2017, Benson Hill Biosystems, Inc.—an agricultural technology company—launched its latest CRISPR 3.0, to increase innovators’ access to gene editing. CRISPR 3.0 is a latest innovative genomics tool, which is expected to improve crop performance. Development of such novel technologies by major key players is expected to create a conducive environment for growth of market.

Furthermore, increasing strategic collaborations by major key players for genome engineering technologies is also expected to drive market growth. For instance in 2015, ToolGen, Inc.—a South Korea-based company—collaborated with Thermo Fisher Scientific and licensed its CRISPR/Cas9 intellectual property portfolio to Thermo Fisher Scientific. This license agreement has strengthened the relationship between ToolGen and Thermo Fisher in the area of genome editing. In 2014, Cellectis Bioresearch and Thermo Fisher Scientific entered into a strategic collaboration agreement covering the uses of TAL nucleases under the brand name TALEN. As per the agreement, Thermo Fisher Scientific is granted a worldwide license under Cellectis’ rights to the TAL nucleases outside the therapeutic field. Thermo Fisher will market TALEN for these applications under its Life Technologies brand. In 2014, Bluebird Bio, Inc. acquired Precision Genome Engineering (Pregenen) at US$ 139.9 Mn. This acquisition has helped the company to use Pregenen’s MegaTALs, originally developed by Precision Genome Engineering. In 2014, Biogen Idec and Sangamo BioSciences, Inc. entered into a collaboration agreement for the development of treatment of Hemoglobinopathies. According to the collaboration, Biogen Idec will use Sangamo's proprietary zinc finger nuclease (ZFN) genome-editing technology.

Cancer is an abnormal growth of cells in the body, also known as malignancy. It has the potential to replicate itself ...

Since last few years, bacteriophages have been researched as a new alternative to antibiotics. In this therapy, the vi...