Graphene is a single-layer of atoms, tightly bound in hexagonal honeycomb lattice. It is the lightest material, thinner than paper, and stronger than steel. It finds applications in composites and coatings, electronics, biomedical, membranes, sensors, and energy. In addition to this, graphene is considered as an efficient catalyst in the chemical industry, owing to its properties such as high surface area and adsorption capacities. Increasing demand for chemicals globally is expected to increase demand for graphene and thereby drive the global graphene market growth. For instance, according to the ‘European Chemical Industry Council’, global sales of chemicals grew by 4.6% from US$ 3,714.57 billion in 2016 to the turnover of US$ 3,884.48 billion in 2017.

Graphene conductive films are also used as a raw material in automotive/cars to make them lighter and safer. Growth of the automotive industry worldwide is expected to fuel growth of global graphene market. For instance, according to the International Organization of Motor Vehicle Manufacturers (OICA), in 2016, the total world motor vehicle production was 94,976,569 units, which increased to 97,302,534 units in 2017.

Moreover, key players in automotive industry are also exploring properties of grapheme, so as to use it in automotive parts to enhance performance. For instance, in October 2018, Ford Motor Company announced that it will become the first automaker to use graphene parts in its vehicles. The company is considering to use graphene in under-hood components of Ford vehicles such as Ford F-150 and Mustang.

However, the toxic nature of graphene and risk involved during the graphene manufacturing process is expected to act as a major restraint for growth of the global graphene market over the forecast period. According to a study titled, ‘Assessment of the toxic potential of graphene family nanomaterials’ published in the ‘Journal of Food and Drug Analysis’, in 2014, majority of graphene-based materials currently available are cytotoxic or genotoxic, which may pose a threat to growth of global graphene market.

For instance, according to the paper, ‘Nanotoxicity of Graphene and Graphene Oxide’, published in the journal ‘Chemical Research in Toxicology’, in 2014, generation of reactive oxygen species in biological cells for human is the most significant cytotoxicity mechanism of graphene.

North America accounted for major share in the global graphene market in 2018, and is projected to maintain its dominance over the forecast period. Furthermore, Asia Pacific is expected to record the fastest growth during the forecast period. Graphene majorly finds its application in electronic and automotive industry, owing to its excellent electrical and thermal conductivities. In Asia Pacific, both electronic as well as automotive industries are growing rapidly and are major end users of graphene. Therefore, high growth of these end-use industries is expected to boost graphene demand in the region.

For instance, according to India Brand Equity Foundation report on electronics industry June 2017, the electronics market in India is expected to reach US$ 400 billion by 2020, from US$ 100 billion in 2016. Moreover, according to the U.S. International Trade Administration (ITA), average number of vehicles produced in China between 2012 and 2014 was 17.8 million units, which made China the largest vehicle producer between 2012 and 2014.

Based on application, conductive films & inks segment held the largest share and contributed for 37.4% in global graphene market in 2018, in terms of revenue. Graphene conductive inks and transistors are widely used in electronic and automotive applications. 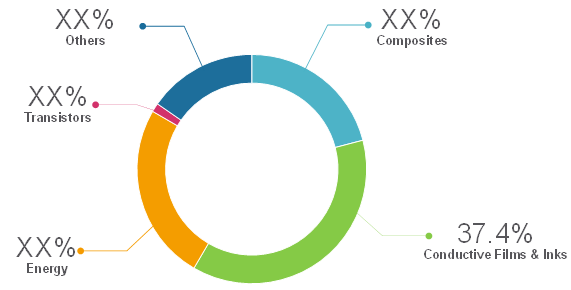 Increasing use of graphene in the development of various instruments and equipment is expected to boost the market growth. For instance, in August 2019, researchers from Chalmers University of Technology, Gothenburg, Sweden, developed a quantum-limited detector using graphene.

Use of graphene in the healthcare sector is also expected to aid in growth of the market. For instance, in August 2019, researchers from King Faisal University, Saudi Arabia, reported development a hybrid nanoparticle that consisted of a Doxorubicin-loaded reduced graphene oxide that is stabilized with chitosan for feasible and viable delivery Doxorubicin photo-thermally in the treatment of prostate cancer.

Research and development related to graphene is expected to propel the market growth. For instance, in May 2019, researchers from Pandit Deendayal Petroleum University, India, developed a new method to fabricate graphene sheets from camphor using atmospheric chemical vapor deposition.

Graphene is honeycomb sheet for carbon atoms and is the building block for other graphitic materials. It is tougher than steel, lighter than aluminum, harder than diamond, and more elastic than rubber. The potential applications of graphene include energy generation, batteries, transistors, super capacitors, antennas, solar cells, water filters, computer chips, and others.

Major players operating in the industry are undertaking various strategic initiatives such as collaborations and business expansion, in order to maintain their position in the competitive business environment. For instance, in April, Graphene Square, engaged in commercialization of graphene material and graphene films to be used as a transparent conductor, opened its U.S. office in order to expand its business in the North America region.

Among product type, in 2018 graphene nanoflakes segment contributed for more than half of the revenue share in the overall graphene market across the globe. Whereas, CVD (Chemical Vapor Deposition) Films segment is projected to grow at fastest CAGR of 45.8% during the forecast period (2019-2027). Key players functioning in global graphene market are focused on expanding their business, in order to meet increasing demand from end-use industry. For instance, in February 2019, Grolltex, Inc., a nano materials & products company, completed its capacity expansion at its CVD graphene monolayer fabrication facility in San Diego, California and increased its production to 30,000 eight-inch wafer equivalents per year. The company states that this is the only commercial CVD monolayer graphene production facility in California and it is the largest capacity plant of its kind in the U.S.

Based on application, global graphene market is segregated into composites, conductive films & inks, energy, transistors, and others. Others segment includes application of graphene in biosensors and as a chemical catalyst. For instance, according to a paper, ‘Self‐healable Multifunctional Electronic Tattoos Based on Silk and Graphene’, published by Advanced Functional Materials Journal in February 2019, a self-healing, biocompatible, and multifunctional electronic tattoo (e-tattoo) was developed by incorporating graphene with silk fibroin/Ca2+ films, which was designed to act as biosensor.

What are the growth estimates for graphene market till 2027?

Which are the prominent graphene market players across the globe?

What are the key factors hampering growth of the graphene market?

The toxic nature of graphene and risk involved during the graphene manufacturing process are some of the major factors that are expected to hamper growth of the market over the forecast period.

What are the key factors driving growth of the graphene market?

Rising demand of graphene in various applications such as conductive films & inks, composites, and energy applications is one of the major factors that is expected to propel growth of the market over the forecast period.

What is the compound annual growth rate (CAGR) of the graphene market for next 8 years?

Which region held the largest market share in the graphene market?

Among regions, North America accounted for major market share in the global graphene market in 2018.

Geocells are also known as geogrids and is a subset of geo...

Feldspars are a group of rock-forming aluminium tectosilic...

Carbon black is a compound produced by the incomplete comb...