Heparin is used to prevent or treat certain blood vessel, heart, and lung conditions. It is also used in blood transfusion, blood samplings during prophylaxis treatment, and for treatment of blood clotting disorders Heparin may be used to diagnose and treat a serious blood condition called disseminated intravascular coagulation. Heparin is sometimes used alone or in combination with aspirin to prevent pregnancy loss and other problems.

Furthermore, increasing number of surgeries and rising prevalence of diseases such as deep vein thrombosis and coronary heart disease, are fueling demand for heparin, eventually driving growth of the heparin market, during the forecast period. According to the American Heart Association 2018 report, coronary heart disease accounts for 1 in 7 deaths in the U.S., killing over 366,800 people every year. As per the same source, the overall prevalence for myocardial infarction (MI) in the U.S. is about 7.9 million, or 3 percent in U.S. adults.

Side effects associated with the use of heparin are the major restraining factors of the market. The main side effect of heparin is bleeding. Heparin can cause spontaneous bleeding from several places in the body including open wounds or surgical sites, intestines and stomach, ovaries and uterus, and mouth and gums. Another serious side effect of heparin is a condition known as heparin-induced thrombocytopenia (HIT) in which heparin induces the body's immune system to develop antibodies against its own platelets, causing risk of bleeding due to reduction in platelets.

On the basis of region, the global heparin market is segmented into North America, Latin America, Europe, Asia Pacific, Middle East, and Africa. Europe heparin market is expected to generate significant revenue share during the forecast period, owing to growing geriatric population and rising prevalence of long-term survivors of acute myocardial infarction (AMI). Survivors of AMI are at high risk of a recurrent myocardial infarction, as well as other manifestations of cardiovascular disease such as stroke. According to Lancet journal, 2017 report, acute myocardial infarction is the leading cause of hospital admissions and mortality in the UK and across the world.

Asia Pacific heparin market is expected to grow at the highest rate during the forecast period, owing to increasing incidence of myocardial infarction among regional population. According to a study published by National Center for Biotechnology Information (NCBI) in 2015, Asian population is more susceptible to MI than white people. There are 50% higher cases of MI in South Asians than in white people in the UK. 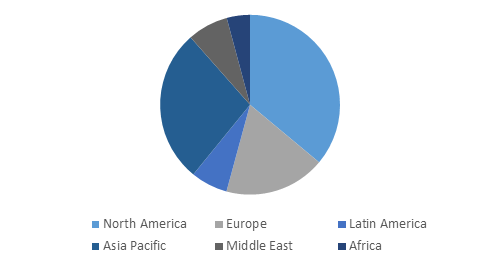 Heparin is an anticoagulant used to decrease the clotting ability of blood and help to prevent harmful clots from forming in blood vessels. It is sometimes referred as a blood thinner, although it does not actually thin the blood. Heparin does not dissolve already formed blood clots, but it can prevent the clots from becoming larger and causing more serious problems. Pharmaceutical-grade heparin is derived from animal tissue. Heparin is commonly used in the treatment of coronary heart disease, pulmonary embolism, deep vein thrombosis, and atrial fibrillation, and in the prevention of thrombosis during extracorporeal membrane oxygenation and cardiopulmonary bypass.

Rising cases of conditions such as coronary heart disease, pulmonary embolism, and deep vein thrombosis is one of the major factors for increased demand of heparin drugs in the market. Myocardial infarction (MI) is one of the major complications of coronary heart disease. According to the American Heart Association 2018 report, coronary heart disease is the leading cause (43.8%) of deaths due to cardiovascular disease in the U.S., followed by stroke (16.8%). As per the Centres for Disease Control and Prevention (CDC) 2015 report, deep vein thrombosis affects nearly 900,000 individuals in the U.S. each year.

Despite major applications in chronic conditions, heparin is poorly absorbed by the intestine, therefore it must be given intravenously or subcutaneously. Moreover, the drug creates a significant risk of excessive bleeding due to anticlotting effect. Heparin also induce conditions such as thrombocytopenia (reduced number of circulating platelets) and hypersensitivity reactions. These factors can hamper the heparin market, during the forecast period.

What are the growth estimates for heparin market till 2026?

The global heparin market is estimated to surpass US$ 14 Billion by 2026.

Which are the prominent heparin market players across the globe?

What are the key factors hampering growth of the heparin market?

Side effects associated with the use of heparin is one of the major factors that is expected to hamper growth of the market over the forecast period.

What are the key factors driving growth of the heparin market?

Increasing incidence of coronary heart disease, pulmonary embolism, and deep vein thrombosis is one of the major factors that is expected to propel growth of the market over the forecast period.

What is the compound annual growth rate (CAGR) of the heparin market for next 8 years?

The global heparin market is estimated to exhibit a CAGR of 5.1% over the forecast period.

Which region is dominating the heparin market growth?

Among regions, Europe is expected to generate significant revenue share during the forecast period, owing to growing geriatric population and rising prevalence of long-term survivors of acute myocardial infarction (AMI).