Press Release: Hot Dogs and Sausages Market to Surpass US$ 95.13 Billion by 2027

A hot dog is a grilled or steamed sausage sandwich consisting of a hot dog bun along with a meat sausage. Hot dog bun is a bakery product made of a bread and a sausage is primarily composed of ground meat such as pork, beef or chicken and is seasoned with spices such as cinnamon, garlic, paprika or cumin seeds among others. Hot dogs and sausages are offered with various flavors such as honey, brown sugar, barbeque, spicy, and teriyaki.

Among meat type, chicken segment is expected to hold significant share in the hot dogs and sausages market over the forecast period, owing to rising awareness regarding health concerns caused due to other meat types. Pork and beef are considered as red meat, which are type of mammalian muscle meat. According to the World Health Organization (WHO), red meat contains heterocyclic aromatic amines and polycyclic aromatic hydrocarbons, which are considered as carcinogens (cancer causing agents). Moreover, the World Cancer Research Fund (WCRF) International (an authority on cancer prevention research) recommended limiting the consumption of red & processed meat and considering poultry meat such as a chicken as a potential alternative to red meat. Therefore, chicken is a relatively safer choice for consumption and is therefore, projected to witness growth over the forecast period.

Moreover, long-term consumption of sausages made from red meat are considered to be harmful, as they contain chemical known as haem that can cause cancer. Red meat includes beef, lamb, and pork. For instance, according to Cancer Council New South Wales, Australia, eating over 700 grams (raw weight) of red meat a week increases risk of bowel cancer. Therefore health concerns related to consumption of red meat are expected to restrain growth of the hot dogs & sausages market.

Players operating in the global hot dogs and sausages market are adopting various growth strategies to strengthen their market presence. Due to increasing trend of organic and natural meat products, various key players are focusing on offering organic sausages to attract more consumers. For instance, sausages offered by Organic Prairie Company are prepared from 100% organic meat. Organic meat is obtained from a livestock that is fed with organic feed, which is free from any toxic pesticides or synthetic fertilizers. 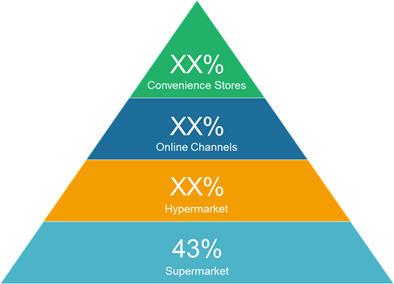 Moreover, various key players are focused on introducing new products, in order to enhance their product portfolio. For instance, sausages industry is segmented into both non-vegan and vegan categories. Companies such as Linda McCartney Foods provide vegetarian sausages in frozen product range to attract vegetarian population. The vegetarian sausages do not contain red meat but are healthier, as they are filled with 60 to 65% of high amount of protein along with other ingredients such as soy protein concentrates, sulfites, raising agents, and stabilizers.

Sausage is a meat product seasoned with spices and herbs, which are stuffed together into a casing and served with a partially sliced bun. Demand for hot dogs & sausages is expected to increase during the forecast period, owing to rising preference towards healthy food. Moreover, growing food truck business is fueling growth of the global hot dogs and sausages market, as they are easy to cook and can provide different varieties to consumers.

Among regions, North America held significant market share in global hot dogs & sausages market in 2018, owing to increasing popularity of hot dogs among the populace in the region. For instance, according to retail sales data of National Hot Dogs and Sausages Council (NHDSC), consumers in New York country spent more money on hot dogs in retail stores accounting for around US$ 93.2 million, than any other market in the country in 2018. Moreover, residents of Los Angeles stood second with US$ 72 million spent on hot dogs in 2018.

Furthermore, Asia Pacific is expected to witness growth in the global hot dogs & sausages market over the forecast period, owing to rising preference for fast food among the younger generation in countries such as China, India, Japan, and Australia. For instance, according to Food and Agricultural Organization (FAO) data, China ranked third in production of chicken meat globally in 2017 whereas, China, India, Japan and Indonesia were considered among the top 10 chicken producing countries globally in 2017. Moreover data also shows that production of chicken meat in China was 1,20,75,000 Mtons in 2015 which increased to 1,28,55,950 Mtons in 2017.

What are the growth estimates for hot dogs and sausages market till 2027?

The global hot dogs and sausages market is estimated to reach US$ 95.13 Billion by 2027.

Which are the prominent hot dogs and sausages market players across the globe?

What are the key factors hampering growth of hot dogs and sausages market?

Long-term consumption of sausages made from red meat are considered to be harmful, as they contain chemical known as haem that can cause cancer. This is one of the major factors that is expected to hamper growth of the market over the forecast period.

What are the key factors driving growth of the hot dogs and sausages market?

Rising demand for hot dogs and sausages due to increasing trend and awareness about food products with high nutrient content, among populace is one of the major factors that is expected to propel growth of the market over the forecast period.

What is the compound annual growth rate (CAGR) of the hot dogs and sausages market for next 8 years?

Which region held the largest market share in the hot dogs and sausages market?

Among regions, North Americaaccounted for the largest market share in 2018.

Grape seed extracts are dietary supplements that are prepared by removing, drying, and pulverizing the grape...

The crystallized form of sugar syrup known as candy has been gaining high demand all over the globe and espe...

Vitamin A is a fat-soluble unsaturated organic compound often found in natural food products such as carrots...