Cigars are rolled bundles of fermented tobacco that is rolled in paper or tobacco leaves. The increasing exposure of Indian population towards other cultures such as European and American cultures is estimated to favor the cigars and cigarillos market in the coming years. The Indian cigars and cigarillos market is estimated to surpass US$ 3,948.01 thousand by the end of 2028 in terms of revenue, exhibiting a CAGR of 4.5% during the forecast period (2021 to 2028) 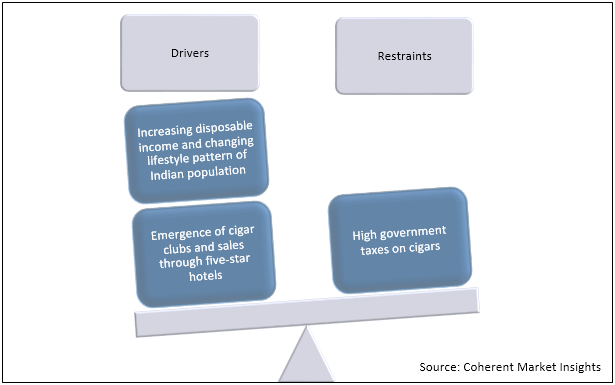 The increasing disposable income and changing lifestyle of the Indian population are expected to drive the market growth of cigars and cigarillos. Rapid economic growth in India has led to a substantial increase in the size of the middle class population, and rising household income is resulting in higher disposable incomes. According to a report by FICCI (Federation of Indian Chambers of Commerce & Industry), the increasing demand outlook from households presents an excellent opportunity for companies and provides a major boost to India’s consumption pattern. The Indian middle-class population has been a major driving factor for the changing lifestyle patterns, owing to fast growth of the service sector and rising disposable income, which is then expected to drive the increased spending and generate consumer demand for a wide range of new goods and services. The monthly per-capita income in 2018 was estimated to be at US$ 150.72. Moreover, according to the annual national income and GDP 2019-20 data released by the Ministry of Statistics and Programme Implementation (MoSPI), the per-capita net national income during 2019 was US$ 1,794.9 showing a rise of 6.8% as compared to US$ 1,680.1 during 2018.

In India, the high government taxes on cigars is hampering the product demand. Currently, Indian government levies 28% GST rate on cigars and cigarillos with an additional cess up to 21% or US$ 0.056 per sticks are levied on these products. Furthermore, in its 2017-18 budget, the Government of India increased the excise duty on cigars and cheroots to 12.5% or US$ 54.7 per thousand sticks.

Organizing events to attract new consumers is expected to offer lucrative opportunities to the market players in the near future. For instance, in February 2020, Cigar Conexion organized an event at its exclusive lounge located in Khan Market, Delhi, where they promoted the Indian Motorcycle Cigars (U.S.-based premium cigar manufacturer) as smoking samples paired with Bourbon whisky for their visitors. The company is known to often organize such events in order to create awareness about cigars among Indian consumers. 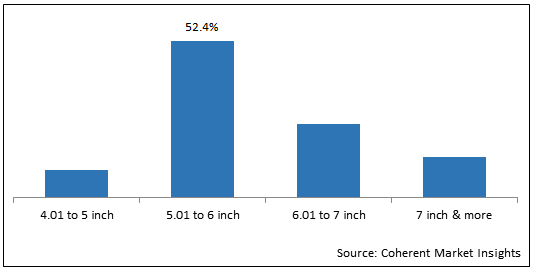 On the basis of size, in 2020, the 5.01 to 6 inch segment accounted for 52.4% of the revenue share. These cigars are small enough to be enjoyed for around 30 to 45 minutes, yet large enough to offer complex flavor profile that develops during the smoking. The Djarum Wood Tip Vanilla and Jose L Piedra Conservas are some of the cigars from this category, which are available in Indian markets.

On April 15, 2020, the central government of India banned the sales of products such as liquor and tobacco during the extended lockdown to ensure social distancing, which is a key tool in the fight against the coronavirus. The prices of tobacco related products shot up during this time due to prohibition of sale. Accessibility to cigars & cigarillos were severely impacted during the lockdown. The government had enforced restrictions on social gatherings, which in turn halted the number of events organized by cigar clubs. The lockdown restrictions limited the sales of cigars & cigarillos in India for a short period in 2019. Restrictions on international travelling resulted in low travelers, which is expected to have impacted sales of cigars & cigarillos through duty free stores in India.

Cigars and cigarillos have been gaining high demand in the recent years due to the rise in disposable income of the Indian population over the past few years. For instance, according to the India Brand Equity Foundation (IBEF), in 2019, India's per-capita monthly income increased by 6.8% to reach US$ 161.02. Moreover, cigars are also being recognized as a lifestyle product associated with status. People with high net worth are adopting the consumption of cigars. Indian consumers are being inclined towards luxury brands and consider cigars as a part of high-end lifestyle.

What will the market size for Cigars and Cigarillos be in 2028?

The increasing disposable income and changing lifestyle of the Indian population is expected to drive the market growth during the forecast period.

Organizing events to attract new consumers in India is projected to offer lucrative opportunities for players in the near future.

The imposition of high taxes by the Indian government serve as a restraining factor for the market.

What is the current market size for Cigars and Cigarillos India?

Ready to mix food are classified as conveniences and healt...

Chocolate is prepared with roasted and ground cacao seeds ...

Organic tobacco does not contain any harmful chemicals and...